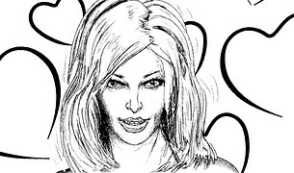 Hello people!
I must confess I’m surprised at the response to our post on “crush” It’s good to see people come share their life,not just for sharing sake,but to help those who are still going to pass through the same path,to avoid potholes. Here’s our first take ,from Olivia.
My name is Olivia.
It’s nice to have this opportunity to share this .I thank the Gistwheel admin for replying to my earlier mail.
I will try to be straight to the point with my “testimony”
.I was a sophomore in high school in and I fell HARD for my best friend’s brother. I was kind of mousy and quiet. He was tall with lots of lean muscle, perpetually (and probably strategically) tousled hair, and crazy blue eyes. He was the smartest guy in our grade, but also kind of a jackass, one of those guys who adds his douchey commentary to everything. He told his sister he liked me, and she obviously relayed the message, so I became a blushing, mumbling idiot for a few months. Then, at a Christmas party, he told me I was beautiful, and a very sweet and innocent one,then he kissed me..one kiss that went deep through the whole of me..and I was a goner! There was a lot of hand holding involved. Everyone told me that I “tamed” him and that he was different and sweeter around me, and I believed them, because I was16 and stupid. I totally thought we would be together forever and ever and someday tell our grandkids about our high school days.Anyway, he dumped me after a year for a girl named Alexa, who was older and bolder and had kind of a “reputation”at the time. I was completely and utterly devastated. Because I remained (and still do!) close friends with his sister, I still saw him pretty often…every single time, I felt heartbroken all over again, in the way that only teenage girls can. This went on for YEARS.One weekend our junior year of college, he invited his sister to visit him at his school about an hour away. She, in turn, invited me to come along, and I immediately said yes, knowing it was a bad idea. He sent me texts all week telling me how glad he was that I was coming and how excited he was to see me. When we got there, he gave me a hug and told me I had gotten even prettier, and I knew right then what was going to happen.Long story short: we all got drunk, I lost my virginity to him, and he told me he loved me. For weeks after that, he begged me to come back myself, told me he always thought we belonged together, that we could start over again. When I finally caved and said yes, he told me it was all a big joke and that he essentially just wanted to see how far he could push me.I’ve seen him a few times since then, but the only time we talked was about 3 years ago, just a couple weeks before I met my now-husband. We ran into each other at a bar in our hometown. We were both kind of drunk. He came over to say hi, and I went off on him, screaming that he broke my heart twice just for the hell of it, and I would never forgive him, and I deserved better. Then I stormed out. It remains one of my proudest moments, and the first time I ever really felt free of the weird hold he had on me.Now I’m married to the man of my dreams and living happily ever after. It was one of the turning points in my life. I hope someone out there open their eyes wider,love shouldn’t be so blind anymore!
Olivia
Napier,New Zealand.