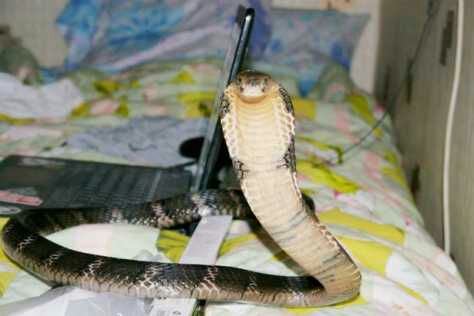 can you keep a cobra? before you read the rest of this article just take a few minutes to watch the video above.. what do you see?

yaaaaaaaaawwwwwwkkkk!    i can hear you scream. well people have been keeping cobras for ages and in most cases it was a nice tale at the end of it.most people were able to successfully turn these “vicious” snakes into home pets. is it not amazing (and very weird) that this small girl has these snakes  as pets,watching over her when she sleeps and play with her when she is awake?   lets look briefly at their anatomy  and behaviour.       Overall, there are around 270 types of Elapid Snakes (that include the Cobras and their relatives such as the Taipans, Adders, Mambas and others). There are around 28 types of Cobras, who are regarded as true Cobras. King Cobras are just one type of cobras, although they belong to a genus of their own.: Cobras are the only snake in the world that can spit their venom, and they are accurate up to about half their own length! imagine what those cobras would don to anyone who comes near that little girl!! Cobras have a “Jacobsen’s Organ” (like most snakes) that gives them super smelling ability.  which kinda points to the fact that they can perceive the girl and her family. most families have this ” deadly” reptile as pets and they do not attack the  family.

They are great hunters and  can sense tiny changes in temperature, which helps them track their prey at night.
a group of cobras is called a quiverAs Cobras grow bigger, A cobras hood is created by the extension of the ribs behind the snakes’ head. It is primarily used to make the Cobra appear bigger and scarier. This amazing hood contains loose skin which the Cobra can inflate with air from his lungs, expanding the movable ribs.

Do you know that Cobras don’t always inject venom when they bite something? Well, they can do a “dry bite” if they choose to, without injecting the venom automatically

can you keep a cobra?

some people whose only fear is the venom go for venomoid cobras. A venomoid is a formerly venomous snake whose venom glands or ducts have been removed or destroyed in order to make it a “harmless” pet. some people however do not buy the idea of de-venomizing .they feel that devenomizing removes that  “thrill” of having “a true cobra”

venomous or venomoid, can you keep a cobra?