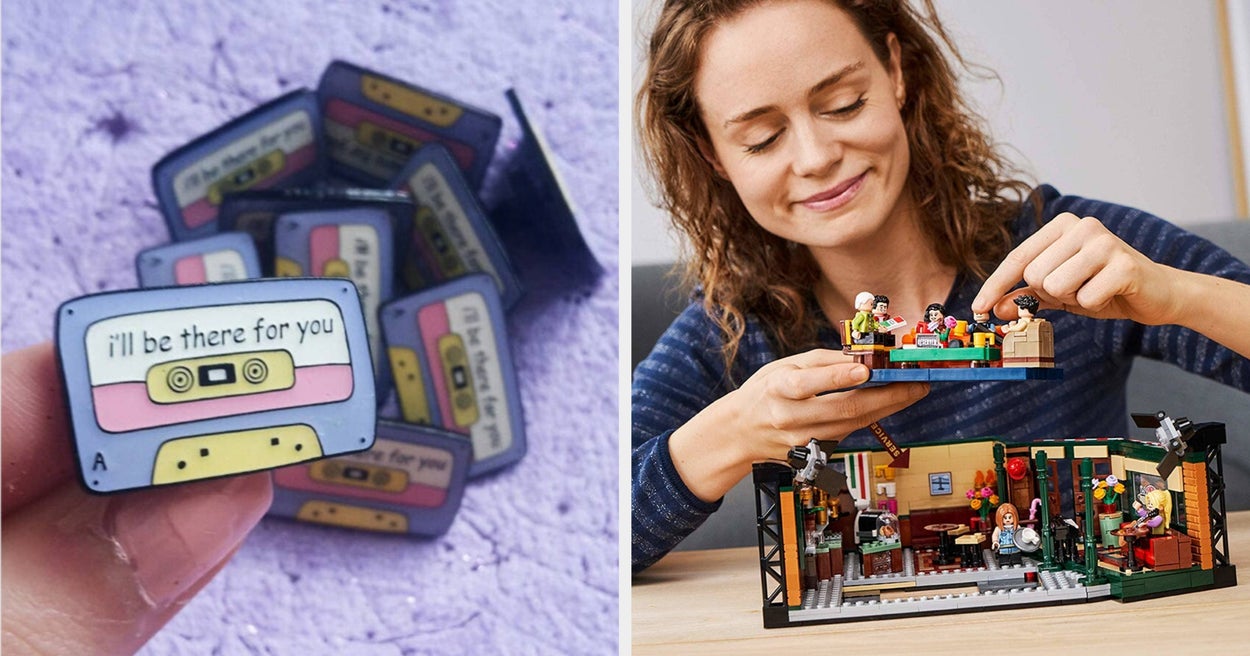 While we’re doing our best to make sure the products we feature will arrive in time for Christmas, shipping times are especially tricky this year and can vary depending on where you live, which product you purchase, and more. Shop early and be sure to double check the retailers’ websites for shipping information to ensure that your gift will arrive in time for the 25th!

An 1000-piece puzzle they can work on while trying to *actually* determine whether Ross and Rachel were really on a break.

A T-shirt with, dare I say, one of the most ICONIC quotes on it because I know that you know that I know it’s true.

A floor plan art print to hang in their own apartment, because we all know we’ll never be as lucky as Monica and have a grandma who magically gives you her beautiful and huge rent-controlled apartment, no strings attached.

A sticker of Hugsy that’ll have any true fan of the show screaming “WHERE DID YOU FIND THIS!?” because, honestly, it’s *the* most subtle nod to the show you’ll probably ever find.

A Central Perk LEGO set with little versions of the cafe plus all the characters that someone of any age will want to put together and play with.

A mug so they can sip some tea and think about a better way they could have gotten that couch up those stairs.

A trio of Friends-themed scrunchies for your pal who has never stopped dressing like it’s the ’90s (and good for them because scrunchies are baaaaack!).

A trifle bowl to help them recreate Rachel’s famous recipe and have “Trifle Time” next Thanksgiving. Just don’t forget to add the lady fingers, jam, homemade custard, beef sautéed with peas and onions, bananas, and whipped cream on top.

And Friends: The Official Cookbook filled with more than 100 recipes inspired by the show, including Monica’s Friendsgiving feast, Phoebe’s Grandmother’s cookies, Joey’s meatball sub, and even the moist maker sandwich. Their ~friends~ will be so happy to sample all their creations, of course.

A “Save The Drama For Your Mama” shirt worn by the one and only Rachel Green because she is, and will always be, our one true style icon. ’90s forever baby!!

An eyeshadow palette featuring recognizable names like “Regina Phalange” and “unagi” — here’s to hoping they take their time and don’t end up looking like Rachel when she let Ross do her makeup.

A Joey Tribbiani sequin pillow cover you can make just look like a plain sequin pillow and then when they brush it to the other side, you can yell, “You’ve been BAMBOOZLED!” as they see Joey’s face appear. And that memory itself will be priceless.

A photo frame they can use to show off their own friends…or a photo of Pheobe’s dad.

A Central Perk lunch bag they can use to prevent anyone from stealing their Thanksgiving Leftovers Sandwich (and thus stop them from flying into a Red Ross–like rage).

A lightweight pullover that’ll ~be there~ for them whether they’re bingeing the entire series (again) or are “on a break,” but still want to show the world what they’d rather be doing.

A hand-poured candle made specifically to smell just like a coffee shop (not just coffee) so they can sit down and watch a few reruns while feeling like they’re sitting right in Central Perk with the gang.

A 2021 wall calendar with some of *THE* most iconic moments from the series they can relive all year long even if they don’t even have a ~pla~.

A monkey plush to remind them of Ross’s dear companion, Marcel — except he won’t poo in your shoe or abandon you for a flashy film career.

A skyline poster because their love for the show has reached new heights — and it’ll look lovely hanging in their room while they re-watch the show (over and over and over).

An ornament starring *the* Central Perk couch they’d expect to receive from the Holiday Armadillo (or Superman, you never know who is going to show up).

A Friends-inspired face mask that’ll give a whole new meaning to “I’ll be there for you.”

A set of colored pencils with some pretty hilarious color puns your friend won’t stop laughing at. I mean “Sandler Bing,” come on!

Or a canvas art piece featuring the couch and fountain from the opening credits. We all know that every true fan has been daydreaming about galavanting through that scene with their own colorful umbrellas for the last 25 years.

Monopoly: Friends The TV Series Edition because even if their job’s a joke and they’re broke, they can spend some time buying, selling, and scheming their way to winning this game (after a few hours, of course).

A personalized wine glass they can use when they cancel their Zoom date by saying, “Oh I wish I could, but I don’t want to” and then head home to drink some wine and binge all the Christmas episodes.

Friends-themed tarot cards for anyone who has some existential questions they’d like answered (don’t we all) but would much rather enjoy it through the lens of Phoebe or Joey than a more serious deck.

A doormat that’ll welcome everyone to your home — even your very own broom-wielding Mr. Heckles or a cackling Janice.

A poster covered in an array of iconic Friends moments that’ll leave them and their actual friends reminiscing as they watch season after season.

A phone case so amazing, that when everyone sees it, they’ll be more shocked than when Phoebe discovered that Monica and Chandler were together (“MY EYES!!).

A cassette tape enamel pin in honor of the super catchy Friends theme song that’ll still make every single one of us clap our hands (you know EXACTLY when) no matter where or when you hear it.

Or a chick and duck pin they won’t have to worry about getting stuck in a VCR or foosball table.

A quiz game that’ll probably be easier to win than a game of Bamboozled…if they’ve rewatched each episode at least 100 times, that is.

A sticker that’ll accurately depict their mood and Monica’s when someone makes a mess in her apartment (or their own, TBH).

A beanie for your Friends-loving friend who *also* happens to be that person who is always complaining they’re cold.

A keychain so cute that when your friend opens it they’ll scream “Oh. My. God.”

A Central Perk jersey they can throw on to keep them nice and comfortable while they spy on the Ugly Naked Guy who lives across the way.

A Joey Funko Pop of one of the best moments in television history where he puts on ALL of Chandler’s clothes…and also an accurate depiction of how I look when it’s -7 degrees outside.

A festive pullover that’ll make them want to grab the nearest guitar and perform, arguably, Phoebe’s second greatest hit (“Smelly Cat” will ALWAYS be number one).

A “you’re my lobster” sign to gift to your S.O. to show them that, just like Ross and Rachel, you’re in this thing for the long haul.

A T-shirt so they can replicate the iconic moment where Ross tries to prove he still fits into his fave shirt (in spite of the fact he got it when he was 15).

A holiday armadillo charm bangle because who can forget the amazing “friend of Santa” who will wish them a Merry Christmas every time they wear it.

Friends: The Complete Series on DVD, because they’re still in mourning that the show was removed from Netflix and have been too lazy to set up a new subscription for HBO Max.

And the coveted Geller Cup, perfect for any group of competitive pals who wants to really raise the stakes on their next “friendly” game of football.

Surprising your friends with the best gifts ever like: