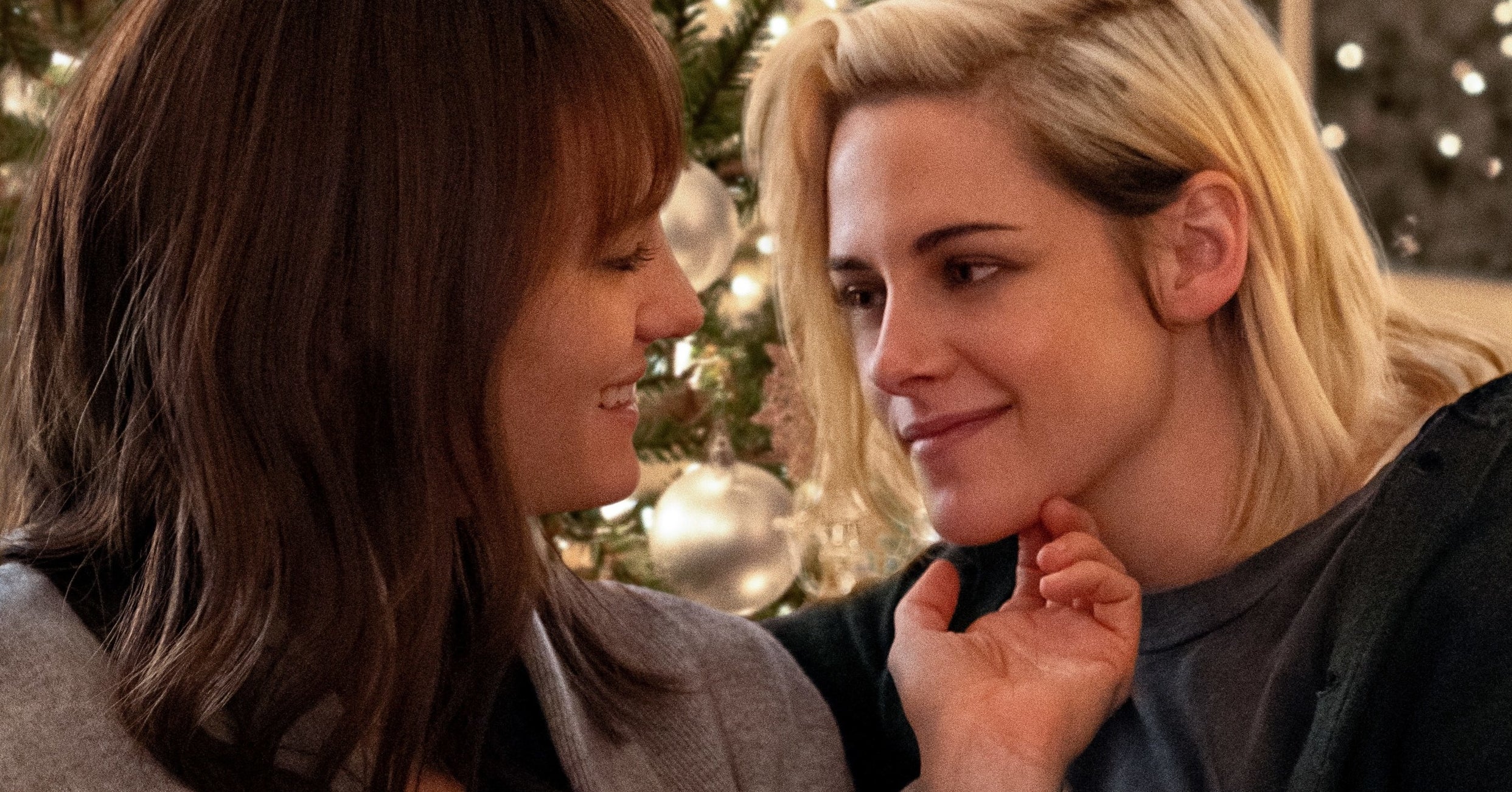 
When it was first announced some four billion pre-pandemic years ago that queer cinematic legends Clea DuVall and Kristen Stewart were teaming up for a lesbian Christmas rom-com, I didn’t dare believe our good fortune. DuVall, a cult icon since her turn as Natasha Lyonne’s greasy, androgynous crush in But I’m a Cheerleader 20 years ago, would be cowriting and directing, while Stewart, who’d I’d crushed on long before either of us came out, would star — an almost comical rarity in Hollywood, where the occasionally told lesbian story is much more likely to be a sexy male-directed thriller, or a bummer of a historical tragedy. Though we gays love a good Christmas comedy as much as if not even more so than our fellow straight people — my relationship to The Family Stone is practically a sacred one — we’ve never before had one to call our own.

Happiest Season, which drops today on Hulu, is the first-ever studio-backed holiday rom-com to center on a queer couple — a humbling, and frustrating, reminder that for all the progress made in mainstream LGBTQ representation over the last decade, queer characters onscreen still have plenty of uncharted territory left to explore. But even though the sparkly seasonal backdrop is excitingly new, Happiest Season’s queer couple — Kristen Stewart’s Abby and her girlfriend Harper, played by Mackenzie Davis — are dealing with a very old problem: Harper isn’t out to her hypercompetive Waspy family, which means when she takes Abby home for the holidays, Abby’s forced back into the closet.

Dan Levy, pitch perfect in the familiar role of the gay best friend, John, is aghast to hear that Abby has to pretend to be her partner’s “roommate.” (The trope is elevated to a delightful degree this time around, though, since our GBF isn’t around to help some straight person self-actualize — his friend is gay, too.) Abby tells John that she’s just trying to be there for Harper, but he’s not having it. “Have they ever met a lesbian?” he says.

It’s a funny line, especially when you consider the meta connotations. Stewart, post-Twilight, spent many years in the public eye openly holding hands with her live-in gal pals, all the while dressing and acting (and I say this with utmost respect and pride) like a big old lez. But until she made some grand, official pronouncement, Stewart’s straight audience, including the gossip blogs, would refuse to acknowledge the truth they saw before them. (Though I have to admit, if you’re forced to make some retrograde broadcast about your sexuality, announcing “I’m sooooo gay, dude” on SNL is a pretty good way to go.) For queer people, being “out” isn’t ever a one-and-done thing, but a lifelong series of strange and shifting negotiations.

DuVall has said that Harper’s story of struggling to come out is actually her own. “All I ever wanted was a holiday movie that represented my experience so I decided to make one,” she tweeted earlier this year. And Stewart told Heather Hogan at Autostraddle that she signed on for the project because it was her story too — being happily in love with a woman but not yet ready to share that love with others. Only in Stewart’s case, it wasn’t just a hesitation to share with friends and family; she wasn’t yet ready to be out as gay on the world’s stage.

Happiest Season, then, can be read as a love letter to both DuVall and Stewart’s former selves. The film wants us to be frustrated with Harper, who only tells Abby that she isn’t out to her family when they’re mere minutes from arriving at her parents’ place — after having first lied about it — but it does not, ultimately, condemn her. Even when Harper feeds her family some pity story about Abby needing to come home with her because she’s a lonely orphan; when she stays out late, without Abby, and with her straight friends and ex-boyfriend; when we learn a rather horrifying story about what Harper did to her ex-girlfriend Riley (the luminous Aubrey Plaza) when they were still in high school — we are still supposed to sympathize with and, in the end, forgive her.

I wanted so badly to love this movie, which has been warmly reviewed elsewhere: It’s the “lesbian romance [Christmas] deserves,” “a festive treat” that has “gift[ed] us the holiday smile we all deserve.” But I find the widespread insistence that Happiest Season is a charming, bubbly, feel-good romp a little jarring, when so much of it — the heart of it — is really about trauma and gay shame. Perhaps I wouldn’t feel this disoriented if the film hadn’t been so aggressively promoted as a fun gay love story, since, Plaza and Levy’s star turns aside, there’s not too much fun to be had here — and the kind of love we’re supposed to root for doesn’t look much like love to me.

There’s always some insidious stuff lurking just beneath the surface in most holiday rom-coms, which reliably transform grumpy outsiders into sudden true believers in the spirit of Christmas and the sanctity of the nuclear family. It’s not a genre where anybody should be expecting adroit political commentary. Truly, I didn’t need nor want some radical queer treatise with this movie — but I did want to swoon, to feel blissfully transported into a holiday wonderland where wacky hijinks ensue but everything is ultimately OK in the end. Instead, I was left reflecting upon how often queer people, traumatized themselves, can end up seriously hurting their partners. How the quest for assimilation into straight families and polite upper-middle-class society can limit and diminish us. (One of the reasons Harper doesn’t want to come out yet is because her dad, an aspiring mayor, is hoping to woo a big donor during the holiday season; his political affiliations are, somewhat bafflingly, kept a mystery.)

Which is all to say: I was bummed out! And that’s not how I want to feel after watching a rom-com, especially from queer makers and performers I love and respect.

There are a number of laughable moments, especially from the film’s breakout star, Mary Holland, DuVall’s cowriter, as the kooky neglected sister. But where there was com-, there was just not enough rom-. Happiest Season is guilty of that classic and incredibly annoying thing where you see all the relationship’s good times play out during an opening credit montage; besides a throwaway first scene involving Christmas-light gazing, any actually romantic moments are few and far between. It’s just really hard to tell, as Abby gets pushed further and further back into the closet, why she’d stick around for someone like Harper. (It doesn’t help that the gorgeous Mackenzie Davis has been outfitted in some drab brunette bangs, robbing us even of a “Well, at least she’s hot” excuse; I’m nursing a conspiracy theory that the studio insisted that the two lesbians needed to have different hair colors.)

At least we do get some charming tall femme–short andro butch representation; I’m more endeared to Kristen Stewart than ever. She’s perfectly convincing as a sweet, normal, down-home gay, so much so that you can almost forget she’s an international lesbian sex symbol. (Almost.)

Presumably in an attempt to feel timeless, the costuming choices are all sort of boring and/or strange. (Stewart’s holiday party getup, an unbuttoned white dress shirt with some black tie scarf thing draped over her bare chest, made me think she was looking very Shane today.) The setting, meanwhile, is an appropriately drool-worthy dream home that would fit right in in a Nancy Meyers movie. As Richard Lawson writes in Vanity Fair, “These trappings are obvious, materialist, certainly not tethered to the economic realities of most people’s everyday lives. But therein lies the fantasy of film — long granted to thousands of fictional straight couples, here being generously offered up to a couple of gays. (Well-heeled and white ones, yes, but gays nonetheless.) Happiest Season is not so much an aspirant to the queer canon as it is to the conventional holiday comedy genre, asserting a gay narrative into a rigorously straight tradition.”

Again — I am totally here for an ethically dubious conventional holiday comedy! Especially one that bucks the Hollywood assumption that gay people only hang out with straight people; if there’s another gay around the Main Gay in so many movies and TV shows, it’s almost always someone they’re sleeping with. I loved seeing an extended queer universe here, both in terms of actors — Victor Garber as aspirant mayor dad rounds out the impressive number of out cast members — and in terms of characters.

But even though the message of the film is ultimately a queer-positive one (Levy gives a lovely little monologue about the beauties and pains of coming to terms with yourself as a gay person), it’s still pretty rough to see (spoilers!!!) Harper get publicly outed by her sister, after which her dad disappears into the house and doesn’t speak to her for over a day. Harper tries to deny her gayness until the very end. Though she eventually embraces who she is, it’s quite a long, arduous journey — one that so many of us did go through, one that’s emotional and trying and important, but one that I don’t necessarily need to be reminded of in a supposedly lighthearted escapist rom-com.

Kevin Fallon at the Daily Beast warns that Happiest Season isn’t the queer-positive Christmas movie we’d all first envisioned when we heard the initial announcement more than a year ago. “But That’s OK!” he writes. “It’s still quite good, as far as this genre goes.” He mentions the burden placed on any major “firsts,” like 2018’s Love, Simon, the first big studio teen rom-com featuring a gay lead — produced by Marty Bowen and Isaac Klausner, who, incidentially, also made Happiest Season. Any groundbreaking “first” is “bound to spark some backlash and disappointment,” Fallon writes.

I’m not interested in contributing to any sort of backlash, but I can’t help but feel disappointed. If we’re going to have a politically out of touch, homonormative mainstream movie, I’d at least like to be able to turn my dumb brain off and be dazzled by the fantasy. Instead, Happiest Season is neither a provocative queer portrait nor a good-time blockbuster; it’s stuck in some sort of middling in-between. I know it can’t possibly be easy to balance the burden of representation with the desire to simply tell a fun story, but I do hope that, eventually, more of our fun stories are actually… fun.

I think the movie would have been salvaged for me if, in the end (MAJOR SPOILERS INCOMING), Abby told Harper that she loved and cared for her, but didn’t want to hitch her wagon to someone who still has a lot of work to do when it comes to processing and unpacking her internalized homophobia. And we still could have gotten the requisite happy ending that way: Harper forging new bonds with her family, and, hear me out, Abby running away with Riley. (Stewart and Plaza have such good chemistry! Plus, dating the ex-girlfriend of your ex-girlfriend is a lesbian classic.)

Instead, we get all the worst trappings of the genre: The nuclear family, once threatened by the outsider, is restored when the outsider is welcomed into the fold; she reifies her own commitment to its promises with a wedding ring. Yes, it’s not a very queer ending — but even more than that, it’s just not a satisifying ending, or one that feels earned based on what we know about these characters. I wanted more for Abby. And I want more for us, too. ●