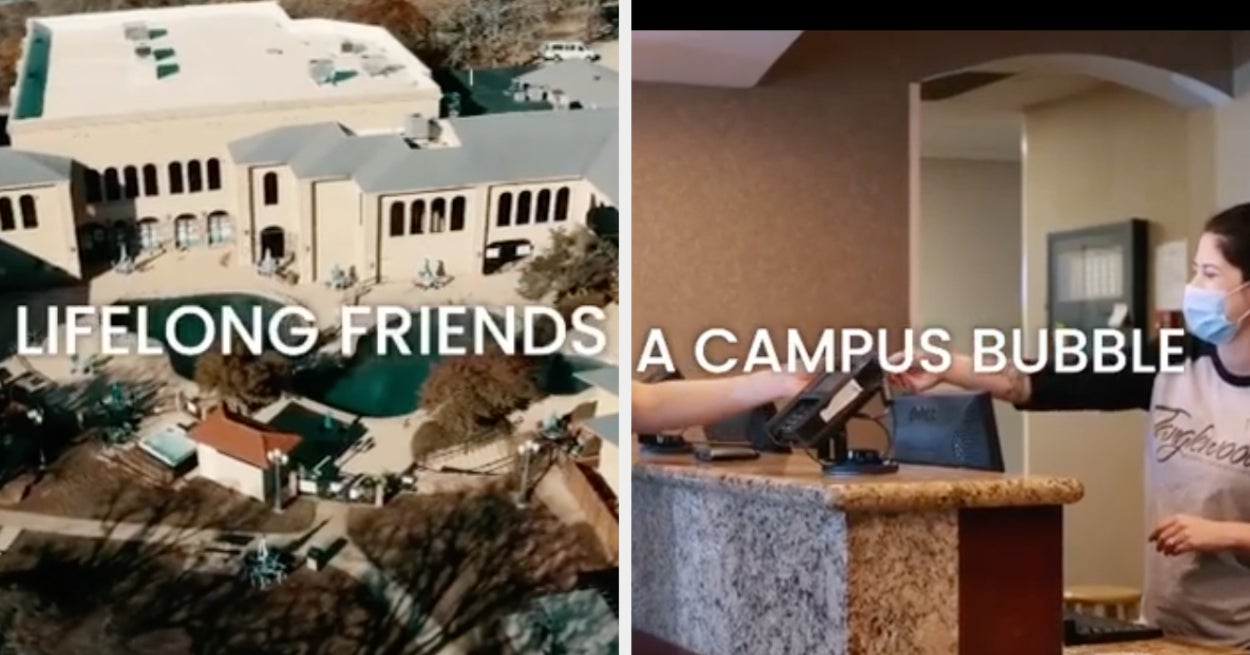 
A startup called “The U Experience” is trying to create “a safe, contained, and fun way for students to experience college during the COVID-19 pandemic.”

Its CEO and co-founder Lane Russell told BuzzFeed News that over the next week or so, he and his team will be hand-selecting 150 college students, who are currently enrolled in universities across the country, to live on a campus “bubble” sans masks or social distancing. He’s secured a secluded resort in Texas where students will be living starting in January for a semester — but they will not be able to leave.

The cost to attend the experimental campus during a pandemic? A $9,900 minimum housing and meal package.

Despite promises of a “once in a lifetime” opportunity, and longterm visions to do “social good” about making higher education more affordable, Russell’s idea has been mostly met with concern and grueling criticism online.

People are skeptical about keeping the premises virus-free, and a possible outbreak. Contrary to Russell’s social justice messages, they also feel that the program is mostly catered to those who have expendable income.

After the disaster of Fyre Festival, some are joking that an “impending documentary” is already in the works. However, Russell is unfazed by the comparisons, because, he said, he and his team have “spent the last four months perfecting all of [their] logistics and programming.”

“The big difference is that Fyre Fest ran this incredible marketing campaign and said ‘we’ll figure out the logistics later’,” he added. “We don’t have to worry about whether or not we can pull it off. We’ve already pulled it off.”

Russell is committed to following through with The U Experience semester that’s starting on January 28.

“The U Experience is trying to take what people see as a curse and make it into a blessing,” he told BuzzFeed News.

The company recently announced that Tanglewood Resort in Pottsboro, Texas, as agreed to be the site of their campus (a spokesperson for the hotel didn’t immediately return a request for comment). Two other hotels in Arkansas and Hawaii reportedly backed out of the deal in August. After reports the U Experience was considering hosting students in Hawaii, a woman started a Change.org petition against the idea. She collected more than 14,000 signatures.

Russell, though, said he felt there were “a lot of misconceptions about the program.”

“We’re taking the steps to not do anything risky … We prefer to be compared to the alternative, not the almighty,” he said. “What we’re doing is taking a lot of the superspreaders out of the population and letting them do what they want to do … We’re giving students a chance to rebuild their social support networks.”

Russell cited the NBA Disney World bubble as a successful model for containing the coronavirus in a single location. According to The U Experience website, students will be tested as soon as they arrive at the resort, and they “will receive frequent testing and daily temperature checks” throughout the semester. BuzzFeed News has reached out to the Texas Department of State Health Services for comment on the plans.

Along with mandatory quarantining for students, Russell said they’ve hired about 10 “youth experience staff” who will also be asked to stay on site the entire time. Tanglewood’s hotel staff are not required to quarantine with them, although designated hotel employees would be responsible for retrieving any outside supplies or groceries that students and “youth experience staff” may need. Russell said all communication and coordination between the two teams will not be done in-person.

There will also be “24-7 campus security,” Russell noted, adding that “the resort is extremely secluded, so leaving would be difficult. But enforcement ultimately comes down to trusting that students will be doing their part.

“It’s a social contract with these students. Students who disobey, or try to sneak off campus, unfortunately are going to be asked to leave the program,” he said. “They are responsible for the integrity of the bubble.”

According to its handbook, The U Experience will not be offering any refunds once a student has paid for a membership.

“As long as we can control in flow and out flow, we can be pretty confident that students won’t be exposed to the [outside] community or anything,” he said. “We’re offering 18 to 22-year-olds something they can’t get anywhere else. We think that’s something really special.”

Russell claims they’ve received over 1,500 applications. He and other co-founders, Adam Bragg and Chris Cook, will be hand-selecting the 150 students in the inaugural class. They’re looking for students “who are sociable people, leaders in their community, and social in the college space.”

One of the few students who has been accepted so far is 21-year-old Sumner Stroh, a senior at the University of Texas in Austin. That’s because Stroh is an influencer, and was targeted by The U Experience to help recruit and market their business.

Stroh, who has almost 150,000 followers on Instagram, told BuzzFeed News that depending on how many applicants she’s able to influence, she’ll be paying a reduced membership cost.

“They emailed me and asked if I could post their promo video in a story back in early August, I was kind of interested in it. They said they’d be down to have me, so I went ahead and applied and we discussed some terms. I got accepted.”

Stroh said she’s genuinely interested in the premise. She does not have many health or safety concerns, other than the idea of being stuck on the fake campus.

“I’ve been bored, to be completely honest. I’ve been sitting home with family. I was in need of that social life again,” she said. “Committing to quarantining the entire time will be difficult. I’m a model and influencer so sometimes I fly to LA. [The founders] said if I do go to LA I would have to quarantine for two weeks after. They’re more lenient with me.”

Russell’s ultimate goal is to turn the The U Experience into a venture that will make online learning more “attractive” and “affordable” for college students nationwide. He sees his startup as an opportunity for students to eventually save money on college costs.

Essentially, under normal circumstances, the U Experience would theoretically allow a student to both enroll in cheaper, online college courses while getting to have a traditional in-person college experience.

“In the broad scheme of things we really do see this as analogous towards the Tesla Roadster business model. The Tesla Roadster is a super premium car and very few people can afford that, but it really gave Tesla a chance to make the idea of an electric vehicle more attractive … Eventually, they were able to make a consumer product that was more accessible to more people,” Russell said.

He said he and his founders do not plan to turn a profit in this first run.

“Student debt crisis is a big problem and we can’t fix it overnight. But we’re just doing our part and see if there’s anything we can do to do some social good.”

On social media — on their own branded social media page — the public does not see the big-picture motive as doing “social good.” In fact, some think the venture is exploiting a vulnerable time and will not live up to the hype.

“This is a funky little cash grab for rich folks who really hate having to keep others safe. This is a setup for complete disaster,” a commenter wrote; “How you gonna get a college experience with 150 people,” another asked rhetorically.

Some are spamming their page with Fyre Festival comparisons and “Fyre University” jokes.

For Stroh, she’s not worried about the potential for U Experience to fail. She seems genuinely trusting of the founders’ ability to deliver. But, more importantly, she’s a brand ambassador.

“I don’t get Fyre Fest vibes at all — I’m excited for it. I saw [the] Fyre Fest [documentaries] and I’m not sure why they’re saying that. Everything looks planned out; everything looks great.”