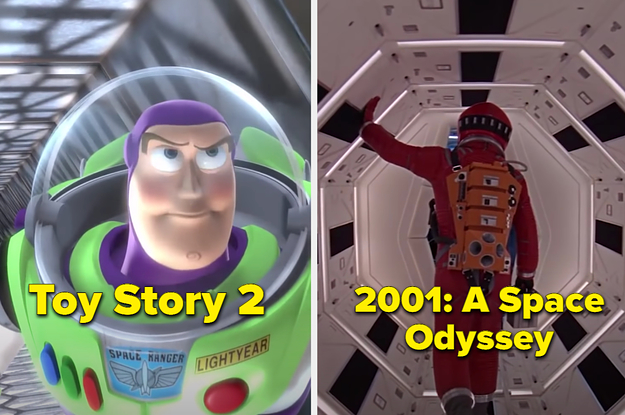 Spoiler Alert! This list does reveal some plot lines from the films included, so please proceed with caution!

Toy Story seemed to reference the iconic booby-trapped boulder from Raiders of the Lost Ark by having Buzz dodge an out of control globe.

In Finding Nemo the villainous shark Bruce, chases Nemo and Dory into a shipwreck and threatens them through the broken hull, much like Jack Nicholson’s famous “Here’s Johnny!” scene in The Shining.

Toy Story 2 seemed to draw inspiration from Alfred Hitchcock’s 1958 thriller Vertigo when Woody dreams that Andy no longer wishes to play with him and drops him in the bin. This scene is almost shot for shot the same as when John “Scottie” Ferguson the main character in Vertigo, dreams of falling to his death.

This scene in The Incredibles where we are informed that superheroes have gone out of fashion, looks very similar to the scene in Citizen Kane where Charles Kane is announced dead.

In Toy Story 2 the hexagonal tunnel Buzz finds himself in when trying to escape from Zurg seems to subtly reference the iconic space ship design of 2001: A Space Odyssey.

Toy Story 2 referenced the most iconic and quoted scene from Star Wars: The Empire Strikes Back. In this not-so-subtle hint to the Sci-fi classic, Zurg reveals that he is actually Buzz’s father, just as Darth Vader did to Luke.

Finding Nemo seemed to reference Alfred Hithcock’s feathered thriller The Birds, in this scene where Nemo and Dory find themselves being chased by an angry flock of seagulls – much like the birds that plague the people of Bodega Bay.

This scene in Toy Story 3 when Woody falls out of a tree and his cord narrowly stops him from hitting the ground, looks very similar to the scene in Mission Impossible when Tom Cruise nearly gets detected by lasers after the supporting rope loosens, causing him to fall.

Cars seemed to reference the famous flying bike scene from E.T. the Extra-Terrestrial where the kids are flying through the air on their bicycles, with Mater flying past the moon, creating a very similar shot.

This scene from Up where Charles Muntz reveals a giant bird skeleton looks a lot like this scene from the original King Kong where the monster is displayed on a theatre stage.

In another more direct homage, WALL-E seemed to reference the famous sentient computer HAL 9000 from 2001: A Space Odyssey by giving the AI computer Auto, a very similar look and personality to the onboard computer from the sci-fi classic.

And finally, Inside Out seemed to reference Back to the Future when Bing Bong sacrifices himself to save Joy. We see Bing Bong stay behind in the Memory Dump so that Joy can escape. He slowly starts to disappear, first looking at his hand exactly like Marty when he alters the past.