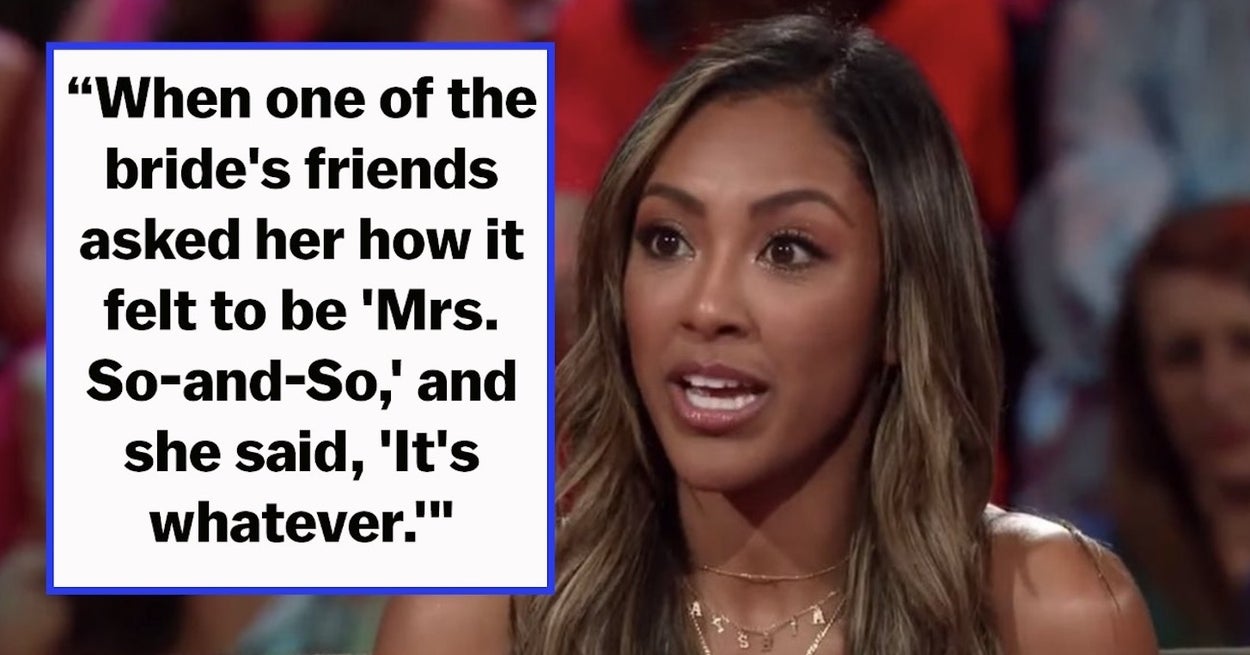 Over time, wedding professionals sometimes develop a kind of sixth sense for which marriages will last, and which will end up, well, “unhappily ever after.”

“When one of the bride’s friends asked her how it felt to be ‘Mrs. So-and-So,’ and she said, ‘It’s whatever.'”

“When the other woman the groom had knocked up showed up at the reception 8 1/2 months pregnant, hammered drunk, and wearing a wedding gown and veil.”

“At a wedding I bartended seven years ago, the best man made a joke about the size of the groom’s penis during his speech — and one of the male wedding guests yelled out, ‘She’s missing my extra four inches!'”

“Turns out, the guy who yelled out was the bride’s ex-boyfriend. The groomsmen had to hold the groom back.”

“I remember one wedding I bartended where the groom got so drunk that he messed up his speech and had to be carried to his room to sleep it off. The bride had to do the first dance with her dad!”

“I helped cater a wedding once and was cutting the cake to serve guests when the groom asked me if he could lick the icing off my fingers. And his new bride was standing right beside him!”

“I picked my jaw up from the floor and hid in the kitchen for the rest of the wedding.”

“I knew it wasn’t going to work when the bridesmaid’s speech included the phrase, ‘Poke a hole in the condom.'”

“During the first dance, the bride and groom kept as far apart as possible while holding each other’s shoulders — the mood was like an eighth grade dance.”

“I was the audio guy at a wedding where the groom passed out not once, but twice during the ceremony.”

“We got him up the first time with smelling salts, then after the vows, he went down again! So we just sat him down on the stairs to finish the ceremony. The poor bride had the worst look on her face, and six months later, it was over.”

“I was in the band at a wedding where the mother of the groom seemed to have inappropriate affection towards her son — they were walking around holding hands and acting like they were at prom!”

“Maybe I was reading it wrong, but it was weird. It’s been years, and I still think about that gig all the time.”

“When I caught the bride making out with one of her bridesmaids.”

“I’m a wedding DJ, and had gotten the gig through the bride’s younger sister, who was a friend of mine. Well, I ran into her later and asked how the couple was doing, and she said, ‘Not great.’ Turns out, the day after the wedding, the groom took all the checks and cash they’d been gifted, and went on a shopping spree at Best Buy, Guitar Center, Dick’s Sporting Goods, and REI — he blew through about $5,000 in five hours!”

“I don’t remember exactly what all he got, but the most ludicrous thing that stuck with me was two iPod touches — one for music, and one for audiobooks. And the only thing he got for his new wife was a backpack from REI. And she was not into the outdoors.”

“I don’t work in the wedding industry, but I knew my sister’s wedding wasn’t going to last when I found out she was going to be his sixth wife.”

“When the bride punched out her sister-in-law at the wedding reception, then they spent the rest of the night hurling insults at each other.”

“I was the wedding singer for a wedding where the bride was literally the only one on the dance floor. Finally, one of her bridesmaids and a few other people joined her so she wouldn’t be alone, but the husband couldn’t be bothered…”

“I kept seeing him walk by, chat with various people, and at one point he even had a drill in his hand to go fix something — basically doing anything but dance with this poor woman! Finally, she saw him talking to someone near the dance floor, and went over to get his attention, and he completely blew her off — he didn’t even stop his sentence, he just shoved her hand away.”

“I worked a wedding where they used stacks of books as centerpieces at the tables. The books were copies of Sun Tzu’s Art of War.”

“The bride asked me to put a few of their photos up right away for Facebook, and I got a call at 1 a.m. from the furious groom, who said that I ‘made him look bad’ by posting pictures where his hair looked sweaty. At his outdoor wedding. On July 4. At noon. In Louisiana.”

“I photographed a wedding and was almost done with the groom and groomsmen photos when the bride came over and started screaming, asking why she wasn’t in any of the photos. I explained that these shots were only for the guys, but she demanded to be in their shots, too! And then she proceeded to take my camera and throw it on the ground, shattering the lens!”

“The groom just walked away.”

And finally, a tale that is such a doozy we need a new word for doozy:

“I went to deliver a wedding cake, and the groom’s boyfriend showed up to confess to the bride that he’d been with the groom longer than she had, and that they were in love!”