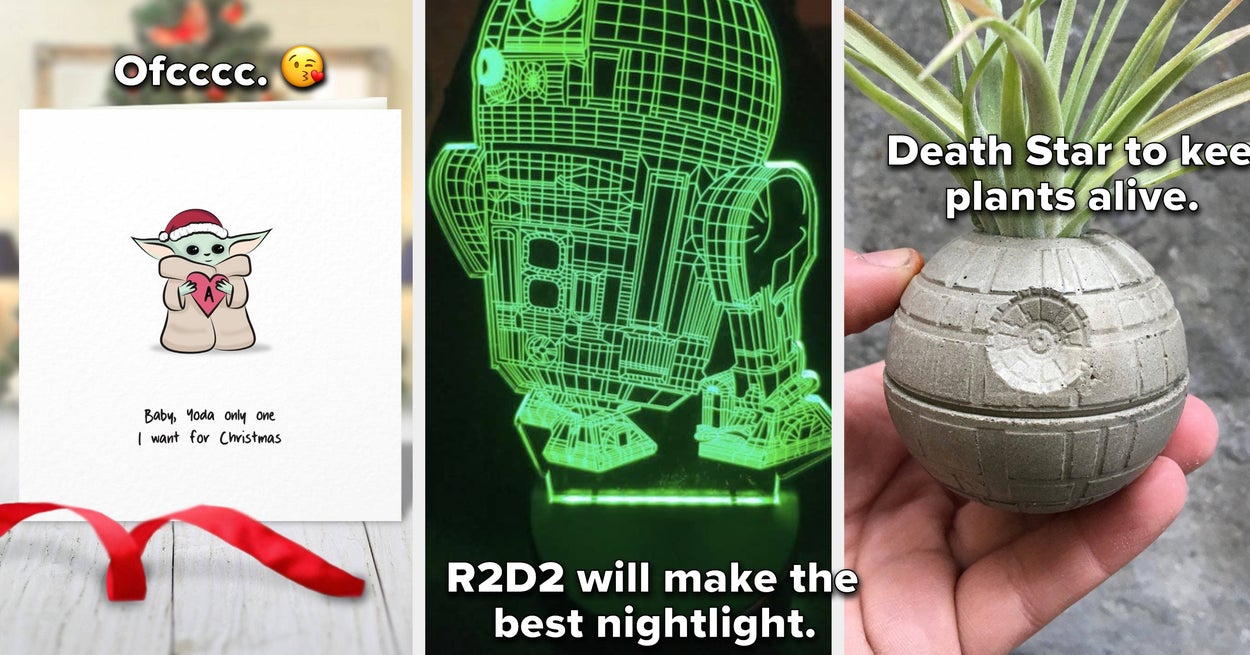 Hey! While we’re doing our best to make sure the products we feature will arrive in time for Christmas, shipping times are especially tricky this year and can vary depending on where you live, which product you purchase, and more. Shop early and be sure to double check the retailers’ websites for shipping information to ensure that your gift will arrive in time for the 25th!

A super sweet Christmas card that’ll def tell your babe just how much more you love them than the famously adorable infant Jedi. It’s customizable so you can have Baby Yoda hold your love’s initial.

A 3D Star Wars and Star Trek LED lamp made with a light guide glass plate that’ll make it look like real starships are floating through your room (OK, your personal galaxy) at night.

A Millennium Falcon keychain bottle opener so the Force will conveniently be with anyone trying to crack open a cold one anywhere they are.

A Darth Vader blender that’ll whip up smoothies and shakes in a flash. It features a single button so it’ll be super easy to use and the top turns into a travel-size bottle so when the blending is done, the drinking can begin, STAT.

A Darth Vadar apron so Halloween and cosplay conferences won’t be the only time a Star Wars fan gets to be their favorite villain. The neck portion and waist strings are connected in a single loop similar to a drawstring, making it adjustable so no Force will be needed to make this fit.

A ceramic mug for folks who love themselves some Baby Yoda AND live for a good mug of hot tea.

Handmade
personalized leather money clips that’ll make anyone who loves Star Wars (and you!) feel extra special since you can select their favorite character, then get their name engraved or a quote or BOTH. If you happen to know their fave quote from the franchise, then the clip’ll be a super hit.

A T-shirt for the fan whose *favorite* Disney princess will actually factually ALWAYS be Princess Leia.

A light saber chopsticks set to actually light up and defend anyone’s belly from hunger with the bravery of the Jedi. May the ~forks~ totally NOT be with the receiver of this gift as long as they have these cool, glowy things to eat with. The set will also come with a Millennial Falcon beer bottle opener!

A bamboo utensil set with some of the most iconic Star Wars characters engraved in each one!

A light saber umbrella to join the Resistance and defend themselves when raindrops threaten to destroy their outfit and hair.

A three-part Death Star spice grinder that I’m sure the recipient will truly appreciate and love to death. Reviewers noted that it grinds oregano, basil, and ~other~ grindable things quite well!

A 2-quart slow cooker to make yummy appetizers and dips that the galactic allies in their house won’t be able to stop munching on any more than they can stop the suns from setting. Word to Shmi Skywalker.

A Millennium Falcon waffle-maker that’ll shoot out waffles that no one will be able to resist — with the speed of the fastest ship in the galaxy, of course. The appliance has five temperature settings and a dual-indicator to show when it’s ready to cook and ready to eat.

Yoda pins to attach to backpacks, jackets, or any other spot that could use some good Yoda vibes. And yessss, there’s an option for stans who actually *aren’t* obsessed with Baby Yoda and prefer him in his wiser years.

A customizable handmade clock created with a refurbished vinyl record — and yes, Yoda’s on this because there’ll be no one better to reveal what time it is than with the OG Jedi Master who’s seen “the future, the past, and old friends long gone.”

A Darth Vader sweater because even the Sith aren’t exempt from the Christmas spirit or the cold winters on earth.

Star Wars cards to treat your loved ones to an extra thoughtful holiday greeting this year. The inside reads “Merry Force be with you.” These will be great for the fans you’re planning to gift with cash or gift cards.

A talking Darth Vader light Clapper so a person can clap to turn off a lamp in a room with the Force instead of crawling out of that cozy, warm spot on the couch or bed. When they clap to turn it on, the Sith will say, “The Force is strong with this one.” When it turns off, he’ll utter, “You underestimate the power of the Dark Side.”

A set of pencils with the most iconic quotes from the franchise.

A Death Star cheese board set that’ll give the Star Wars lover who’s also ~really~ into cheese (intersections, people!) one gift that hits two of their favorite things. The set features a crumbly cheese cleaver, a pronged knife, a hard cheese knife/spreader, and a planer inside of a wooden case. Its top doubles as a cheese board with a laser-engraved Death Star design.

An insulated Thermos Wookiee lunch bag so kiddos who love Chewbacca can take a cuddly reminder of him to school with the food they need to power through whatever mission their day might bring.

A Wookiee T-shirt to not underestimate the power of the messy hair day. The honorable Chewbacca is loyal, a beast with a bowcaster, and look, he helped free the friggin’ galaxy. Messy hair is obviously an asset. It means you’re getting stuff done. Right?! Obviously!

Reviews have been edited for length and/or clarity.