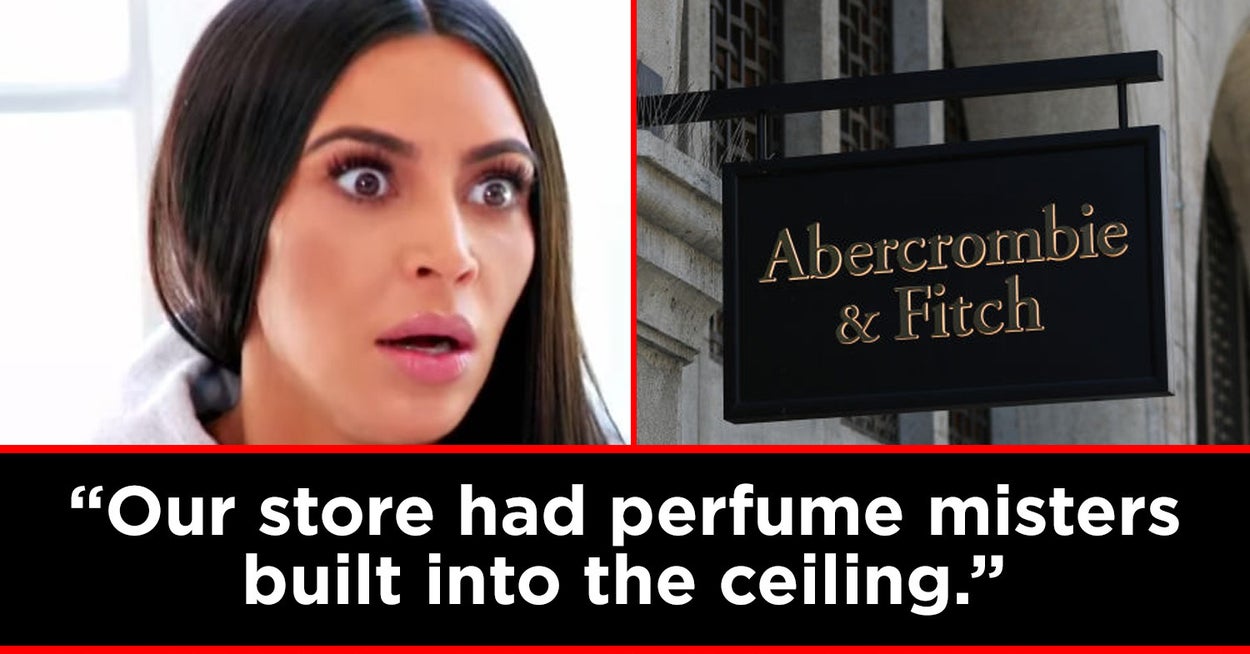 Recently, we asked the former Abercrombie & Fitch employees of the BuzzFeed Community what it was like working at the heavily perfumed store back in the early 2000s. Here are some of the most eye-opening submissions we received…

“I worked as a ‘model’ — what they called their sales associates — folding clothes at the front of the store and it was my job to greet people who walked in. The only greeting I was allowed to use was ‘Hey, how’s it goin’?’ because I guess it seemed more ‘cool and laid back’ or whatever. I literally got yelled at by my manager once for going off-script and saying, ‘Hey, welcome to Abercrombie’ instead.”

“We had a poster in the back with pictures of what was acceptable to wear. One time, I wore the wrong flip-flops and was told to go home or work the register and stay behind the counter barefoot.”

“There was someone assigned during every shift to spritz each individual piece of clothing with the latest cologne once EVERY. 30. MINUTES.”

“During orientation, we were told to not interact with customers. Our jobs were to ‘fold shirts and look good in the clothes.'”

“Men had to wear their jeans one waist size bigger so you could see their underwear line and the logo. Our shirts also had to be one size smaller so it was tight in the chest/arms so you could see our muscles. Oh, and we had to wear our belts extra long to hang in front like a penis.”

“I’m naturally blonde and showed up to work with the ‘natural makeup’ they required. However, I had black mascara on. I was then told by my manager: ‘You have blonde hair, so you would never have naturally black eyelashes. Go to the bathroom and pick your mascara off.’ Needless to say, I didn’t stay at the job very long after that.”

“The guys had to be clean shaven. If you came in with any facial hair, there was a rusty old razor in the restroom you could use to shave with, otherwise you wouldn’t be allowed to work.”

“We could never wear sale items on the floor and most of my income was constantly spent on buying new clothes.”

“You weren’t allowed to have more than one ear piercing and could only wear nude nail polish.”

“No one was supposed to use the words ‘attractive’ or ‘good-looking’ to describe the ideal Abercrombie look (even though that’s clearly what they were going for). Instead, managers would say, ‘We want our employees to have a nice “natural look.”‘”

“It was always freezing cold, so I would walk in and put on one of the sweatshirts from the shelves and wear it throughout my entire shift and then put it back after. It wasn’t worth spending the money!”

“We were only allowed to wear white, gray, and navy, and at Christmastime, it was a luxury to wear red plaid.”

“Our store literally had perfume misters built into the ceiling that were set to go off on a timer. Every time I had to fold clothes near them, I’d walk away feeling nauseous and dizzy.”

“Managers had to give the people they ‘scouted’ a password to be able to access the online application so that only people who were personally invited could apply for a job.”

“For ‘legal reasons,’ you couldn’t wear black. Very dark blue that appears black, but no black.”

“You’d get 50% off your first purchase (to allow you to buy the clothes you were going to work in) and then 30% off all other purchases. I recall a number of employees getting hired, buying a crazy amount of gift cards (and getting 30% off) and then quitting. The turnover was wild.”

“I remember a girl once came up to me and asked if we were hiring. We were, but somehow a manager overheard and told me in the headset to tell her that we weren’t. The manager said she didn’t have ‘the look.'”

“I cut my hair into a short afro, and the next day when I came into work with it, my manager immediately told me to go home because my hair no longer fit the approved styles in the company look book. They showed me the approved styles — all of which I obviously couldn’t replicate with a one-inch curly afro. It was very clear that when my hair was chemically straightened it was approved, but that when I allowed my hair to grow naturally, it became a problem. As a young Black woman, it definitely hurt to think my natural look wasn’t ‘acceptable.’ They essentially refused to schedule me until I made my hair look white again, so I just never showed up again.”