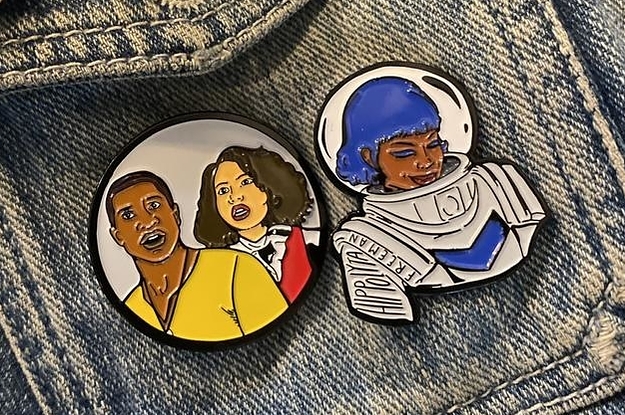 
Hey! While we’re doing our best to make sure the products we feature will arrive in time for Christmas, shipping times are especially tricky this year and can vary depending on where you live, which product you purchase, and more. Shop early and be sure to double check the retailers’ websites for shipping information to ensure that your gift will arrive in time for the 25th!

A graphic tee of all the major players in the series — alter egos excluded.

A pair of cigarette pants for that Letitia “Leti” Lewis style that served as a form of rebellion against societal norms for women during that time — BIG MOOD.

An enamel pin gift set to put on the denim jacket they wear every day with every outfit, because just as denim is life, so is their love for Lovecraft Country. It can also adorn their favorite backpack on their next adventure.

Add this Ruby Baptiste pin for the fans who have a ~strange case~ of Ruby fever.

An Orinthia Blue shirt inspired by the comic Diana “Dee” Freeman created in the show. Fun fact: All of Dee’s art in the series was created by Eisner-winning illustrator Afua Richardson.

A journal that’s modeled after the Green Book — the real-life safe traveler’s guide similar to Uncle George’s publication in the show — that let Black people know where it was safe to travel and where it wasn’t.

An HBO Max subscription so they can rewatch Lovecraft Country any time they want. Or, find a new series to watch while waiting for a season two. They can set up their own profile so no one messes with their watch flow, and all their shows can be right where they left them the next time they sit down to watch.

A Funko Pop! Cthulhu action figure for anyone with a good memory and a keen eye. It only appeared once in Lovecraft Country during Atticus’ dream in episode one, but it’s still a cute collectible, especially for true HP Lovecraft fans who have read his essay The Call of Cthulhu where the tentacled creature was first introduced.

An Atticus-inspired bath and body set that he definitely could’ve used more than once in the series. The bloody mess of episode one, the murky waters of episode four — it’s a wonder there weren’t more shower scenes. I felt like I needed a bath after episode five.

Lovecraft Country by Matt Ruff — the dark fantasy novel that inspired the HBO series. If they love the series, they may also enjoy taking a glance at the book, comparing the book to the show.

A vintage Chicago American Giants cap similar to the one Dee wore in the series. It represented the professional baseball team in the Negro league in Chicago that ended in 1956.

A Josephine Baker magnet because episode seven rekindled their love and appreciation for the 1920s icon. Now they can be inspired every time they grab a glass of milk.

A vinyl sticker that’s just begging to be stuck on the back of their laptop. It could serve as a conversation starter when they’re working in the park or their local coffee shop.

A handmade wooden mug made with a stainless steel interior so they can use it for both hot and cold drinks. When it comes to watching my fave shows, my special mug filled with an ice cold spicy Sprite is a must.

A pair of Leti stud earrings for when they’re feeling sassy enough to tag along on an adventure that just might lead them to their next love affair 😏.

When they open their Lovecraft Country gift:

Intrigued? Sign up for HBO Max for $14.99 a month and access countless TV shows and movies. Not sold yet? Sign up right now for a week (for new subscribers only).