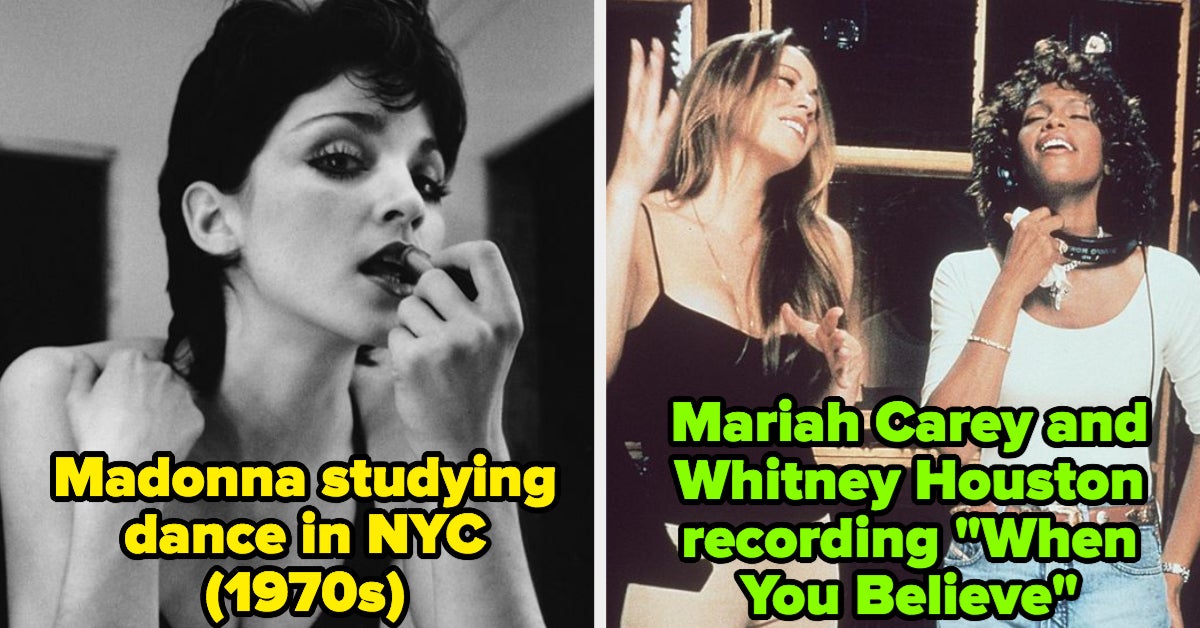 Madonna applying lipstick in a mirror when she was studying dance in New York City in the late 1970s.

A 20-year-old Cher checking her makeup in a recording studio in Los Angeles in the mid-1960s.

Celine Dion rocking patchwork jeans and pretending she’s talking to someone on the phone in 1990.

Tina Turner looking at a variety of wigs on the street in 1985.

Queen Latifah striking a pose on the set of her “Fly Girl” music video in 1991.

Joan Jett playing electric guitar on her bed in her childhood bedroom in Los Angeles, circa 1977.

Alicia Keys posing with a very tiny and very cute white piano in the park in the early 2000s.

Diana Ross getting down in the most joyous way at Studio 54 in 1979.

Stevie Nicks posing on top of a car in-between recording sessions with Fleetwood Mac in 1975.

Dolly Parton petting a horse at her afterparty at Studio 54 in the late 1970s.

Amy Winehouse posing in a laundromat in the beginning of her career in 2003.

Tina Turner and Cher happily embracing in all of their ’80s glory at an MTV Awards party.

Lady Gaga performing with Lady Starlight at a club in New York City before she was famous in 2007.

Jennifer Lopez hanging out with her pupper in front of her house in 1992 before she made it big.

Aretha Franklin taking a hamburger break at the piano while recording an album in 1969.

Barbra Streisand, Adele, and Shirley Bassey at the Governors Ball Oscars party in 2013 after Adele won for Best Original Song.

The Spice Girls sipping some tea together at a French café in the mid-1990s.

Gwen Stefani and Eve on the set of their music video, “Let Me Blow Ya Mind,” at a club in Los Angeles.

Mariah Carey and Whitney Houston in the studio recording “When You Believe” back in 1998.

Yoko Ono sitting in the middle of her living room in her New York City apartment, circa 1973.

Barbra Streisand posing with a skull and crossbones flag in Central Park in the early 1960s.

Taylor Swift performing at one of her first shows 14 years ago in Nashville, Tennessee.

A very young (and very happy) Janet Jackson posing in her childhood home in 1977.

Lauryn Hill behind the scenes of her music video, “Everything Is Everything,” in the late 1990s.

Chilli, T-Boz, and Left Eye from TLC posing together in a dressing room in the early 1990s.

Rihanna singing at the Teen People Listening Lounge showcase (along with Jay-Z, Ne-Yo, and Teairra Marí) in 2005.

Judy Garland and Liza Minnelli happily singing songs at the piano in London in the mid-1960s.

And Britney Spears rocking some tiny glasses during rehearsals for the VMAs in 1999.