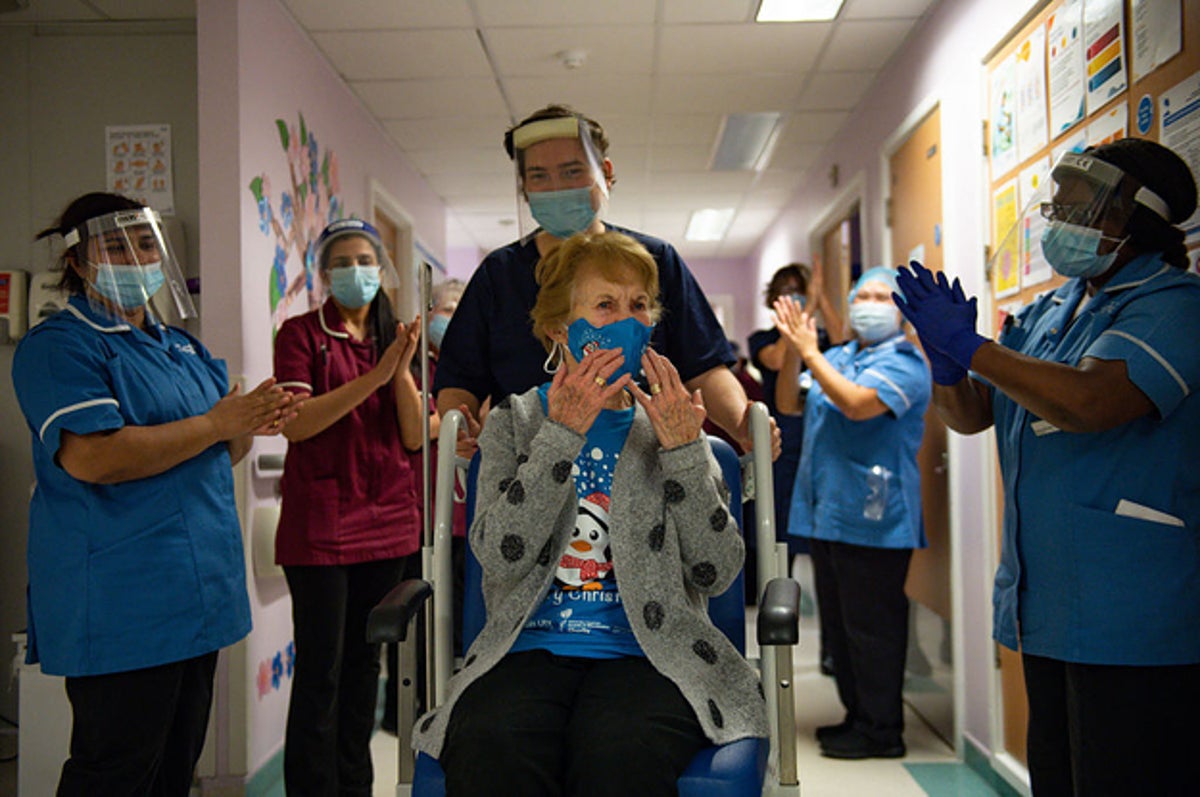 
Margaret Keenan, a 90-year old woman from Northern Ireland, on Tuesday became the first person to receive the Pfizer/BioNTech vaccine outside of clinical trials, marking the start of the UK’s mass vaccination programme as announced last week.

Keenan who turns 91 next week said, “I feel so privileged to be the first person vaccinated against COVID-19, it’s the best early birthday present I could wish for because it means I can finally look forward to spending time with my family and friends in the New Year after being on my own for most of the year.”

“I can’t thank May and the NHS staff enough who have looked after me tremendously, and my advice to anyone offered the vaccine is to take it – if I can have it at 90 then you can have it too!”

Shortly after the vaccine was administered to Keenan, a second patient, 81-year-old William Shakespeare from Coventry also received his dosage.

Recipients of the vaccine are expected to receive a booster jab in 21 days to ensure their protection against the virus, which has killed 1.54 million people globally.

Last month Pfizer announced promising early results from its coronavirus vaccine trial which suggested the drug was safe and 95% effective at blocking COVID-19. The company said no serious side effects have been observed.

The results from the trial, which has recruited 43,000 participants, were based on 170 people who got infected with the coronavirus. Of them, 8 were in the half of study participants who received the vaccine and the other 162 had received placebo shots, pointing to a high statistical significance of the shots’ effectiveness.

With more than 1.7 million confirmed cases of the virus, the roll out of the vaccine has begun with 70 hospitals and comes just over a week after Britain became the first western country to approve the drug.

Appearing on national television, Britain’s health minister Matt Hancock was tearful as he acknowledged the journey to reach the moment

“It’s just been such a tough year for so many people and there’s William Shakespeare putting it so simply for everybody that we can get on with our lives,” Hancock told hosts on Good Morning Britain.

The US is expected to authorize the Pfizer vaccine this week.

On Tuesday, the FDA released its own analysis of Pfizer’s clinical trial data, showing that the vaccine was effective regardless of participant race, weight, or age. On Thursday, the FDA’s advisory committee will meet to discuss the data and could vote to grant emergency authorization to the vaccine in the US.