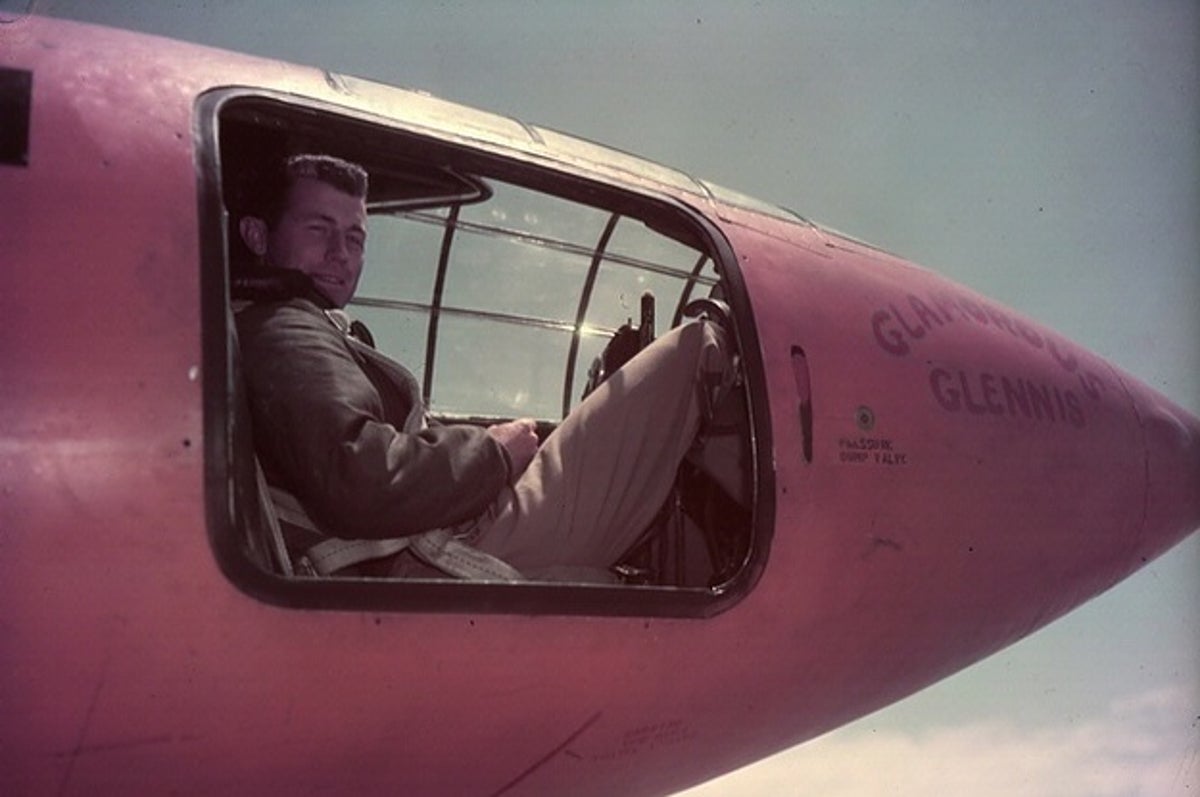 Chuck Yeager, the first pilot to travel faster than the speed of sound, has died, according to his wife, who announced his death on his official Twitter account Monday night. He was 97.

His wife, Victoria Yeager, did not give a cause of death, but said he died just before 9 p.m. ET, adding that his “strength, adventure, & patriotism will be remembered forever.”

US Air Force Brigadier Gen. Charles “Chuck” Yeager’s most famous flight happened Oct. 14, 1947, in an experimental Bell X-1 rocket plane dropped from the belly of a B-29 bomber. He was 24 years old and nursing two broken ribs from a horse riding accident.

“That was really who he was, a tremendous pilot who could fly anything,” aviation curator Bob van der Linden of the Smithsonian’s Air and Space Museum in Washington D.C. told BuzzFeed News. “There was not an ounce of pretense in Chuck Yeager.”

Yeager took to Twitter in 2010, sparring with people decades younger on points of history and aviation (dissing the United Kingdom, in one row), and marking memorable moments in his storied life.

Born in Myra, West Virginia, Yeager was a fighter pilot “ace” in World War II, eventually downing 13 German planes. After being shot down in 1944, he resumed his fighter pilot duty after escaping through Spain with the help of the French Resistance. He famously shot down a German jet plane with his P-51 propeller-driven fighter in 1945.

After the war, Yeager flew maintenance missions, his skills sending him to test-pilot school at what is now Edwards Air Force Base in California. There he was assigned to test fly the experimental Bell X-1 rocket plane, Glamorous Glennis (named after his wife), shaped like a .45 caliber bullet, through the sound barrier.

On the Oct. 14 flight, Yeager reached the speed of Mach 1.06 (where Mach 1.0 is the speed of sound), or around 700 miles-per-hour. His 20-second sojourn triggered a thunderous clap that rang out over the Mojave Desert, the first sonic boom in the history of human aviation.

“I thought I was seeing things! We were flying supersonic!” Yeager wrote in his autobiography. “It was as smooth as a baby’s bottom: Grandma could be sitting up there sipping lemonade.”

Yeager was “master of the sky,” wrote Tom Wolfe in The Right Stuff, the acclaimed 1979 recounting of this feat and NASA’s early astronaut program. “His was a king’s solitude, unique and inviolate, above the dome of the world.”

Yeager would later break more speed records, test fly a captured Russian jet during the Korean War, and command squadrons of fighters and bombers during the Vietnam War, including a stint from 1971 to 1973 as a US advisor to Pakistan during its war with India. Enlisted as a mechanic in the US Air Force in 1941, he retired as a Brigadier General in 1975. “All that I am … I owe to the Air Force,” he said at his retirement ceremony.

The 1983 movie version of The Right Stuff made Yeager the peerless, fearless icon of the Space Age. The book and movie celebrated Yeager’s low-key West Virginian drawl as the calm, reassuring voice of today’s airline pilots, homage paid to his preternatural flying skill.

“You do have to understand that those test pilots were overwhelmingly men who had flown combat missions and seen people die,” said van der Linden. “They were not thrill seekers, but they were ruthlessly practical about the risks they took, and eliminating them.” Yeager, he added, was always “open and thoughtful” when speaking about these risks.