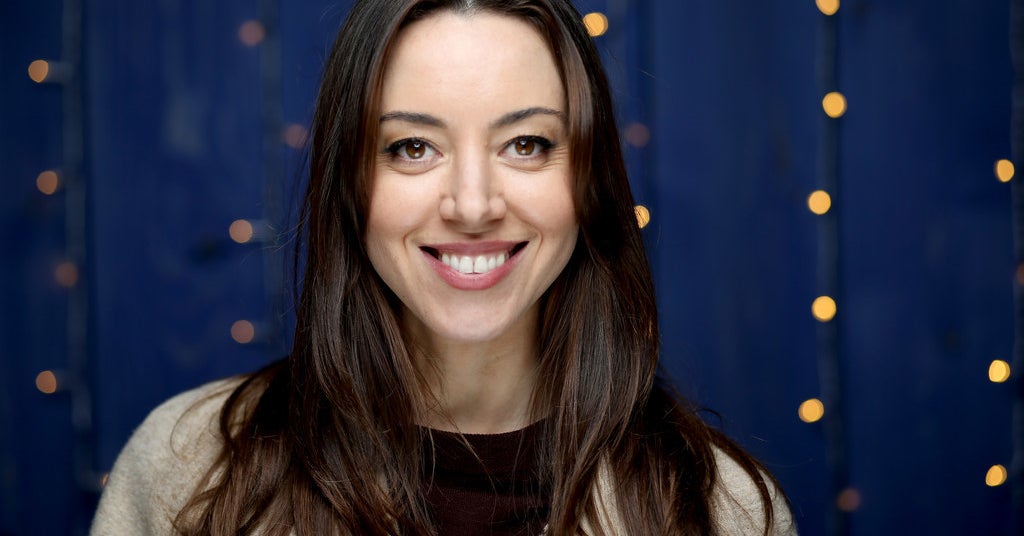 
Aubrey Plaza has one warning for her new film Black Bear: “Don’t watch it alone, because it will give you nightmares,” she says over Zoom, while discussing the spine-tingling drama. She’s not kidding. The Lawrence Michael Levine-directed movie, which co-stars Christopher Abbott, Sarah Gadon, Paola Lázaro, and Grantham Coleman, and is an uncomfortable close-up of what it takes to create art and sustain a romantic relationship — and it’s so full of twists and turns, you’re left with mental whiplash. You really have to see it to get it because there aren’t any spoilers to be found here.

Instead, read on for what Aubrey loves most about working on indie films, the possibility of a Parks & Rec movie, and the biggest misconception about her.

Sitting on the dock and shooting that weird sequence where I’m just sitting on a towel looking out into the lake and mist and I’m all alone. There was something so incredible about that setting. The camera was rolling but all I had to do was meditate on nature. It was a really beautiful day and moment for me because I was in such a beautiful place and I really got to be present and absorb it.

What town was it filmed in?

It’s in the Adirondacks near Lake Placid.

Was it your first time in the Adirondacks?

Yeah. I’ve been to upstate, NY but I’ve never been up that far.

What was your favorite thing about being there?

Just the beauty of the lake and swimming in the lake, because I didn’t grow up swimming in lakes. I grew up in Delaware, which is coastal and flanked by the bay. So I grew up in saltwater. I’m a saltwater sea hag. I had to adjust to be a freshwater hag for the shoot. I learned a lot about lake living and I was liking it. I’d do it again.

Have you ever gone on a trip like in the film, where nothing went to plan?

Oh yes. Oh yes. In fact, the trip that I went on directly after shooting Black Bear, I made the mistake of thinking, “You know what? I’m going to shoot this movie. It’s going to be very hard. But I’m going to go on vacation. Won’t that be a nice way for me to decompress.” Wrong. Lesson learned.

What scene was the hardest emotionally to do?

The scene in the second half when I’m playing an actress that’s performing in a film, in the movie, and I have this climactic breakdown scene within the scene. There were multiple levels to that, which were really complicated. It was a lot to deal with at once. Also, we were shooting very fast. We didn’t have a lot of time so it was a very tense, intense moment for me. It was do or die. It had to happen. I had to jump.

As far as all of the characters you’ve played, where does this one rank in terms of being closest to what your personality is offscreen?

What character that you’ve played before is least like you?

I would say Lenore in Dirty Grandpa is really not like me at all. I would never go to spring break in Florida and try to have sex with a very old man. I’m not going to do that. It’s not interesting to me.

What do you most love about working on indie movies?

I love the collaboration on it. I love working with the crew. I love working on an intimate set where everyone is friends and everyone knows each other and we’re all treated with respect. Everyone is in it together. There’s something really rewarding about that. It’s always the people that I love more than anything.

Will there be a Parks & Rec movie at some point?

Which of your Parks & Rec costars do you talk to the most these days?

Amy Poehler, Rashida Jones, and Kathryn Hahn. I mean honestly I talk to a lot of them — we all talk to each other all the time — but I would say Amy, Rashida, and Kathryn and I have been on this quarantine ladies text chain where we’ve been commiserating and helping each other through these strange times. It’s been really nice to have them.

When was the last time all of you got together as a group?

We were together on Galentine’s Day last year. We had one socially-distanced outdoor hang a couple weeks ago, which was really cool. Hopefully this pandemic will pass by and we can all get in the hot tub again.

What was the last great song you heard?

Dolly Parton’s Christmas album [A Holly Dolly Christmas]. I was just listening to that this morning. Dolly is the best.

What would you say is your favorite holiday movie?

Is Halloween your favorite holiday?

What kinds of things are on your Instagram Explore Page?

That’s a good question. I don’t know. I’m not so good at navigating The Gram. I use it to tell people about projects that I have coming up and things that are important, but I try not to scroll through things too much. I think I have noticed that there’s a lot of Kristen Stewart on there recently, I’m assuming because of Happiest Season — oh, and Criminal Minds. Criminal Minds‘ fan account pops up because of my glorious unsung arc as Cat Adams, which will live in Criminal Minds history forever. People on The Gram love Spencer and Cat’s cat and mouse game.

Do you read your DMs?

Yeah, I read them. I think I have a setting where I can only get DMs from people that I know. I don’t read DMs all the time though. A lot of times people are like “I messaged you on the thing.”

Have you ever missed an important DM?

I think so but I can’t remember who that was.

What was your biggest takeaway about influencer culture from working on Ingrid Goes West?

Just how fake Instagram is. It’s so disconcerting to see behind those perfect pictures, when you know that’s just not reality. I did a lot of research on influencers for that film and, if you really, really pay attention, you start to notice “This was clearly not a spontaneous picture. This was something that was fully calculated.” So the depths that people go to, to pretend that they’re having a fabulous life, is really creepy.

What do you think is the biggest misconception about you?

People think I don’t care about anything but the truth is I care too much #real.