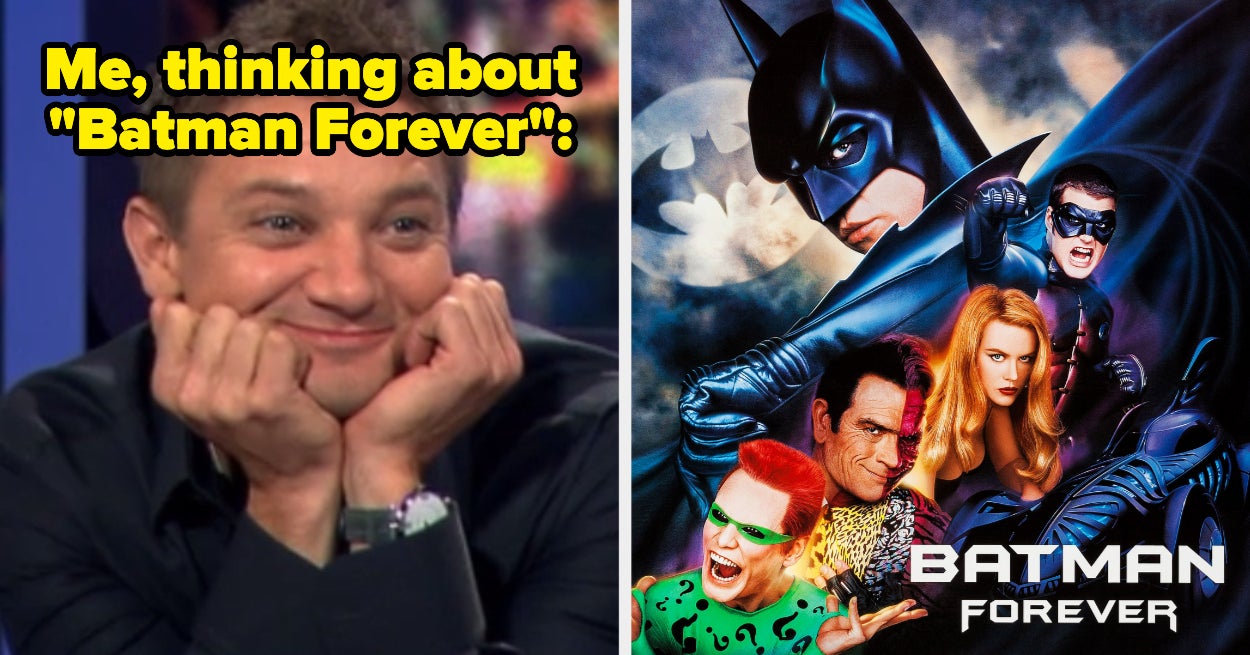 HELLO READERS! It’s everyone’s favorite(?) BuzzFeed writer — old Allie Bad-Taste — back again with yet another entry into my very unsanctioned series: “This Movie Was Fun, Actually, And Ya Know What? We Shouldn’t Only Praise Movies That We’re Explicitly Told Are ‘Good’ By Other People, But Ones That We Personally Find Enjoyable For Whatever Reason. Holy Heck, Let Me Live. Life Is Short, And I…What’s That? I’m Running Out Of Characters? Okay, Let Me Just Sto—”

And this week, well…I guess you can just call me “The unofficial third member of the Street Profits*” because I WANT THE SMOKE — from Batman stans, at least.

Okay…here it is…I’m going to say it: I love Batman Forever (1995). Unironically, unabashedly, unforgivingly. I love it. I think it’s GREAT. I firmly believe it’s the second best live-action Batman movie ever made*, but it’s EASILY the most fun one. So, strap in as I aggressively defend this 25-year-old movie, unprompted, for an obnoxious amount of time:

So hear me out: Tim Burton’s Batman movies are considered “pioneering,” everyone loves Chris Nolan’s take, and (people with taste already know) Batman & Robin is a camp classic…but Batman Forever gets no love, even though it’s FANTASTIC. To start, we have Val Kilmer replacing Michael Keaton as Bruce Wayne, and he brings an absolutely CHAOTIC, aggressively ’90s energy to the character:

Admittedly, he makes for a very goofy Batman — but he’s an EXCELLENT Bruce Wayne. The hair, the turtlenecks, the eyebrows! *Chef’s kiss.*

Then, we have Nicole Kidman (with the best hair I’ve ever seen in a movie in my life) starring alongside him as too-cool-for-you criminal psychologist, Dr. Chase Meridian:

The two have fantastic, off-the-charts chemistry, and it’s really fun to watch them play off of each other. Also, like, yeah…I’ll say it: It’s truly a casting decision made in bisexual heaven.

Just look at this bi-lighting, will you?! They knew EXACTLY what they were doing!!!

MOVING! ON! This movie also introduces us to Dick Grayson — aka, Robin — played to perfection by teen-angst-in-human-form-who-would-100%-be-a-TikTok-star-if-this-movie-had-come-out-today, Chris O’Donnell.

He’s scrappy and silly and the perfect foil to Val Kilmer’s Bruce Wayne, and he delivers every line with the vigor it deserves. He knows EXACTLY what movie he’s in, and I love him for it!

Now, you KNOW we can’t talk about a Batman movie without talking about the villains, and this movie has two of the most ridiculous, most camp-tastic villains working together: Two-Face and the Riddler.

Tommy Lee Jones is UNHINGED as Two-Face — yet is also, somehow, a mood. Like, a whole-ass mood. Pure vibes. Me on a Tuesday:

Seeing such a serious, beloved thespian as a whacky district-attorney-turned-two-faced-mess was a DELIGHT, and he gives it 110% for absolutely NO reason. He went SO HARD in this, and he did that for US.

And, OF COURSE, Jim Carrey is exceptional as the Riddler. He’s at the peak of his ’90s comedy domination — with this film’s release falling smack-dab in the middle of Dumb and Dumber and Ace Ventura: When Nature Calls — and he’s truly at the top of his manic, improv-genius game.

Also, FUN FACT: Jim Carrey in this movie (specifically as pre-Riddler Edward Nygma) was one of my first real celebrity crushes as a child! I feel like this fun fact explains a lot about who I am as a person, and why I’m teetering on the brink of being fully deranged every single day!

As with literally any movie he’s in, he ONLY adds. He’s a privilege to watch perform. Every scene he’s in is a treat, and I CAN and WILL sanction his buffoonery!

Also — despite that behind-the-scenes drama — Jim Carrey and Tommy Lee Jones were PURE ART together. They’re funny as heck and their combating energies, somehow, work.

This scene? Perfection, no notes:

But it wasn’t JUST those two bringing the laughs — honestly, the entire movie was chock-full of great comedic moments and super-fun editing choices.

Also…Drew Barrymore is in this? For even LESS time than she’s in Scream??? I didn’t know that was possible?! But I’m not going to complain!!!

And I haven’t even MENTIONED the fact that this movie gifted us with a drunk-karaoke staple on its soundtrack — Seal’s “Kiss from a Rose.” This movie just gives and gives and asks for NOTHING in return.

So, uh, yeah. Batman Forever is incredible. I love it. It’s just…good? No, I will not be taking further questions at this time, and — in the future — maybe consider putting some respect on this movie’s name, please!

Join me next time for yet another aggressive yet completely unprompted movie defense! Same bat-writer, same bat-BuzzFeed page.