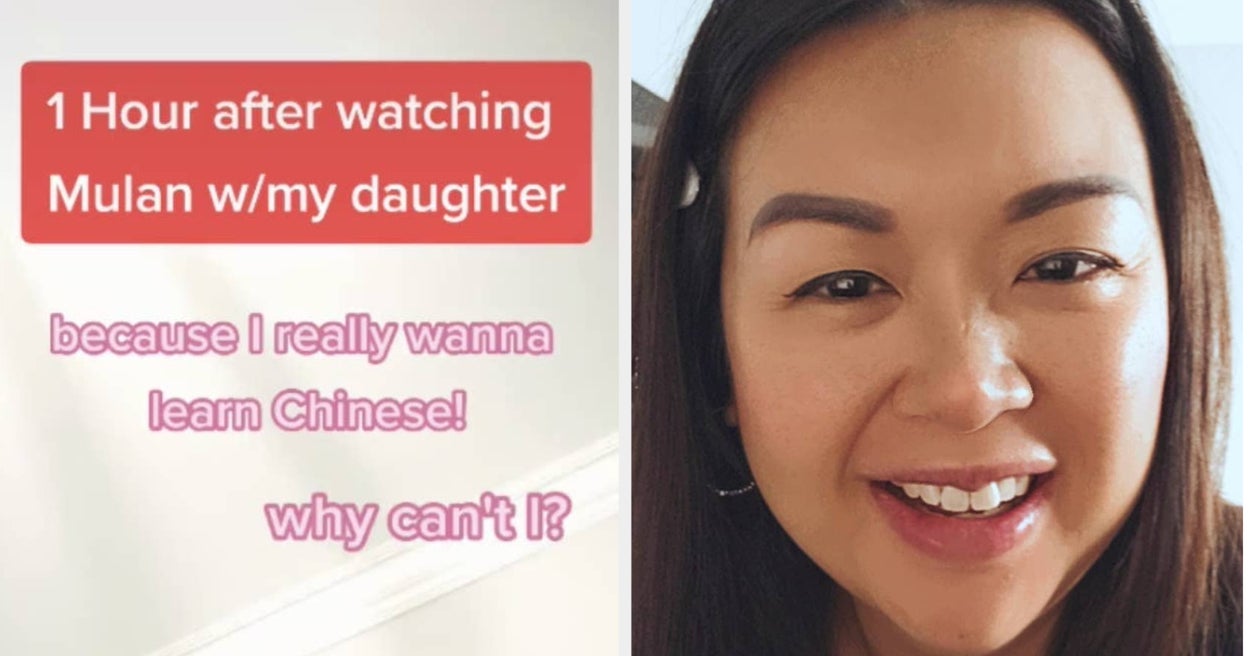 The following video of a little girl hysterically crying has gone super viral on TikTok:

In the video — which has over 10 millions views — the mom asks her daughter why she’s so upset and, through tears, the little girl explains that it is because she can’t speak Chinese.

People of all different cultures started immediately relating to the video and were super impressed with how wise the girl was for understanding the value of her heritage at such a young age:

It also opened up a conversation about cultural assimilation:

BuzzFeed reached out to the Canada-based mom, Leanne Lee. She and her husband Benjamin have two children together — 5-year-old Mikayla (who is the girl in the video) and 2-year-old Theodore.

Before we get into the TikTok, it’s important to understand Leanne’s upbringing. Leanne told BuzzFeed that the Canadian city she grew up in did not have many Asians and that the few Chinese friends she had all spoke English. “Although my first language was Cantonese, I didn’t have many chances to utilize or practice it conversationally. I learned English and French at school, Mandarin on the weekends, and Cantonese at home. But, all I wanted to do was speak English because that’s what my friends spoke,” she said, adding, “I was also teased for not ‘looking’ like the ‘rest of them.'”

Because Leanne leaned so heavily on the English language, she eventually lost fluency in Chinese language. “My parents recognized that I was quite the independent girl, not really looking for approval from them. So, though they tried to get me to speak Chinese at home and practice my Mandarin, I rejected the languages and conversationally only used English. They always spoke to me in Cantonese — I just responded back in English,” she explained.

Now Leanne only speaks English. After she had Mikayla, she didn’t ask her parents — whose native tongue is Cantonese — to teach her daughter the language. “My parents do not live in Canada and only visit in small spurts, so I figured Mikayla wouldn’t retain as much,” she explained.

And, it wasn’t until recently, when Leanne and Mikayla watched Mulan together, that Mikayla expressed an interest in learning Chinese. “I would pause [the movie] every so often to make sure she understood what was happening, and to make sure she understood the impact of Mulan and the history behind her story. I explained to her that she and Mulan were very similar — that they were both Chinese, they were both first born, and they were both brave, honest, and loyal,” said Leanne, adding. “The moments leading up to that 51-second video also need to be understood. It was bedtime and we were already ‘fighting’ to get her to bed. Suddenly, Mikayla launched into this whole speech about wanting to speak Chinese like her grandparents. I was completely taken aback and stunned. I immediately grabbed my phone to start filming because I thought it was a hilarious, sweet, and touching moment.”

“Cultural assimilation is such an important topic because a lot of non-white kids growing up in the ’80s and ’90s probably felt the same way I did, but no one ever talked about it. This concept was never verbalized to me as a kid, and I’m only learning about it as I grow up and fully embrace my heritage. Obviously, as a 38-year-old woman, I’ve become much more confident in who I am as a Chinese Canadian. However, knowing what my husband and I know now as parents, we can try to make it a little bit easier on our kids in terms of cultivating a sense of pride in their own culture and heritage, but also acknowledging that they’re Canadian born, too,” she said.

Leanne added, “I think what non-POC don’t understand is the shame that one can feel, or the shame that one can be subjected to, if that person does not speak their ‘native’ language. In my opinion, native tongue doesn’t always necessarily mean your heritage, or even the language you were exposed to at an early age. I would argue that native tongue means the language that you most identified with internally and externally. To me, it’s what you’re most comfortable speaking and what you use most of the time. That would be English for me. My biggest struggle, growing up as a second-generation POC, is that I felt I was never ‘Canadian’ enough, but I also never ‘Chinese’ enough. I’d have pressure from both sides and I felt as though I almost had to ‘pick’ a side. The non-POC kids would tease me for being Chinese and the fluent, Chinese-speaking relatives would shame me for not being able to speak the language.”

Mikayla is now enrolled in Chinese school — and Leanne is relearning Mandarin as well. “I hope my TikTok stirs up and encourages conversations within multicultural households. I hope that young, second-generation immigrants understand that, although language can be a powerful tool to opening doors to cultural and heritage connection, it doesn’t necessarily define your identity,” she said.

Leanne added, “One of the largest struggles second-generation immigrants have is knowing where the balance is and finding solace in accepting that it’s OK to identify as fully Chinese, but also fully Canadian, despite only knowing one of those languages. I want my daughter to understand that though she may not speak Chinese — despite her saying, ‘Why am I Chinese if I don’t speak Chinese?’ — it doesn’t make her any less Chinese.”