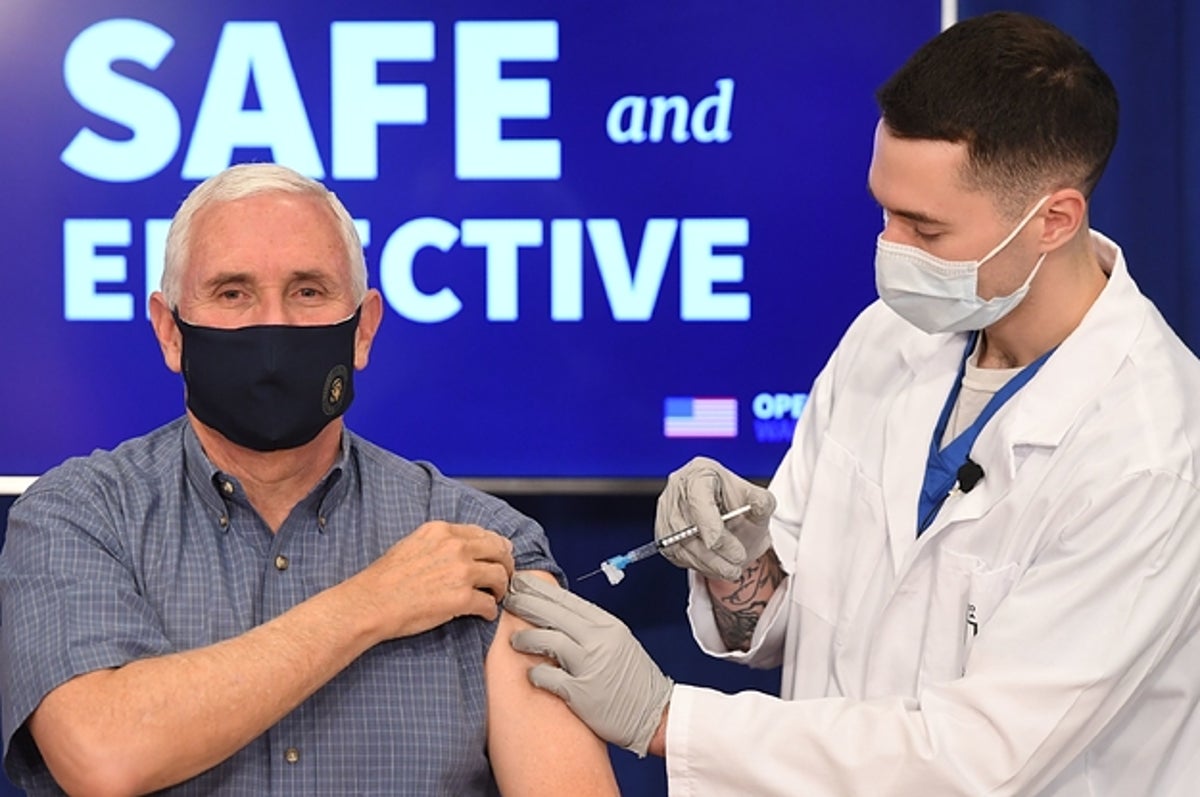 After months of leading the White House coronavirus task force, overseeing an ineffectual response to the pandemic that has killed more than 310,000 people to date, Vice President Mike Pence became among the first people in the nation to receive the first Pfizer vaccine dose on Friday morning.

Along with his wife, Karen Pence, and Surgeon General Jerome Adams, Pence was vaccinated in an event broadcast on live TV as part of the Trump administration’s mixed effort to instill public confidence in the vaccine.

He is the first top Trump administration official to receive the vaccine.

“Karen and I are more than happy to step forward before this week was up, to take the safe and effective coronavirus vaccine that we have secured and produced for the American people,” he said after receiving the first shot in his left arm, in a speech applauding the nationwide mobilization to deliver and administer the vaccine.

“From early on, President Trump gave the White House coronavirus task force one mission and that was to save lives,” he continued. “And in the midst of one of the most challenging years in the life of this nation, I truly do believe that despite the heartbreak and hardship that we have endured as a nation that we have done just that.”

The Pences join thousands of healthcare workers to receive the first doses of the vaccine this week as the pandemic reaches staggering new heights. On Wednesday, Johns Hopkins University reported more than 247,000 new COVID cases in the country and more than 3,600 deaths, the highest single-day count to date.

The vice president himself has dismissed concerns about the severity of the pandemic. In June, as case counts increased in parts of the country, Pence wrote an op-ed insisting there was no second wave of the virus in the US and praising Trump’s leadership for the “great progress” the administration has made.

“The media has tried to scare the American people every step of the way, and these grim predictions of a second wave are no different,” he wrote. “The truth is, whatever the media says, our whole-of-America approach has been a success.”

The administration also passed on Pfizer’s offer to secure more doses of the vaccine back in the summer, the New York Times reported.

Pence has publicly displayed indifference to safety measures as well. In October, after several of his close aides tested positive for the coronavirus, he continued to show up at election campaign events, flouting the recommendations of public health experts.

Days before he received the vaccine, Pence also reportedly hosted a holiday party at his house, where guests were photographed without masks on and spent time in an outdoor area.

Now in December, with the country well into its third and most brutal wave of the pandemic, the administration is struggling to deliver a unified front on encouraging Americans to get the vaccine despite securing priority vaccinations for its staffers.

The White House has said that Trump, who was hospitalized in October after testing positive for the coronavirus, will not get vaccinated yet. An aide to Melania Trump also told a reporter that whether or not the first lady gets the vaccine “is not something she’ll likely share.”

The Biden transition team, however, has said that President-elect Joe Biden and Vice President–elect Kamala Harris will be vaccinated next week, also in public.