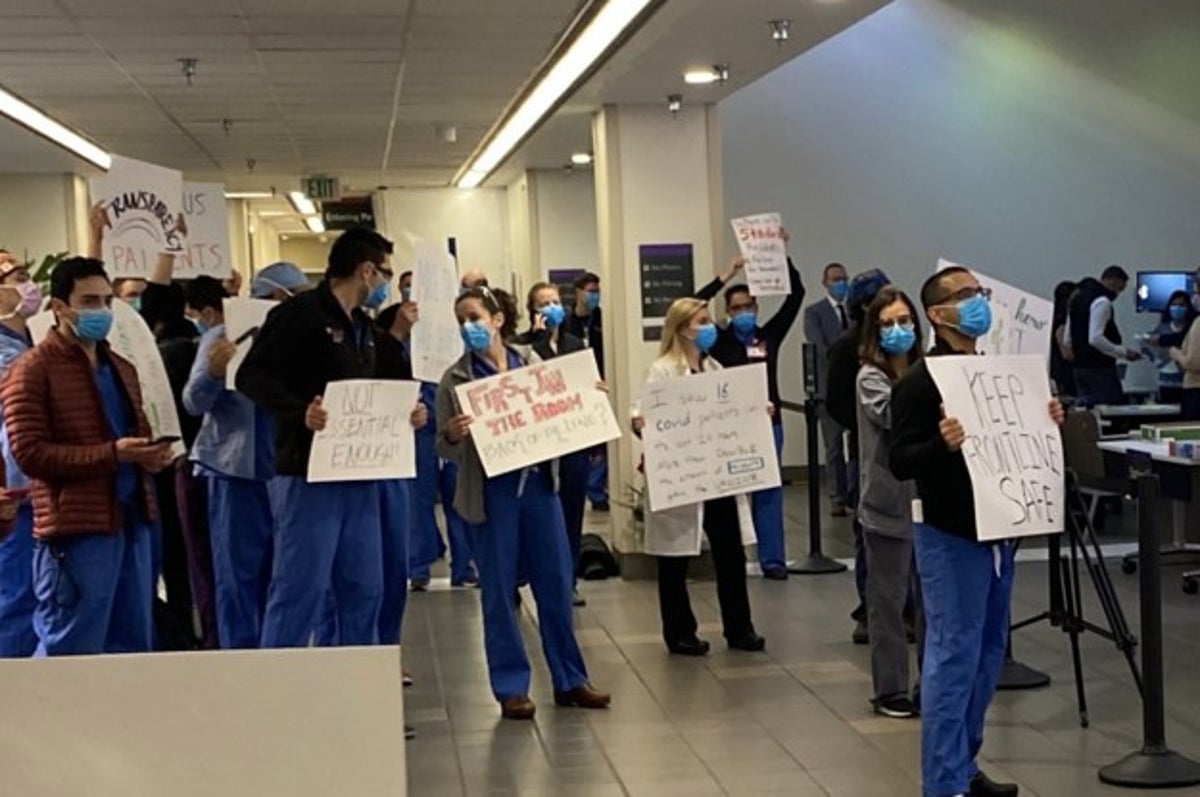 Doctors at Stanford Medical Center in California on Friday protested against the university’s plan for distributing the first batch of coronavirus vaccines after only seven of the hospital’s 1,300 resident physicians were set to receive one of 5,000 doses.

In a statement to BuzzFeed News, Stanford Medicine officials acknowledged they made a mistake in their plan and apologized to frontline staff for the mistake.

“We take complete responsibility for the errors in the execution of our vaccine distribution plan,” they said. “Our intent was to develop an ethical and equitable process for our distribution of the vaccine. We apologize to our entire community, including our residents, fellows, and other frontline care providers, who have performed heroically during our pandemic response.”

They said they would change their plans for distribution but did not specify how.

Inside the hospital, doctors and staff in scrubs held signs that read “First in the room, back of the line,” “Vaccinate Healthcare Heroes,” and “7 out of 1349.”

“We’re constantly asked to volunteer our holiday time, our time off, and I understand there’s a pandemic, but we also want to know that the institution that we’re working for has our backs,” Primbas said. “We’re asked to give more, take more risks, but we weren’t considered a priority.”

Primbas said the problem didn’t seem only restricted to residents, but to nurses, respiratory specialists, and custodial staff in the emergency room and ICU who have said they too were not given priority during the first wave of vaccinations.

“A lot of them seemed to have been left out of the first wave of COVID vaccinations in favor of people that don’t have direct COVID contact,” she said.

Some hospital administrators addressed the demonstrating doctors Friday, telling them priority was set by an algorithm that considered risk factors, such as age and health risks, into the priority list.

But Primbas and other doctors have said administrators were made aware of problems with the algorithm earlier this week, yet decided to move forward with the plan anyway.

Primbas said staff were notified who would be prioritized yesterday afternoon, prompting residents to quickly organize the protest.

People started to become aware of problems with the distribution when doctors and other staff — like doctors working from home or radiologists who were not interacting with patients — started to come forward themselves, saying they had been set to receive a vaccine.

Dr. Mary Hawn, chair of the department of surgery, reportedly emailed her department saying she was “disturbed and puzzled” that many of the people slated to be given the vaccine this week were not on the frontline, ProPublica reported. She suggested that those not on the frontline would instead show up to their appointment with a resident to get the dose instead.

Department heads and other top officials at the hospital have been supportive during what has been a difficult time, Primbas said, but hospital administrators appeared to have significantly missed the mark in their plan for the vaccine, forcing staff to speak out Friday.

“I don’t want to point fingers or blame, but it did give us pause and caused us to advocate for having representatives from different clinical care units represented at whatever decision-making table exists,” she said. “I think the institution does value us, but I think they really did not think this one through.”

The turmoil also illustrates the difficult decisions multiple institutions will face in prioritizing who gets access to the vaccine in the coming months.

With limited access to doses, hospitals and other institutions are left making decisions on whether to prioritize those at higher risk of health complications if infected with COVID-19, or those with the most constant, direct exposure to the virus.

“It’s not an enviable job to try to figure out how to distribute that,” Primbas said. “But I do think in this case it is sort of clear that someone who is intubating a COVID patient should be prioritized over someone who is not even working with patients.”