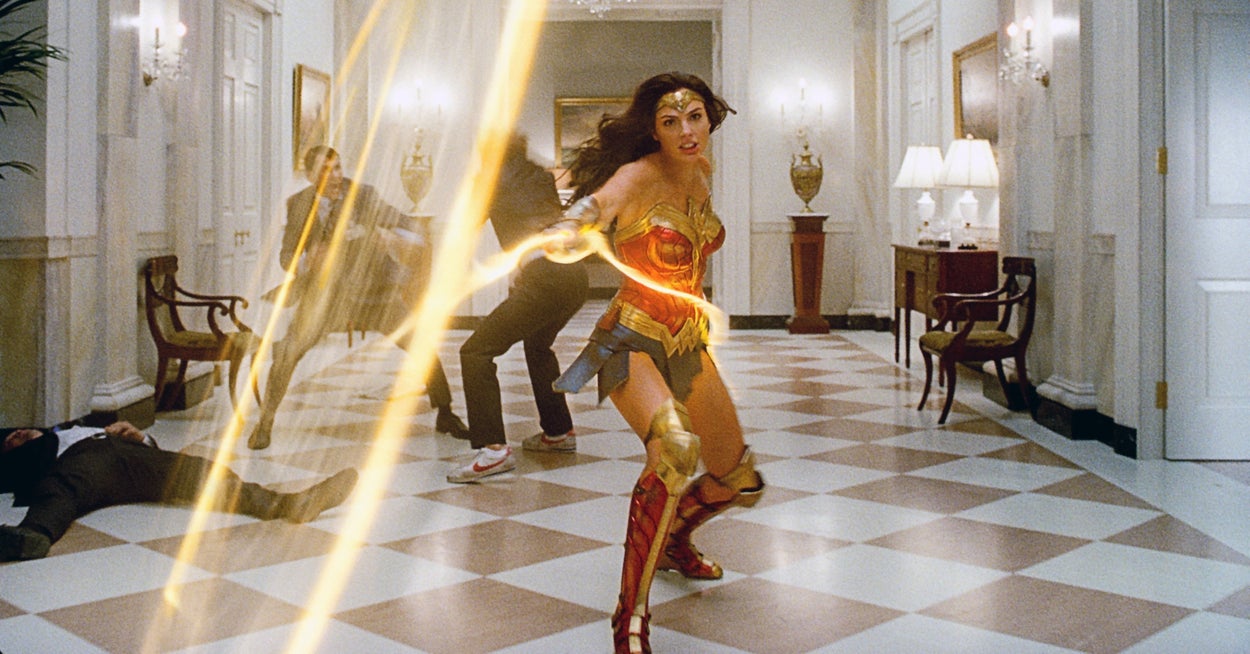 Well guys — after a six-month delay — Wonder Woman 1984 will FINALLY be released on Christmas day!

Since the first movie was obviously a delight, the second movie has some big shoes to fill!

So, in preparation for the sequel, I thought it might be wise for us to all review what happened in the first film. Here we go:

But — before we get to the backstory — the movie begins with a present-day Diana sitting in her office in Paris, opening a briefcase delivered to her from Bruce Wayne (aka Batman).

Ok, now we can get back to Diana’s origin story, which starts with a wee, child-aged Diana running around her homeland, Themyscira.

The entire island consists of only Amazon women, and Diana is the only child. Little Diana is eager to learn to fight and to train with the rest of the Amazon warriors, but her goddess-like mother, Hippolyta, won’t let her.

Obviously, Diana still trains anyway (thanks to the help of her aunt, Antiope).

We later learn that Themyscira was created by Zeus as a way to keep the Amazons and “the god killer” safe from Ares’s wrath.

Then, we switch to the perspective of adult Diana, who has been secretly training in combat for years with Antiope. Diana accidentally discovers her superpowers while in a practice fight with her aunt.

She runs out of the arena to go ~feel her feels~ and watches as a plane crashes, flown by none other than Mr. Steve Trevor (Chris Pine), who is an American spy.

Then, Steve casually informs Diana of the raging World War (WWI) that is happening just outside the walls of the island and, naturally, she wants to go and help.

In London, Diana is first introduced to Sir Patrick (aka Lupin from Harry Potter, aka David Thewlis), one of Steve’s bosses, who offers them assistance in their quest to try and stop the war.

She is quickly forced to take in the reality of war and decides she has to do something about it. On the front in Belgium, she crosses “No Man’s Land” and saves an entire town from German occupation.

We are now treated to one sweet moment of peace between Steve and Diana as they dance in the falling snow. Everyone is happy because, after their crippling defeat, Germany has (supposedly) agreed to sign an armistice.

Then, Steve learns from Sir Patrick that some German leaders (including Ludendorff) are holding a celebration near the town Diana just saved. This obviously raises suspicion…because what would the Germans be celebrating?

The party doesn’t quite go as planned, and Diana soon finds out that Ludendorff has created a toxic gas — with the help of his eccentric chemist — which he plans to release on all his enemies.

And kill him she does. Except…plot twist: Ludendorff isn’t Ares. Sir Patrick is Ares! So Ares (Sir Patrick) gives his whole villain rant about how he knew who Diana was from the minute he met her.

The we get another plot twist: Ares informs a shocked Diana that the SWORD isn’t the god killer, but it’s actually DIANA herself. She is a literal god created by Zeus whose purpose was to, one day, protect mankind.

Ares tries to convince Diana to join him by telling her how unworthy humanity is of her help, and it almost works…but then she remembers her love for Steve and all of the good she has seen in mankind.

While Diana deals with Ares, Steve is completing his own mission of self-sacrifice: Stealing the plane that was supposed to release the toxic gas and flying it into the sky, blowing it up, and (seemingly) sacrificing himself in the process.

The first movie ends right where it began, with a present-day Diana sitting in her office lovingly caressing the watch Steve gave her and emailing Bruce Wayne back to thank him, writing “Thank you for bringing him back to me.”

So, there ya have it, folks! You’re all ready for Wonder Woman 1984! What was your favorite part of the first film? Who are you most looking forward to seeing return in the sequel? Share your thoughts in the comments below!