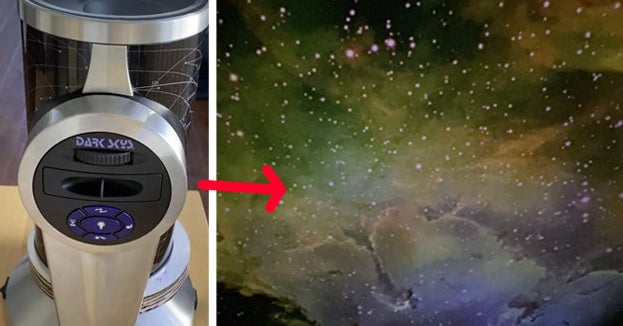 It seems like galaxy light projectors have become a super popular thing during quarantine. I got one myself, and though I like it a lot, it left me wanting a more realistic cosmic vibe.

After doing some research, I found the DS-1 projector: a home planetarium made by a company called Dark Skys. Here’s what the beautiful piece of machinery looks like fresh out of the box.

I bought a variety of discs so I could try out a few different vibes. The options vary, from dusty nebulas and starry galaxies, to things like a stormy night, the deep ocean, or the United States Capitol dome. Here’s what the discs look like:

I’ll preface this by saying that nothing you’ll see here will truly do this thing justice. It’s like trying to photograph a full moon on your phone’s camera — impossible to capture all of the detail and beauty. To start, let me show you the Eagle Nebula disc. (If you want to watch the projector in action, here’s a TikTok showcasing its capabilities.)

Here’s a wide-angle view of the Eagle Nebula disc being projected onto my ceiling. It really makes it feel like I’m cruising aboard some sort of intergalactic airline.

Here’s a closer look, where you can see more of its details (including a shooting star, if you watch the bottom of the image).

And here’s an EVEN CLOSER look, showcasing the countless tiny stars that are visible, even through my iPhone’s camera lens!

This is what the Southern Hemisphere disc looks like. It’s legitimately like being in the middle of nowhere, far away from city lights, staring up at a clear night sky. The disc literally has OVER FOUR MILLION STARS, so it sort of consumes the entire room.

As it rotates, you get different angles of clusters of stars and it makes you feel like you’re living in a time before smog and light pollution existed.

As I mentioned, there are a bunch of less space-themed options, like this Stormy Night disc, which is definitely cool if you want to feel like you’re having a rainy night, sans the downpour.

Personally, I’m more of a galaxy guy. So, one of my favorites is the Solar System disc. The planets are to scale in size (not distance), so when you let it rotate, it really feels like you’re journeying through space. For example, here’s what the view right above you is one minute…

…and here’s how bright it is minutes later, when the sun swoops in overhead!

And if the projections are too much for you come bedtime, this also has a sweet nightlight option that turns it into a glowing cylinder of stars that’s also pretty dang mesmerizing.

Whether you’re a stargazer, an artist looking to set an inspiring atmosphere, or just someone who wants a profoundly dope vibe at night — home planetarium projectors might just be the way of the future.