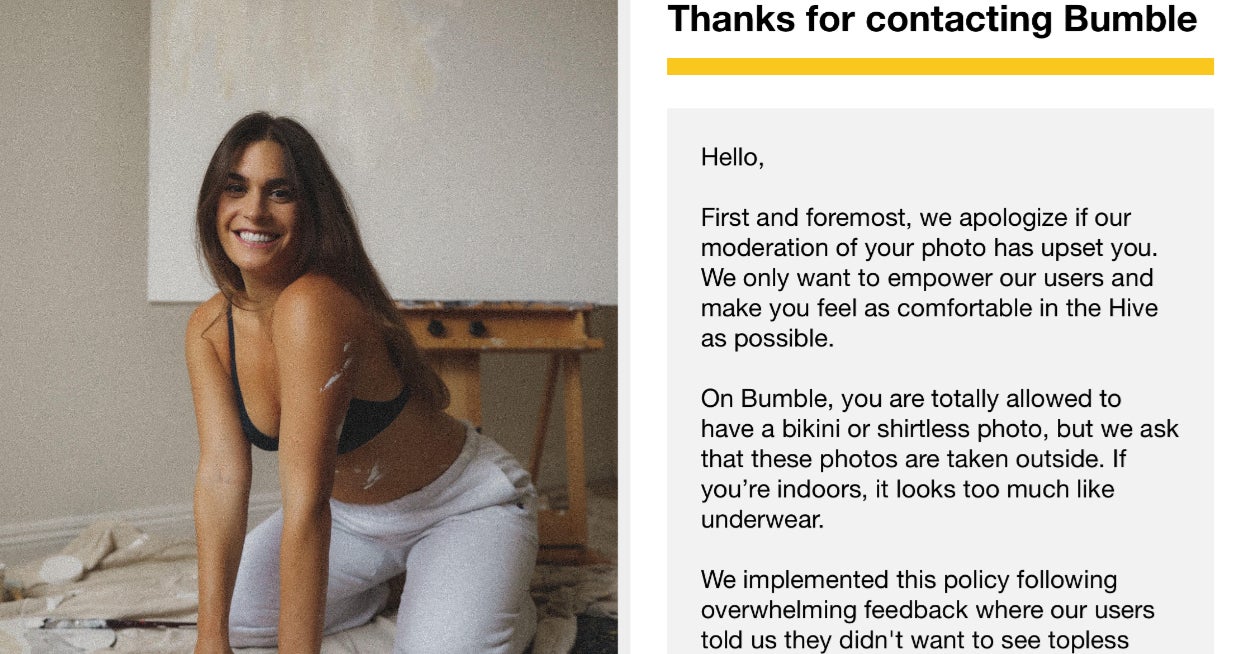 
A 31-year-old artist based in Los Angeles is disputing a clause from Bumble, which specifically bans bikini photos indoors, after they removed several of her photos for violating the community guideline.

Earlier this month, Cali Rockowitz tried to upload this photo to her Bumble profile. She’s seen wearing a black bralette and sweatpants in front of a canvas.

Rockowitz told BuzzFeed News that the photo was “immediately taken down” by the company each time she tried to upload it.

“I thought it was a mistake, so I tried it a bunch more times. I emailed them and I asked what was going on,” she said. “They sent me a generic email saying I couldn’t post photos in my underwear. I couldn’t believe it that after looking at this image they thought this was offensive to users.”

In the first email Bumble sent to Rockowitz on December 9, a customer service rep stated that “photos in lingerie/underwear are removed from the app.”

She was surprised by their “strict policy,” but she said she did not want to “fight this fight,” so she left it at that.

A few weeks later on December 21, however, Rockowitz decided to upload another image from the same photo shoot that she thought was “less revealing.” This time, her hair is covering most of her bralette top.

When the newer photo was also flagged, and Rockowitz once again inquired why, she received a second email from Bumble with more specific information about their photo guidelines.

“On Bumble, you are totally allowed to have a bikini or shirtless photo, but we ask that these photos are taken outside,” a rep wrote in an email to her. “If you’re indoors, it looks too much like underwear.”

Rockowitz was floored by the explanation. “I just thought that was asinine,” she said.

A Bumble spokesperson confirmed the policy to BuzzFeed News, adding that it was created in 2016 after the app received complaints from other users, and data found that those photos were not being swiped on.

“We banned shirtless bathroom mirror selfies in response to feedback from our Bumble community — and after our research showed that profiles including those kinds of photos were the most swiped left on,” they said in a statement. “As part of that overall policy, our photo guidelines prohibit photos of people indoors wearing swimsuits or underwear.”

“Swimsuit photos are acceptable if you’re outside by the pool or on the beach as you’re in a natural setting to be wearing a swimsuit.”

“It’s just absurd to me,” Rockowitz said. “I was like am I going crazy?”

She then posted about it to her Instagram stories this week, where it ignited a ton of DMs and confusion from her followers. Because she tagged Bumble in her stories, another rep contacted her over Instagram DM, asking Rockowitz to contact the support team again so they could assess the situation better.

After all of this, Rockowitz said another photo that had been on her profile for months was also removed.

In this photo, she’s seen in another black bralette top with a black blazer over it. (Rockowitz has since reuploaded this photo, and it’s remained up.)

“I’m not sure if they were doing it to make an example out of me or it really violated the terms, but the images they removed have them up there for months,” she said. “I I don’t know if it’s a mistake.”

BuzzFeed News has reached back out to Bumble to inquire.

Rockowitz continued to vent her frustrations to her followers on Instagram about her ongoing saga with Bumble. Some of them provided hilarious resolutions, like photoshopping her “outside” so that the app could permit her photos.

Unfortunately, the last Bumble rep Rockowitz was in touch with did not find these photoshopped images funny nor permissible.

When she tried to present her outside bra photos, the rep responded over Twitter DM saying, “That photo has been photoshopped, it was not originally taken outside.”

For Rockowitz, the issue is bigger than photo restrictions. She said it feels especially counterintuitive for a company like Bumble, which markets itself as empowering to women to make the first move on a dating app.

“I couldn’t fathom why [the photos] wouldn’t be allowed on a dating profile. Their stance is to empower women. [The app] is made for dating and intimacy. It just makes me never want to use the app again.”

She hopes the company can remove the clause altogether — or, at the very least, be more nuanced with how it enforces it.

“If they’re going to enact the policy they should assess it on a case by case basis. They can’t just blanket this algorithm.”