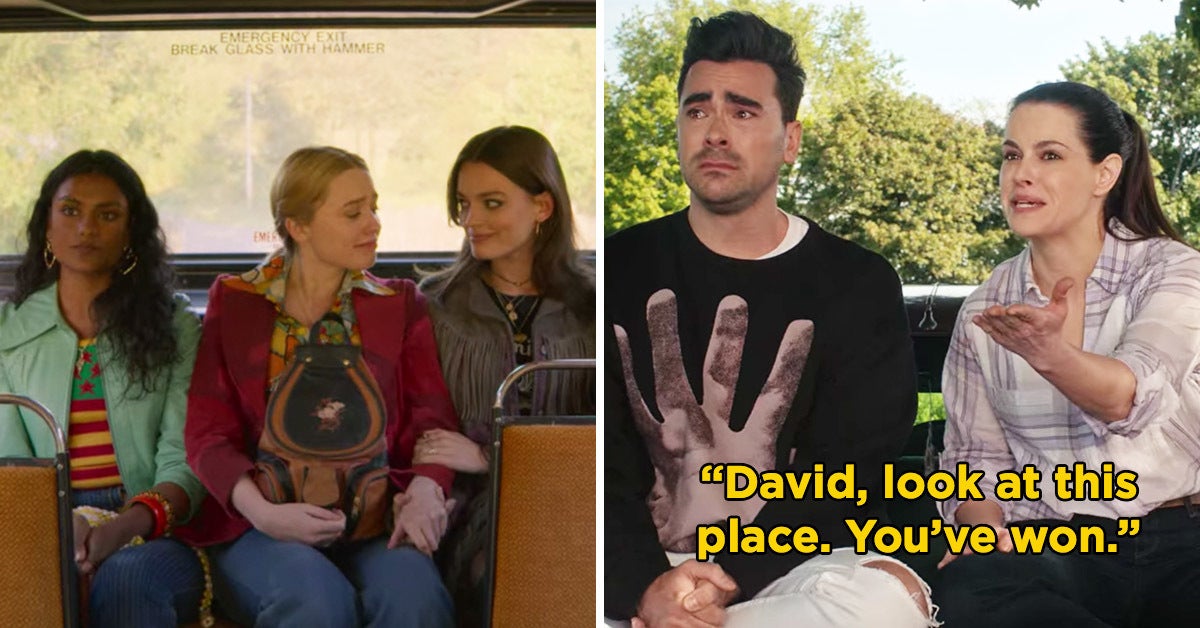 
🚨Warning: This post is literally all MASSIVE spoilers! And there are mentions of sexual assault.🚨

First, on The Mandalorian, when Mando and Baby Yoda met up with Ahsoka Tano, and she revealed that Baby Yoda’s name is Grogu.

Also on The Mandalorian, when Mando reunited with Grogu before Luke freakin’ Skywalker showed up and took Grogu so he could train him.

On The Queen’s Gambit, when Beth finally beat Borgov in Russia during the series finale.

On I May Destroy You, when Arabella revealed to Terry that she dedicated her new book to her.

On Schitt’s Creek, when Alexis and Ted heartbreakingly decided to split, but not before saying that they loved each other.

And on Schitt’s Creek, when Twyla shockingly revealed to Alexis that she’s actually a multimillionaire.

And on the Schitt’s Creek series finale, when Patrick and David adorably got married.

On Sex Education, when Maeve and the rest of the girls accompanied Aimee on the bus.

On Euphoria, when Rue said how she wanted her sister and mom to remember her after she was gone.

On The Good Place series finale, when Chidi and Eleanor spent one last night together before Chidi left the Good Place.

And on The Good Place, when Michael uttered this truly iconic final line while he was on Earth.

On The Haunting of Bly Manor, when Hannah figured out that she was actually dead, so she repeated everything about herself so she wouldn’t forget.

Also on The Haunting of Bly Manor, when Jamie swam to the bottom of the lake and found Dani.

On Normal People, when Connell told Marianne that he would never feel the same way about anyone else.

On Brooklyn Nine-Nine, when Rosa brilliantly won the Halloween heist and became the ultimate human/genius.

Also on Brooklyn Nine-Nine, when Amy gave birth to her and Jake’s son and Jake said he was proud of her.

On the Criminal Minds series finale, when Penelope delivered a heartwarming speech about working with everyone.

On Dead to Me, when Jen begged Judy to hit her, but Judy started crying and Jen comforted her.

Also on Dead to Me, when Season 2 ended with Judy and Jen getting into a car accident.

On the Agents of S.H.I.E.L.D. series finale, when Jemma and Fitz finally reunited, and then reunited with their adorable daughter.

On The Fresh Prince of Bel-Air 30th anniversary reunion special, when Will Smith and Janet Hubert had a conversation about their feud and were able to reconcile.

On Grey’s Anatomy, when Meredith read Alex’s goodbye letter and learned that he left Seattle and is back with Izzie.

And on Grey’s Anatomy, when Jo read Alex’s goodbye letter and it revealed that he’s still in love with Izzie.

On Grey’s Anatomy, when Meredith and Derek reunited in a beach dream sequence while Meredith was unconscious due to having COVID-19.

And on Grey’s Anatomy, when Meredith reunited with George on the beach and she finally got to tell him that he changed her life.

On This Is Us, when Randall and Kevin got into a huge fight and Kevin said the worst day of his life was when Jack and Rebecca brought Randall home.

And on This Is Us, when Randall explained to Kate that he’s been masking his pain about racism and police brutality for years because they never really talked.

On The Umbrella Academy, when Ben asked Vanya to hug him before he disappeared.

On the How to Get Away With Murder series finale, when Frank and Bonnie were tragically killed in a shooting outside the courthouse.

On 13 Reasons Why, when Justin died surrounded by Clay and Clay’s parents after he was diagnosed with HIV-1 and it had progressed to AIDS.

On Never Have I Ever, when Devi arrived at the beach and apologized to her mom before they scattered her dad’s ashes.

On Insecure, when Condola revealed to Lawrence that she’s pregnant, and Lawrence telling Issa that it happened before they got back together.

On the Arrow series finale, when Oliver and Felicity reunited in a paradise dimension, which resembled where Oliver first saw Felicity.

On Lucifer, when Chloe decided to be vulnerable around Lucifer and they shared a kiss.

And on Lucifer, when God showed up to stop a fight between Lucifer, Amenadiel, Maze, and Michael.

On Money Heist/La Casa de Papel, when everyone mourned Nairobi after she was killed.

On Wynonna Earp, when Wynonna was finally reunited with Peacemaker.

And on Wynonna Earp, when Waverly adorably proposed to Nicole again.

On I Am Not Okay With This, when Syd accidentally exploded Brad’s head with her powers.

On the Modern Family series finale, when Cam thanked the entire family for welcoming him.

On Julie and the Phantoms, when Julie visited Luke’s parents and gave them his song “Unsaid Emily.”

On Supernatural, when Cas confessed his feelings for Dean right before he died to save him.

And on the Supernatural series finale, when Sam and Dean reunited in heaven after Dean died and Sam lived a full life.

On Killing Eve, when Villanelle told Eve to turn around, walk away, and never look back, but they both couldn’t do it.

On Legacies, when Alaric, Lizzie, and Josie were trapped in the prison world with Kai.

On Little Fires Everywhere, when Mia explained to Elena that she had options given to her because she was rich and white.

And on the Little Fires Everywhere series finale, when Elena said that she never wanted Izzy and that’s what caused Lexie, Moody, and Trip to set the house on fire.

On Elite, when Lu gave this amazing testimony after Polo’s death.

On Lovecraft Country, when Leti smashed a bunch of cars that belonged to her white neighbors who didn’t approve of her moving to the neighborhood.

And on Lovecraft Country, when Ruby transformed back into herself and took care of her racist boss.

Also on Lovecraft Country, when Ji-Ah told Tic that she first met him when he murdered her best friend.

On The Undoing series finale, when we found out that Jonathan actually did kill Elena.

On Love, Victor, when Victor traveled to New York City and hung out with Bram and Simon.

On The 100, when Clarke shockingly killed Bellamy after he wanted Madi and her sketchbook.

And on The 100 series finale, when Clarke reunited with a version of Lexa.

On The Boys, when it was revealed that Stormfront has been alive for years and was married to Frederick Vought.

And on The Boys, when Ryan accidentally killed Becca while using his powers.

Also on The Boys, when it was revealed that Victoria was the Supe behind the exploding heads.

On Zoey’s Extraordinary Playlist, when everyone performed “American Pie” at Mitch’s funeral.

On The Flight Attendant, when Buckley — aka Felix — followed Cassie to Italy and almost killed her, until Shane came to her rescue.

On Fuller House, when Uncle Jesse explained where Aunt Becky was.

On Good Girls, when Rio revealed to Beth that he’s still alive and she didn’t actually kill him.

On the Cable Girls/Las Chicas del Cable series finale, when the girls said how much they loved each other while they were hiding.

On On My Block, when the series flashed forward and we learned that Monsé, César, Ruby, and Jamal don’t really hang out anymore, and César had joined the Santos.

On Outer Banks, when John B. and Sarah Cameron made it to the Bahamas, but Kie, Poe, and J.J. thought they died in the storm.

On Big Sky, when Cassie shot Legarski after finally tracking down where he was holding Danielle, Grace, and Jerrie.

On Black-ish, when Bo explained to Junior what it was like working in the hospital and dealing with COVID-19 patients.

On The Bold Type, when Sutton told Richard that she realized she doesn’t want children.

On Chicago P.D., when Kim heartbreakingly lost her baby after she was attacked while trying to save a young girl.

On Cursed, when Nimue rose from a lake and killed a bunch of Red Paladins.

On Defending Jacob, when Laurie was speeding in her car and begging Jacob to tell her what really happened.

On Doctor Who, when the 13th Doctor uncovered a TARDIS and we learned that Ruth is actually The Doctor — this marks the first Black Doctor in the history of the series.

On the Homeland series finale, when Carrie sent a secret message to Saul in her new book.

On Legends of Tomorrow, when Ray bid a heartbreaking goodbye to Nate before he left the Waverider.

On Motherland: Fort Salem, when Tally shockingly sacrificed her youth to save General Alder, while Abigail and Raelle were tragically left behind at the end of the mission.

On One Day at a Time, when Lydia, Penelope, Elena, and Alex spread Berto’s ashes in the garden he loved.

On Outlander, when Jamie was dying and Claire begged him to survive so they could continue to be together.

And on Outlander, when Claire was sexually assault and she said that she wouldn’t let this break her.

On PEN15, when Maya and Anna hilariously tried to practice magic.

On Prodigal Son, when Ainsley shockingly killed Nicholas after he threatened Malcolm and Jessica.

On P-Valley, when Hailey ended up using Montavius’s cash to buy and officially save the Pynk.

On Riverdale, when Jughead was revealed to actually be alive and he faked his death to get back at the Stonewall Prep kids.

On Roswell, New Mexico, when Isobel decided to have an abortion and she envisioned Max.

On the She-Ra and the Princesses of Power series finale, when Catra saved Adora and revealed that she loved her.

On Station 19, when Miller and Sullivan were arrested by the Seattle PD while trying to help two young girls after they were kidnapped.

On Supergirl, when Lena apologized to Kara and said that she wanted to make this world a better place again.

On Superstore, when Jonah and Amy heartbreakingly broke up before Amy moved to California.

On Ted Lasso, when the team lost in the final moments of a game, and Ted gave this speech to them.

On Teenage Bounty Hunters, when Sterling and April kissed for the first time.

On The Good Lord Bird, when Onion and John Brown said goodbye to each other before John Brown’s execution.

On The Magicians series finale, the gang managed to grow a new world for Fillory, but it meant that Margo, Fen, Josh, and Alice ended up being separated from everyone else.

On The Walking Dead, when Michonne called Judith and told her she was going to find Rick.

And on The Walking Dead, when Maggie returned and reunited with Judith.

On The West Wing reunion special, when the entire cast reprised their roles for a staging of “Hartsfield’s Landing.”

And finally, on Harley Quinn, when Harley and Poison Ivy revealed their feelings for each other, and then left Poison Ivy’s wedding together.

What were your favorite TV moments of 2020? Tell us in the comments below!