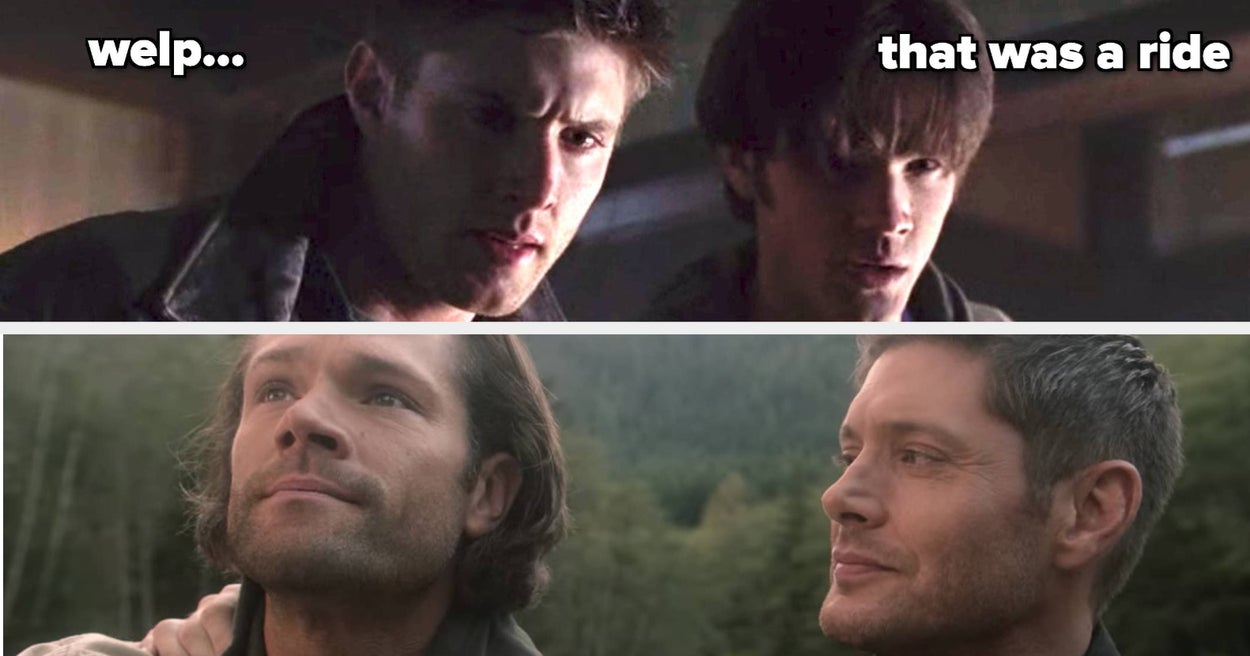 Hey TV fans. I’m Farrah, and if you haven’t been here before, let me quickly explain what you’re about to read. I watch the first episode of a TV show and the finale without any context of what’s in between! Today, I’m tackling an iconic show. You know what it is.

I don’t know a lot about this show other than it’s paranormal and that it aired when I was still in high school. I never watched it because I was afraid of ~nightmares~, but it must be a really fantastic show because it’s been on for FIFTEEN. YEARS.

We’re opening up with a bit of creepy backstory. Sam and Dean are little. Also, Sam is clearly a demonic baby. I don’t trust him. He’s got some evil powers. I sense it.

WHAT ON EARTH, I was not expecting this horror movie moment so soon, but they really went all out in the first four minutes!!!!

UM, OK CW!!! The budget jumped out! This show really said, “WE BURN IT ALL IN THE COLD OPEN.”

I’m crying AHHHH I didn’t realize this was the dad at first!!!! HAHAHA. I thought they were getting snatched by the scary shadow man who stood over Sam’s crib.

Time jump! Present day. Okay, this is going to be very confusing for me because I know this guy from Gilmore Girls and his name was Dean and now you’re telling me it’s his brother who is named Dean??? Also, his girlfriend is named Jess???

Dean shows up to Sam and Jess’s home uninvited — literally breaks in, like, my guy, do you know what doorbells are? — they wrestle(?), and then Sam is like, “We gotta go find dad” while Jess is like, “Wait what?”

Dean wants Sam to come, but Sam has a law school interview, and besides, he’s over demon hunting.

But Sam’s kind of a pushover, right? So eventually he agrees to go with his brother.

Meanwhile, we get a ~preview~ of what Sam and Dean are about to encounter. This guy is driving down a dark and scary road when he sees a ghost girl in a tattered white dress just hanging out. Not sus at all.

Anyway, she kills him. We definitely saw that coming.

Sam and Dean get into town and find the dead guy’s girlfriend, who explains the small town legend about “the woman in white” who haunts a certain bridge. Then *DING* a lightbulb moment happens.

So, of course, Sam and Dean have to go inspect the haunted bridge, where there’s a ~tense moment~ between them.

Then, suddenly, Dean’s car starts driving on its own!!! (Honestly, Sam, for wanting to be a lawyer, you sure ask some obvious questions.)

The car chases them down the bridge, so they have to jump off the sides in order to avoid getting run over. One of them lands in the lake, the other does not.

They decide to check into a motel and discover it’s the SAME ONE their father checked into. But is he there? No! However, he’s got a whole murder board on the wall in an attempt to solve the supernatural mystery.

Sam is, I assume, the brains of this operation and understands the complexities right away.

Then, Sam (I keep having to stop myself from typing Dean) goes to the dead ghost’s husband and explains that his ghostie wife is all up in this town doing haunty things.

Sam then goes to try and find this woman, but *SURPRISE* the ghost woman finds him.

Apparently, these types of ghost only like to murder cheaters, so Sam thinks he’s safe.

She *invasively* CRAWLS INTO HIS LAP and forces a smooch so she can get her revenge on Sam being unfaithful to Jess. Yikes on so many levels.

But don’t worry, Dean came to save the day. At first I was like, “Why is he shooting a ghost with a gun?” but then I realized earlier he mentioned infusing silver in bullets and I guess that’s what kills them??? Anyway. It’s lucky he didn’t blow his own brother’s head off.

But then ghost girl *transforms* and disappears. (Side note: This is some really phenomenal makeup work for 2005.)

Sam drives the car straight into the home that’s basically the haunted mansion from Disneyland, and we see the spirit of the woman turn into a demonic soul????

To top off the overall *sinisterness* of this situation, her two dead children call her home. Thanks, I hate it.

I mean, to be honest, these two didn’t do much except drive a ghost girl back home so her creepy children could take her to some dark afterlife, but okay.

Now that THAT is over, Dean is like, “If my car is damaged, I’m going to kill you” but also, he was the one shooting his own windows out, so…

But guess what?! They still don’t know where dad is! Sam is *over it.* He’s like, “Dude, just take me home so I can go do my lawyer things in the morning.” So Dean does just that.

Sam goes back home and hears Jess in the shower. AND THEN SOMETHING HAPPENS I DIDN’T SEE COMING!!! Sam kills his girlfriend! (Not really. But it connects with what we saw in the beginning. Sam is for sure a demon.)

Dean comes back (It’s unclear why?? Did he see the fire??) and saves Sam from going up in flames with the rest of the house.

Now that Sam has lost a loved one, it *seems* like he agrees to leave his normal life behind, joining Dean on a demon huntin’, dad findin’ adventure!!!!!

Okay, listen!! This was a great pilot!! Before, I was like, “Why has this show been on since the peak popularity of iPods?!” But I GET IT. What stakes! What characters! I see why the fanbase is alive and well.

What!!!!!!! NOT DEAN TURNING INTO A SOFTIE AND MAKING MY PREDICTION A REALITY IN THE FIRST FIVE SECONDS.

They are not *babies* anymore! TEAR.

I’m not sure what’s happening…but they’ve both decided to go to a pie festival? I guess I can support it?

Meanwhile, ~sinister stuff~ is happening at this random house. A father gets stabbed through the chest and dies in front of his wife. So, super lighthearted!

After these guys in clown masks raid the house, two little boys escape. My understanding is that the dad died and the mother had her tongue cut out? Unclear if she’s dead.

I’m not sure if this is, like, an inside joke or if the show decided, “Hey, I’m not taking myself seriously anymore!” But the bad guys are…mimes?

Dean and Sam are able to track down the bad guys before they take more children. Upon confrontation, this clown/vampire/mime thing explains where they took the two boys. Is this like Scooby-Doo where the real monsters are humans or something?

Anyway, more clowns await by the time they get there. The boys are also there, and Dean and Sam tell them to run.

Jenny appears? I guess this is someone I would know if I had watched the show, but I didn’t! It’s also strange that they kill her .5 seconds later?? I guess she was not super evil.

OH NO. NO NO NO. After killing all the evil clown/vampires, Dean is fatally wounded. Also…*this* is the thing that fatally wounds him?!

Sam says he’s going to get help, but Dean won’t let him because he knows his time is going fast. Also, he said he won’t let Sam ~bring him back,~ so I guess that’s something that’s been done before?

NOBODY WARNED ME. I’M OVER HERE SNIFFLING EVEN THOUGH I’VE WATCHED ONE-AND-A-HALF EPISODES. Also, this mirrors the end of the pilot when he says, “We made one hell of a team.”

Fuck me, the writers really weren’t playing around with the emotions in this finale. Are you guys okay?????

Unfortunately, Dean dies. Are you kidding me? Also, STOP IT RIGHT NOW. THEY BROUGHT HIS DOG TO HIS FUNERAL. (Did they not have any friends? Is Sam the only one in Dean’s life?) This is simply too much.

“Is this not sad enough for you? Here, have a forlorn and confused dog waiting on his best friend to return home BUT HE’LL NEVER RETURN HOME. NEVER EVER.”

We see Dean talking to another character I don’t know. He’s in heaven. This finale has some Lost mixed with Vampire Diaries vibes. The man says his father and mother’s house is down the road, but instead of seeing them (???) he goes on a drive (???).

As Dean is on his long drive, we see time move differently for Sam, who’s watching his children grow. It’s unclear who his wife is or if his kids are the ones he saved?? Or if they’re his kids? But anyway, one is named Dean.

All this time, Dean is still driving.

Eventually, Sam is suffering in his old age. His son explains that’s it’s okay to let go, so he does.

Dean stops driving on a bridge, which is perhaps a nod to the pilot? And when he turns around, Sam is there with him.

And it’s very touching and emotional!!!!!!

More in this series:

• “Lost” Is An Iconic Show I’ve Never Seen, So I Only Watched The Pilot And Finale

• As Someone Who Has Never Seen “Criminal Minds,” I Watched The Pilot And Finale And Nothing In The Middle

• As Someone Who Has Never Seen “Gossip Girl,” I Watched The Pilot And Finale And Nothing In The Middle

• As Someone Who Has Never Seen “Sex And The City,” I Watched The Pilot And Finale And Nothing In Between

• I’ve Never Seen “Pretty Little Liars,” So I Watched The Pilot And Finale And Nothing In Between

• I’ve Never Seen “Dawson’s Creek,” So I Watched The Pilot And Finale And Nothing In Between

• I Watched The First And Last Episodes Of “The O.C.” Without Any Context Of The Middle