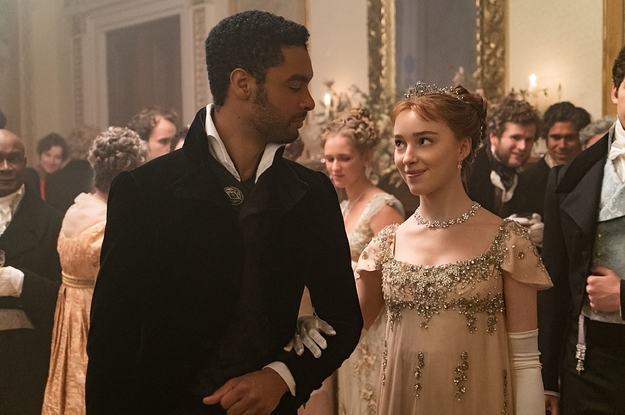 We know you’ve been watching Bridgerton.

The show gets pretty steamy as the first season progresses, as I’m sure you noticed — and actors Phoebe Dynevor (who plays Daphne) and Regé-Jean Page (who plays Simon) spilled the beans to E! News about their experience filming Bridgerton‘s sex scenes.

“I feel really proud of those scenes honestly,” Dynevor said while discussing on-set work with an intimacy coordinator that made the scenes feel “like they were intricate stunts”: “We worked really hard at making them feel real.”

“We were immensely well-prepared,” Page added. “We had dance lessons, writing lessons—essentially, a lot of time in each other’s arms before we even hit the set.

“And so once you’ve spent that many hours on the dance floor with someone, being close to someone, literally catching each other when you fall — and we didn’t fall because we weren’t brilliant dancers — then a lot of it happens quite organically.”

“It’s so important for the journey of the characters to see those scenes,” Dynevor continued. “They’re not just there to be there. They’re there to tell this story of this sort of sexual awakening that Daphne is having and I think that’s so important for her story particularly.”

Showrunner Chris Van Dusen also weighed in on the BTS details: “We had many many conversations about exactly what we were doing. It was all so that the cast would feel comfortable, and we all we really left it in their hands to take the scenes for as far as they wanted to take them.”

“Those scenes were heavily choreographed, much like an action sequence, like ‘Your hand goes here, your leg goes there.’ They were all really, really rehearsed.”

No answer in the interview to the question on everyone’s minds just yet (will it get renewed?!?), but in the meantime it’s more than interesting to get some BTS deets after you’ve finished up the season.