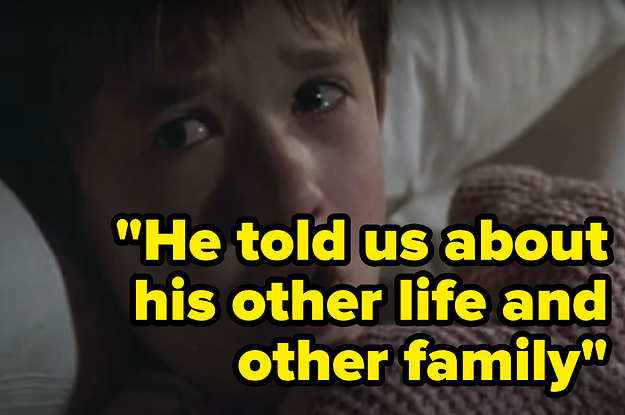 Sometimes kids say some pretty wild things and sometimes what they say is so detailed, it’s hard not to believe them! While not everyone believes in past lives or reincarnation, these stories told by children may have you thinking twice.

TikTok user @fredericaseverinse got people talking by encouraging her viewers to, “Tell about the time your child’s told you a past life story.”

She started things off by sharing the time she was walking with her 3-year-old daughter who pointed out a black bird by its specific name. “I saw one of those with my granddaughter Jenny…Not in this life. In my other life,” the little girl told her mom:

Here are some of the most touching stories:

This mom says her son once told her how lucky he was that he got to choose her as his mom. When she asked him to elaborate he explained that he was walking through the forest with his “other mom” when they saw a cabin she was inside. In that moment he decided he wanted her to be his mom “this time around:”

This woman’s son used to mention another family, so she asked him to tell her more. She says that he had so much detail that it was hard not to believe him. He explained that in the 1940s he lived in a cabin in the woods in New York, where he was a firefighter and had a dog named Pinky. The really crazy part? He says that she was his kid’s babysitter in his past life:

When her daughter was 4 years old, this woman says the little girl saw a 9/11 memorial post and pointed out the Twin Towers. She told her mom that she had previously worked there until one day when the building got very hot. She says she tried to escape with her friends but wasn’t able to and ended up jumping out of a window to “fly like a bird”:

The first time this mom’s son saw the ocean while riding on a plane, he explained that he died trying to save his grandma while swimming. He added that his old name was Zander, which is also his current name. The craziest part? His mom says the name Zander came to her in a dream right before she found out she was pregnant. At the time, she felt so strongly about it, she wrote it down, later giving her son the name:

This young woman says that when she was a little girl, she started sharing very detailed information about England, specifically Hampton Court Palace. Then when she was 19, she had the opportunity to visit and when she stepped inside, she immediately knew where everything was. She even tried to open doors that were locked to show her mom what they were — but those doors had never been opened:

This woman’s niece was definitely a ballerina in a past life! After receiving her first Wiggles ballet barre at a very young age, she sat down and began scraping at her ballet slippers. When asked what she was doing, she replied that she was cutting her slippers “like she used to when she was a ballerina” so she wouldn’t slip and hurt her ankles:

This woman says as a little boy, her son told her a bizarre and very detailed story about previously living on Saturn. He said he had three children and worked in a very tall building filled with vehicles that helped evacuate people to Earth. She checked all the movies and TV shows her son had watched to see if he was making it up and couldn’t find anything remotely similar:

See parts two, three, four and five on her TikTok.

This mom says her little girl had an incredibly sad past life. She’s told her a story about how her parents were killed at a movie theater, leaving her an orphan with no family:

Watch the video of the little girl telling some of the story here.

Ever since he was very young, this woman’s son has prayed to the volcanos. He says that in his other life, he lived near volcanos and built huts while the women hunted. He also mentioned his grandmother was there too and it turns out that she has memories of the location as well!

You can see the picture the little boy drew here.

When this woman was a little girl, she would tell her mother an eerie story about how she walked into the water and never returned:

When this woman’s daughter was 2 years old, she said in another life she was a ballerina who died in a fire. After passing away, she floated into the sky and saw her new mom waiting for her. And upon further research, the woman discovered that many ballerinas in the past had died in fires because their costumes were highly flammable, especially near the gas lighting on stage:

As a 3-year-old, this woman’s daughter told a story about dying in a fire at the carnival where she worked with her brother and parents…all despite never having been to a carnival in her life:

This woman’s son once came home from school with a stack of drawings. When she asked about one of the pictures, he explained that it was “from when you and I were twins.” He added that he knew that she was supposed to have been a twin, but her sibling did not survive birth and he became her son so they could be together again. She had never told her son that her mother had miscarried her twin so many years ago:

Have your children ever told you any past life stories? Share them in the comments!