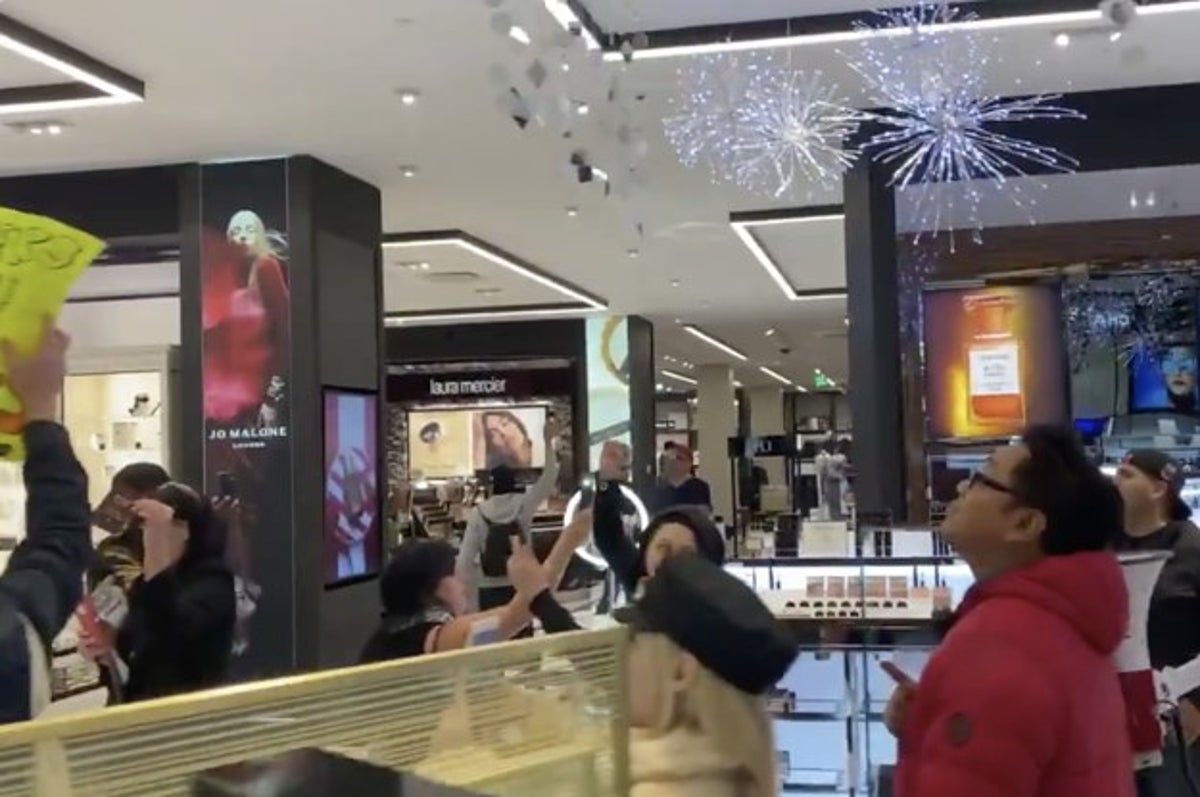 
A group of anti-mask protesters stormed into a grocery store and shopping mall in Los Angeles on Sunday, inciting verbal — and at times physical — altercations with customers and employees as the region grapples with a dangerous surge of the coronavirus.

Videos posted on Twitter show maskless people walking through a Ralphs and the Westfield Century City mall chanting “no more masks” and getting into shouting matches with other shoppers who wanted them to put on a mask or leave. Some protesters are also seen carrying signs calling COVID-19 a “con-job” and claiming that the numbers of cases are inflated.

“I tested negative, so what are you worried about?” said one protester who wore an “All Lives Matter” mask around his chin, before calling a shopper a “mask Nazi.”

Scientists and public health officials have said that a negative test doesn’t necessarily mean a person is not infected, just that there may have not been enough virus to register a positive test at the time the sample was taken.

On Sunday, the Los Angeles County Department of Public Health reported 12,488 new cases of COVID-19 and 91 deaths, bringing the total number of infections to 818,639 and the death count from the virus to 10,773. More than 7,500 people across the county are currently hospitalized with the coronavirus, an unprecedented surge that is overwhelming the region’s healthcare system and forcing workers to treat patients in gift shops and conference rooms.

Last month, health officials estimated that 1 in 80 people in LA County had COVID-19. In late September, that estimate was just 1 in 880 residents, according to the Los Angeles Times. Someone is dying every 10 minutes from COVID-19, according to the health department. And on Sunday, Los Angeles Mayor Eric Garcetti said a new person is getting infected with the virus every six seconds.

While most nonessential businesses, like restaurants and hair salons, are closed under regional stay-at-home orders due to dwindling capacity at intensive care units, retail businesses have been allowed to remain open with limited capacity despite the increase in transmission.

In one confrontation at the Westfield mall on Sunday, a woman who told protesters she was a doctor said her relative was in the hospital with COVID-19. A protester responded, “People die. That’s life. People die. Your father’s not special.”

At the Ralphs, a maskless protester who claimed a customer had hit her chased after the man and tried to ram him with a shopping cart, according to local reporter Samuel Braslow. The protester later kicked the customer as he was checking out.

Other videos showed anti-maskers trying to push open doors of shops that had closed as a result of the protest.

Los Angeles police Officer Rosario Cervantes told BuzzFeed News Monday that there were no arrests connected to the protest at either location, saying officers responded just “to keep the peace.”

Officers did take two battery reports, one at the Ralphs and the second at the mall. Cervantes said she could not disclose any information about the victims and did not know whether the reports were made by anti-maskers or other customers.

During a public conference Monday, Dr. Christina Ghaly, director for the county’s department of health services, reiterated that wearing a face covering isn’t a statement about “how you feel about your own health.”