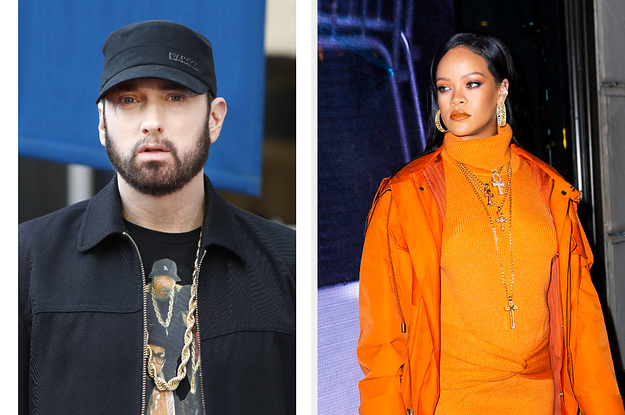 Last year, a leaked Eminem song from 2009 included an offensive lyric referring to Chris Brown’s felony assault against Rihanna that took place during that year: “Of course I side with Chris Brown, I’d beat a bitch down too.”

It was particularly shocking since Eminem and Rihanna have worked together multiple times since, including on the hit singles “Monster” and “Love the Way You Lie.”

Although Eminem’s publicist clarified last year that the verse was eventually scrapped, the rapper also directly apologized to Rih on “Zeus,” from last year’s Music to Be Murdered By Side B.

On Sirius XM’s Shade 45, Eminem explained why he decided to apologize to Rihanna on “Zeus,” as well as his feelings regarding the offending lyric in particular.

“I didn’t know how somebody got it,” Eminem told Sirius XM host Gray Rizzy about how he reacted to the initial leak. “I have no recollection of even remembering doing that. That verse, the rhyme schemes, didn’t even sound familiar to me.”

“I said it and I was wrong for saying that, it was fucking stupid,” he admitted, explaining that while he was recording his 2009 album Relapse he was “learning how to rap again” after battling drug addiction. “That was one of those things that it was like, well, if it rhymes, say it.”

“That’s not even an excuse, but I’m just saying that there was a phase I was going through with that record. It was one of those things. I think I just said it cause it rhymed. Looking back now, I should have thought better of it.”

If you or someone you know is being abused, call the National Domestic Violence hotline at 1-800-799-7233. You can find more resources, information, and support here.