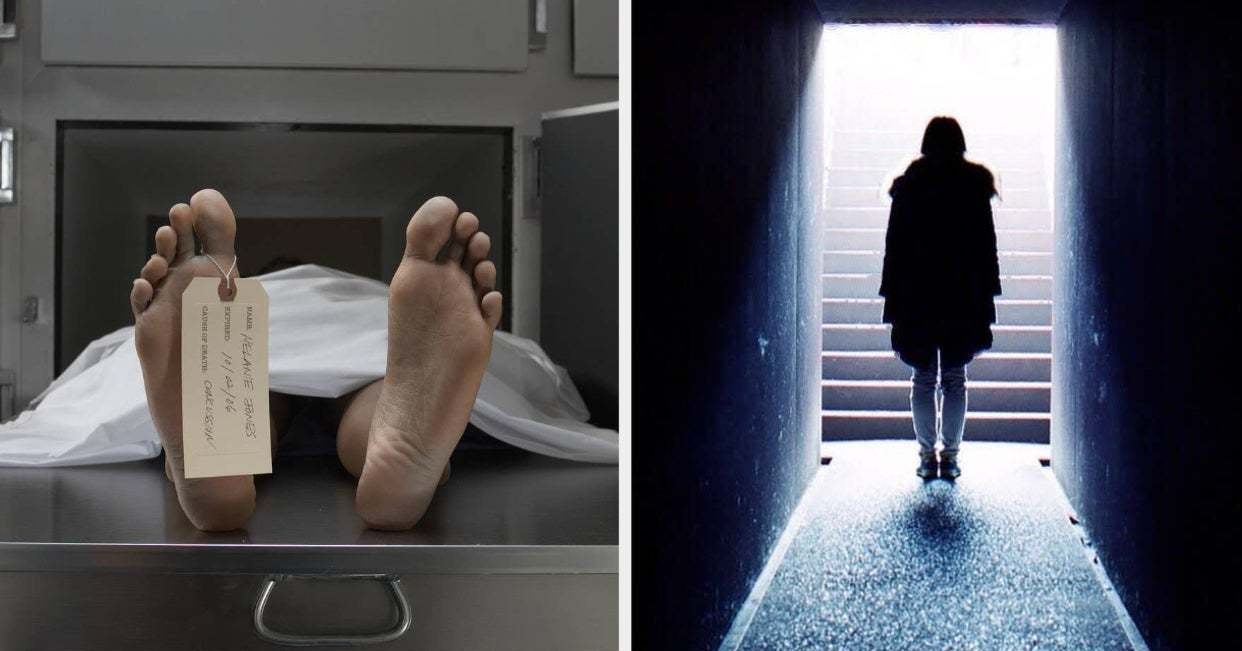 In rare medical situations, a person can die and then come back to life moments later — either through resuscitation or sheer chance.

Well, recently, Reddit user u/Aidanmartin3 asked those who have experienced dying firsthand to share their stories: “People who were pronounced dead and resuscitated, what did you go through mentally while being pronounced dead?”

The responses were fascinating, eerie, and eye-opening. Here are some of the top-voted comments:

“I’ve died once. I don’t remember much about it except there was a nice, dark nothingness which I guess felt kind of cozy, but I also knew it was the end, so I’d better not. … I don’t know, I knew I wasn’t supposed to go into the dark. Like, I was in the dark, but I wasn’t supposed to be enjoying it, because if I embraced it too much I would die. … It was kind of like falling asleep and vaguely remembering a dream when you wake up.”

“My frat brother was clinically dead for 45 seconds. Overdosed on Xanax. The experience changed his life. He never used drugs again. He said he saw himself over the hospital bed and the nurses working. He said as he slowly floated through the roof, a peaceful feeling better than any drug took over. He said you feel free of all worry and regret. He saw the white light allegedly, and a few family members, before they said it wasn’t his time. He floated back to his body.”

“I died from an overdose for a few minutes. There really wasn’t anything. Just blackness and a vague lapse of time. It was almost like waking up from a shitty night’s rest and feeling like a horse had kicked me in the chest.”

“They told me I was dead for three minutes. I remember those clips of people saying they experienced some kind of near-afterlife, but for me it was like sleeping. I woke up, they told me how I almost died, I said, ‘Oh yeah?’ They explained a bunch of stuff and then offered me a grilled cheese…I had Doritos too. 10/10 would die again, it’s just nothingness, not scary at all.”

“My dad died briefly and said that he went down a long hallway to a door. When he was going to open it, he felt himself being sucked back into his own body.”

“I don’t remember anything from the whole day. It happened one afternoon. Only thing I remember is waking in the hospital two days later to a surprised nurse. Turns out they thought I was going to be in a coma.”

“Anaphylactic reaction to an already deadly irukandji jellyfish sting. I coded. Saw this white light and could see my myself ‘floating upwards.’ Saw my family and the doctors and nurses who were working on me. Came back and was in intense pain.”

“My friend was pronounced dead about six times I believe, but only told me two of the experiences. 1) Just pure blackness in an empty space. 2) Their grandfather told them to go back.”

“As my family was saying goodbye to me, I remember seeing three shadow people at the foot of the hospital bed. Thinking it was family, I asked ‘Who are they?’ My mother told me they were angels, but I perceived them as my dead relatives there to bring me to the other side. The nurses then put me under anesthesia so the doctors could hopefully get my brain to stop bleeding. They were successful and I’m still here!”

“I don’t remember any of them. Been declared dead three times and not once did I remember anything during death.”

“I was around 5 years old when I almost internally bled to death from a bad virus. I experienced what I could only describe as maybe some weird limbo in between heaven. It’s weird because I don’t think I even had a concept of heaven at that point, unless it was something I saw in a cartoon.”

“It felt like third-person security camera footage of my body, then slowly zooming out and rising up, felt really, really cold and then I started hearing really loud clanging sounds and woke up in the ambulance to the sound of the gurney bouncing on a rough road. It was surreal. Haven’t feared death since then TBH.”

“It felt like I was in a long tunnel, just floating and feeling very tired. I remember falling asleep and having a dream that I was in the kitchen in the house where I grew up, and my dad was cooking breakfast. I could hear a commotion and chaos at one end [of the tunnel], and at the other end there was a warm light that felt peaceful. Then all of a sudden I was abruptly in the chaos of an emergency room.”

“I remember a feeling of great peace, some flashbacks to my life, but mostly just a remarkable feeling of connectedness. It’s a feeling that changed the course of my whole life.”

“I OD’d and died and was resuscitated. It’s nothingness. Only thing I can compare it to is, you know after a night of drinking, when you close your eyes then open them again and somehow four hours have passed, but it feels like no time has passed at all? That’s what it was like.”

“I got hit by a car. I could still see with my eye that didn’t have blood in it. I could hear all the commotion. I felt getting forced onto my back and then CPR. I felt my first heartbeat and then blood flowing through my body, and at that point I felt all the pain, took a deep breath, and then everything went black.”

“I was about 15. Climbed on top of the kitchen counters to grab something from the top cabinet, slipped and fell head-first on the marble floor. Next thing I knew, I was walking in water barefoot. I look up to my upper right hand side and there’s a BRIGHT light with a hand poking out making the ‘come here’ gesture. I walk towards it. Meanwhile, I realize the PEACEFUL and relaxed state I’m feeling. Like the best deep sleep ever and I say to myself, ‘Man, this is awesome, I never wanna wake up.’ Then all of a sudden, I jolt and I wake up to my mom wailing her lungs out. Apparently I was stiff, cold with no heartbeat, and managed to piss my pants.”

You can read the full thread of responses here.