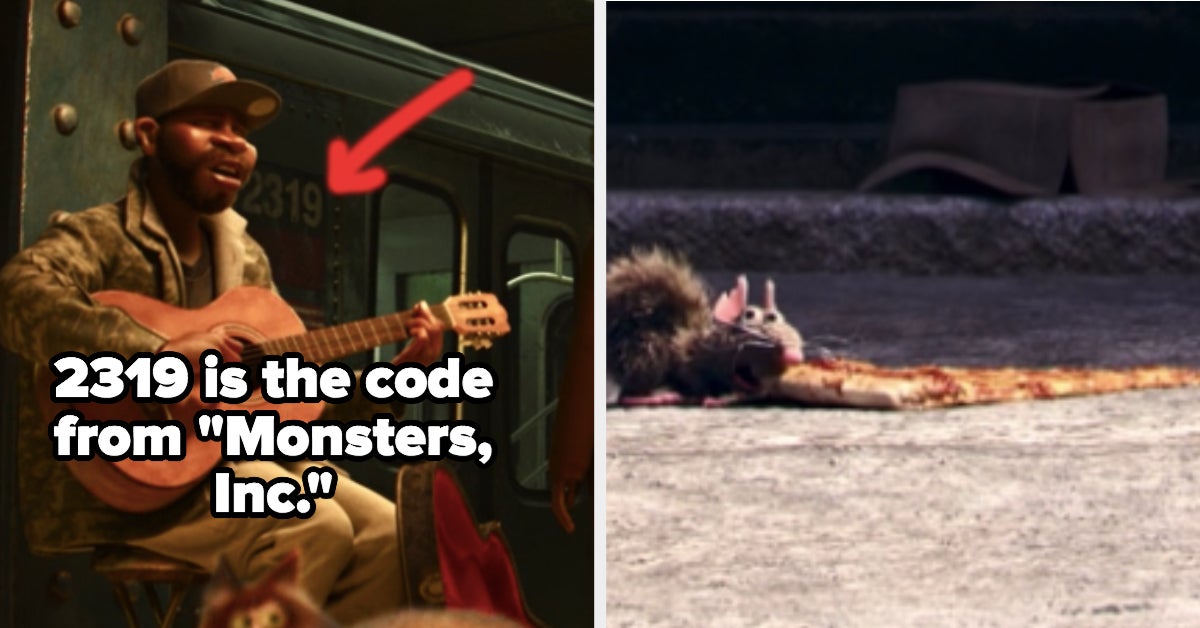 First, in the Hall of Everything, you can spot the signature Pixar lamp, Luxo, talking to one of the souls.

If you look up at the sky in the Hall of Everything, you’ll notice a blimp that looks a heckuva lot like the Spirit of Adventure Blimp from Up.

Back on the ground in the Hall of Everything, you can also see the Pizza Planet truck from Toy Story.

Zooming back out in the Hall of Everything, there’s an Aztec building which might be from Coco and a ferris wheel that looks like the one from Toy Story 4.

Alongside the Eiffel Tower in the Hall of Everything is the Golden Gate Bridge, which may be a nod to Inside Out.

The suspended whale hanging in the Hall of Everything also appears as a display in the Marine Life Institute in Finding Dory.

On a final Hall of Everything note, if you zoom wayyy in, you can spot A113 on a street sign. This is a nod to the animation classroom at California Institute of the Arts, where many Disney artists went to school.

Among 22’s long list of failed mentors is the Queen of France Marie Antoinette. The famous quote “Let them eat cake” is often incorrectly attributed to her, which would explain why 22 is holding a piece of cake in this scene.

Inside 22’s place, you can spot the iconic Pixar ball, which is also originally from the short Luxo Jr.

In the chemistry classroom, the formula written on the chalkboard makes up the compound theobromine, one of the key stimulants in chocolate.

This is a subtle one, but it’s very plausible that the 22 on the hospital machine is meant to foreshadow Joe and 22 switching bodies.

While in the cat’s body, Joe comes across a rat dragging a slice of pizza along the sidewalk in New York City. This is likely a reference to the 2015 viral meme known as “Pizza Rat.”

At the subway station, you can spot the number 2319 behind the guitar player. This is the emergency code they use in Monsters, Inc.

Inside the subway, there’s an advertisement for a company called “brang.” This is the tech company Riley’s dad worked for in Inside Out.

In the scene where Joe goes to ask his mom to fix his suit, there’s a sign on the wall that reads, “Sewing mends the soul.”

In the office scene, a Chinese takeout box can be spotted on one of the employees’ desks. Originally in A Bug’s Life, the box has become a recurring Easter egg in Pixar movies.

And finally, the most clever detail of all: In the montage of Terry searching for Joe, Terry pushes the A1 key on the detuned piano set to 113 Hz. This is possibly yet another A113 reference!