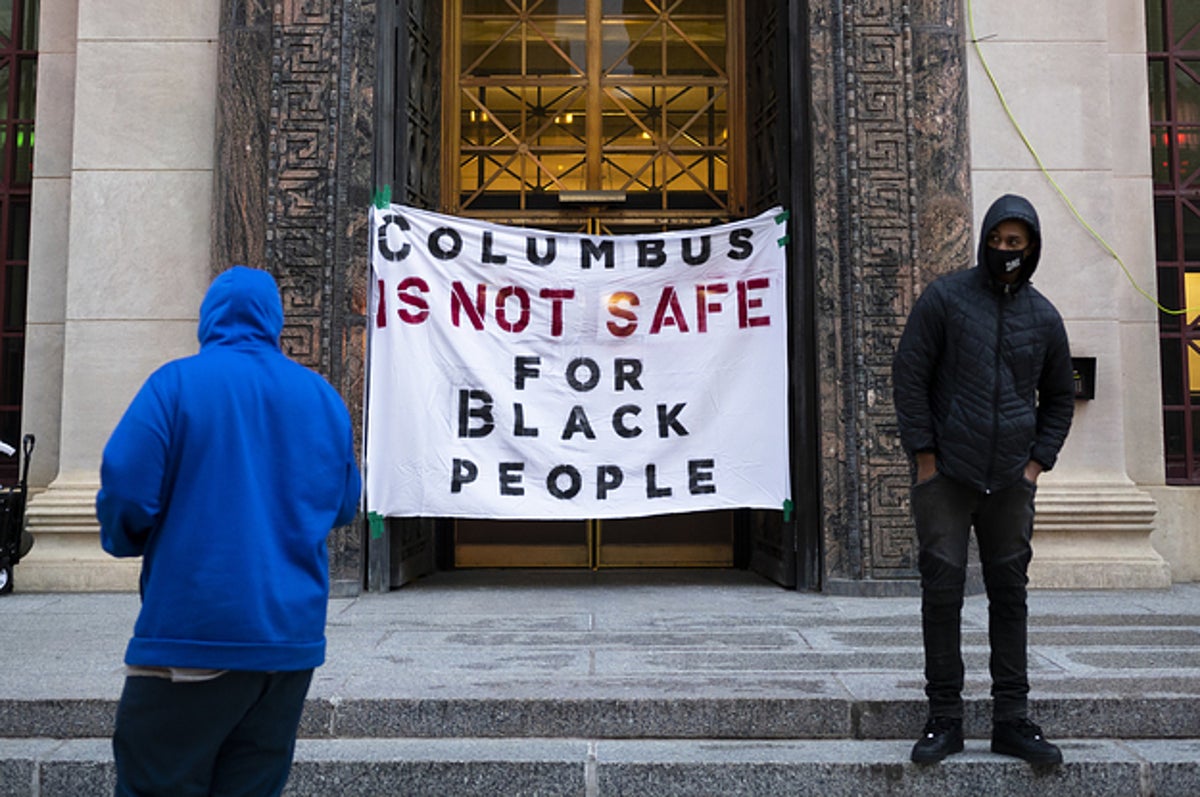 
Tuesday’s funeral for Andre Hill began with a slideshow of photos of the beloved gentle giant across his 47 years — from a little boy in a cowboy hat riding a bike, to a smiling man smoking a cigar in the sunshine, and as a grandfather entering a famed roller coaster amusement park next to a child.

A gospel song by Marvin Sapp played in the background: “Here I am, I’m still standing / Here I am after all I’ve been through / I’ve survived every toil / And every snare I’m alive, I’m alive here.“

Except Hill, an unarmed Black man shot and killed by a white police officer just seconds after the officer arrived and days before Christmas, is not still standing.

His killing was the second of a Black man by law enforcement in Columbus, Ohio, in December, leaving the shaken city to grapple with protests surrounding the two high-profile cases.

The families of both men are now demanding justice and legislative changes as part of the reckoning around systemic racism and police violence.

“Cynicism is a rational emotion right now as we gather at First Church of God to lay our brother to rest,” said Shannon Hardin, the president of the Columbus City Council, speaking at Hill’s memorial service. “It’s a rational emotion as we were here less than two weeks ago to bury our good brother, our kind brother, Casey Goodson.”

Goodson, 23, whose family had gathered for his funeral at the same church, was shot and killed by a sheriff’s deputy on Dec. 4.

The cases are different but contain similarities. Both were Black men from Columbus, both from very close-knit families, both shot and killed by law enforcement in incidents that have gained national attention as neither man was clearly breaking the law or being pursued for a crime when they were killed.

Both men were considered a threat by officers because they were believed to be carrying a weapon. (Hill only held a cellphone, while Goodson had a weapon but was a licensed gun owner in an open carry state.)

Hill was dropping off a Christmas gift to a friend when police responded to a nonemergency call and shot him. His death was ruled a homicide by an Ohio coroner. Footage showed he was left dying for five minutes on the ground, until police realized he was still alive and then handcuffed him but did not provide medical attention.

Goodson was driving home from a dentist’s appointment with his lunch when a Franklin County Sheriff’s deputy, who claims he saw Goodson waving a gun, followed his car. The deputy shot and killed Goodson as he entered his own home. No bodycam footage exists, but he died in front of his family.

Although federal and state investigations are continuing, Walton said Goodson’s family want Meade to face actual repercussions. “Each day that passes they grow more and more adamant in their belief that Jason Meade should be fired and arrested and that it should happen with expediency,” he told BuzzFeed News.

During Hill’s funeral on Tuesday morning, speeches focused on his unjust death and how Black families should not have to bear these enormous losses or be unable to trust police.

“We all want justice for Andre and change needs to come, because as a people we should not have to have our loved ones sacrificed at the hands of evil and violence just to be even heard, looked at, or even considered as equals,” said his sister Shawna Barnett, as mourners clapped. “We shouldn’t have to scream, holler, march, protest, or beg to be treated humanely and cordially as human beings.”

“Our primary focus is the safety of those we serve while treating our residents with respect, dignity and fairness. This was taken straight off their website,” said Harriston. “This did not happen to my brother.”

“It is not a new issue,” said Walton, who has represented more than a dozen families of victims of police brutality in Columbus. Currently he is still representing the families of Tyre King, a 13-year-old shot while holding a BB gun; Henry Green, a 23-year-old shot and killed by police in 2016; and Jaron Thomas, a man with schizophrenia who died in police custody.

Rep. Joyce Beatty, the new head of the Congressional Black Caucus, said at the funeral that the caucus would begin its next meeting with a prayer for Hill and will seek changes to the law on behalf of him and other victims of police violence.

She pledged to aggressively pursue a policy agenda with legislation that aims to combat police misconduct, excessive force, and racial bias in policing.

“It will be grounded in accountability and transparency,” said Beatty. “It will be anchored in justice and dedicated to the memory of Andre Hill and all others who came before him, losing their lives unjustly, unnecessarily, and unacceptably.”

On behalf of their son, Goodson’s family are demanding new a legal protections for Black gun owners.

“We live in a country where it is a constitutional right to bear arms and something people are passionate about, but Black people are not allowed to have that same passion around it,” Walton told BuzzFeed News.

Goodson was a proud gun owner and his family believes that it made him a target. Goodson carrying a gun he was licensed and trained to carry was “viewed as a criminal act,” said his family attorney.

“His death will have to be a catalyst for change in this country, and the conversation around Black people and guns has got to be normalized,” said Walton.

On New Year’s Eve, the Goodson family home was hit by gunfire. Based on the trajectory of the bullets, Walton said, the family believes “it was an intentional shooting” and police are investigating.

It is still unknown when the investigation into Goodson’s death will be concluded and if the sheriff’s deputy who fatally shot him with face criminal charges.

After the 24-year tenure of a Republican county prosecutor who oversaw only one police officer indictment for the killing of a civilian despite multiple high-profile incidents, Democrat Gary Tyack was sworn in as Franklin County prosecutor on Monday night. Tyack made pursuing police misconduct and racial justice part of his campaign promises.

During Hill’s funeral, Rev. Al Sharpton applauded the mayor of Columbus for ensuring the officer who killed Hill was terminated, but said it did not go far enough.

“I salute it, but I’m not satisfied with it,” said Sharpton. “The firing of this man is a personnel decision. That is not a legal decision.”

Civil rights attorney Benjamin Crump is representing Hill’s family, and at Tuesday’s funeral he spoke about the lack of humanity shown to other Black men and women killed in the last year, including George Floyd, Breonna Taylor, and Ahmaud Arbery, whose families he also represents.

On Tuesday afternoon, the Kenosha district attorney announced that the officer who shot Jacob Blake seven times in the back would not face charges. Crump immediately flew to Wisconsin.

But the words Crump said in his speech to Hill’s family at the patriarch’s funeral just hours earlier remained relevant as protests began on the streets of Kenosha.

“We come asking for this plea for justice,” said Crump, “but now…we are also demanding justice.”