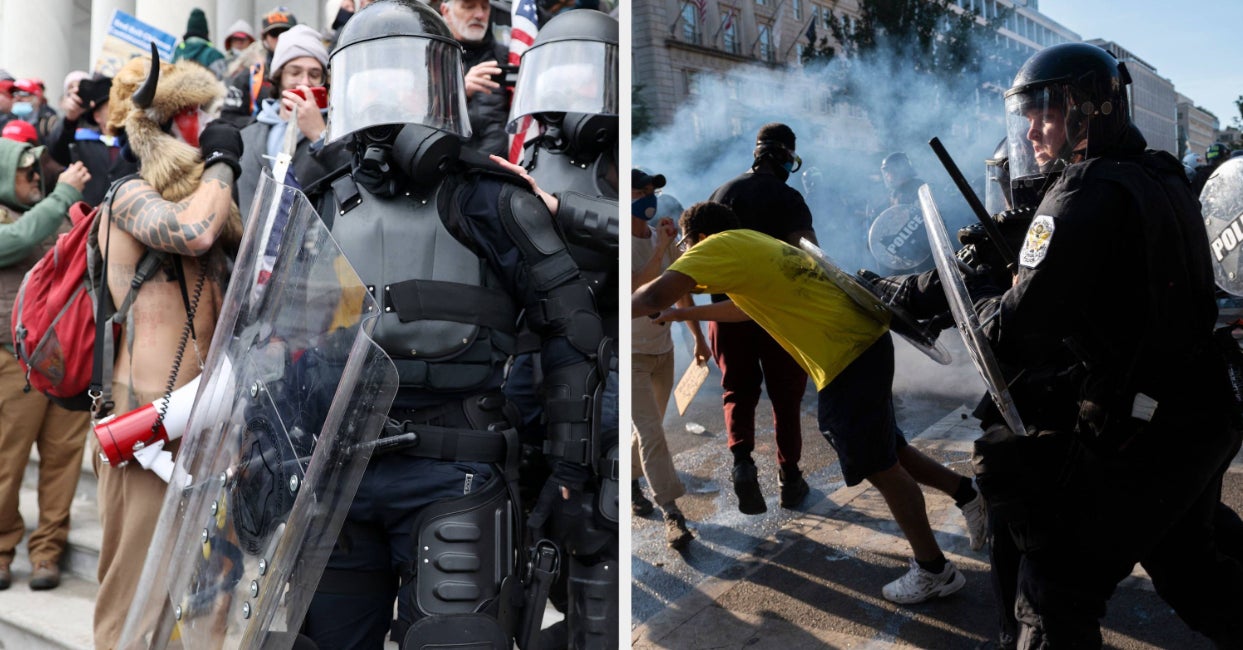 
As supporters of President Donald Trump attempted a coup of the Capitol building in Washington, DC, people noticed a stark difference to how the city looked during Black Lives Matter protests last year.

Last summer, protests broke out across the US in response to police killings of unarmed Black men and women, including Breonna Taylor, George Floyd, and Jacob Blake. These protests were often met with a large response from police, including the use of tear gas and physical violence.

On Wednesday, the storming of the Capitol Building was attended by police, some in riot gear, some who did draw their weapons, as well as the National Guard. But, people couldn’t help but notice how different the images from the attempted coup looked compared to BLM protests.

In response, people have been sharing photos of the BLM protests next to scenes from Washington to demonstrate the difference.

This photo (which some incorrectly stated was taken in front of the Capitol Building) shows the National Guard in formation in front of the Lincoln Memorial on June 2 as protests continued outside of the White House.

This person recalled how they were in Washington during protests and remembers heavy-handed tactics from police.

“Let me say this, I fucking remember, cause I was there. I experienced DC police coming into the fucking McDonalds after macing Karon Hylton-Brown’s mom,” they said.

And yet another remembered what it was like in Portland.

People also recalled when, on June 1, tear gas was deployed against protesters in Washington so that Trump could deliver an impromptu speech at a church located near the White House.

The scenes were also compared to NFL athletes kneeling during the national anthem, a peaceful protest that has been routinely criticized by Trump.

Video shows the moment when people passed through a door way in the Capitol Building, facing only a single security guard who ultimately backed away.

Others shared photos of arrests made by police of protesters with disabilities in 2017.

The arrestees are members of ADAPT, a disability rights group, who were protesting Republican cuts to Medicaid.

Other images just captured the frustration and absurdity of it all.