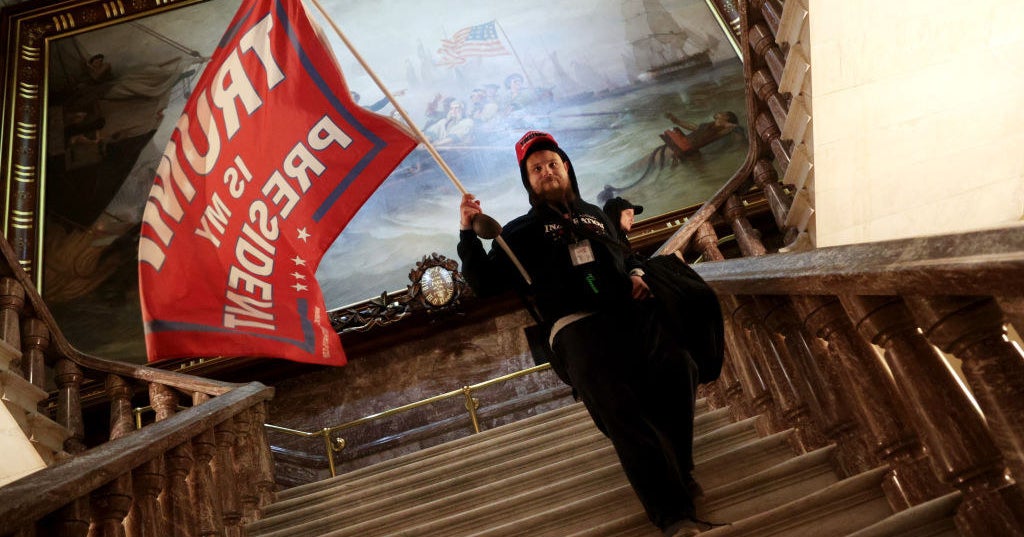 
WASHINGTON — Thousands of supporters of Donald Trump have staged an attempted coup at the president’s urging, rioting and breaching the halls of Congress while elected officials were beginning to certify Joe Biden’s presidential election win, gaining access to the floor of the Senate and setting off an armed standoff with law enforcement in the House of Representatives.

Television cameras captured a person being wheeled from the Capitol on a stretcher, bleeding, with someone compressing her chest.

The insurrection, egged on by an aggrieved Trump who refuses to concede an election he has firmly lost, came when his supporters stormed the Capitol Wednesday morning, with many supporters breaking through barricades of police officers and breaching the doors.

The chaotic scene at the Capitol was unprecedented. Rioters waving Trump flags and banners ostensibly in support of police openly clashed with law enforcement officials, who seemed unprepared for the onslaught of people that the president has been promising for days now.

Members of Congress said tear gas was being dispersed inside of the Capitol building, with members being asked to grab the gas masks below their chairs. As Capitol Police told members to prepare to relocate to their cloakrooms, Democratic Rep. Steve Cohen yelled, “Call Trump! Call your friend!” according to a pool report.

Police began evacuating members of Congress from the House around 2:40 p.m. A Department of Homeland Security spokesperson told BuzzFeed News that Federal Protective Service and Secret Service have been requested to provide assistance to Capitol Hill Police, and they are fulfilling that request.

The mayor of Washington, DC, ordered a 6 p.m. curfew in response to the violence.

The violence from Trump’s supporters had been brewing openly for weeks on the pro-Trump internet, where, on forums like the r/TheDonald subreddit, supporters have been publicly promising violence against lawmakers, police, and journalists if Congress did not comply with Trump’s demand to overthrow the results of the 2020 election.

Just after 2:15 p.m., the House and Senate recessed, and Capitol Police locked the doors to leave the House gallery, according to pool reports. Rep. Dean Phillips of Minnesota reportedly yelled, “This is because of you,” apparently in reference to his Republican colleagues objecting to certifying electoral results.

Trump had urged his supporters to “peacefully” march toward the Capitol building, falsely claiming that Democrats were stealing the election.

“Because you’ll never take back our country with weakness,” he told supporters gathered in front of the White House, “you have to show strength, and you have to be strong. We have come to demand that Congress do the right thing and only count the electors who have been lawfully slated. Lawfully slated. I know that everyone here will soon be marching over to the Capitol building. To peacefully, patriotically make your voices heard.”

Reporters in the Capitol said an audio message played asking people to stay away from exterior windows due to an “external security threat.” The message said no entry into or exit from the building was allowed, meaning the complex is functionally in a lockdown.

Videos show a mass of Trump supporters carrying flags and banners storming law enforcement officials, who pushed, used shields, and fired what appeared to be pepper spray in defense.

Cellphones are not permitted in the Senate chamber, meaning many lawmakers were likely unaware of the chaos unfolding outside the Capitol while they debated the objection. According to a pool report, Senate leadership appeared to be passing notes during the debate and looked concerned. Soon after, the Capitol was locked down.

Capitol Police ordered the evacuations of two Capitol campus buildings: the Madison Building and Cannon House Office building. It was unclear why the buildings were evacuated, but alerts sent to staffers said it was due to “police activity.”

Police also sent an alert saying they were investigating a suspicious package in the 300 block of First Street SE. Capitol Police later gave the all clear to staffers in the Cannon House Office building.

Members of Congress tweeted that they were being evacuated or sheltering in place because of the police activity.

South Carolina Rep. Nancy Mace tweeted that she evacuated her office in Cannon “due to a nearby threat.” “Now we’re seeing protesters assaulting Capitol Police,” she tweeted. “This is wrong. This is not who we are. I’m heartbroken for our nation today.”

Virginia Rep. Elaine Luria, who also evacuated her office, tweeted, “I don’t recognize our country today and the members of Congress who have supported this anarchy do not deserve to represent their fellow Americans.” Michigan Rep. Haley Stevens said she was sheltering in place due to evacuations in the next building. “I can’t believe I have to write this,” she said in a tweet.

Trump’s supporters converged on Washington Wednesday, with Congress set to confirm Biden’s victory, at the direct urging of the president. In a tweet, Trump told supporters the day’s events “will be wild.”