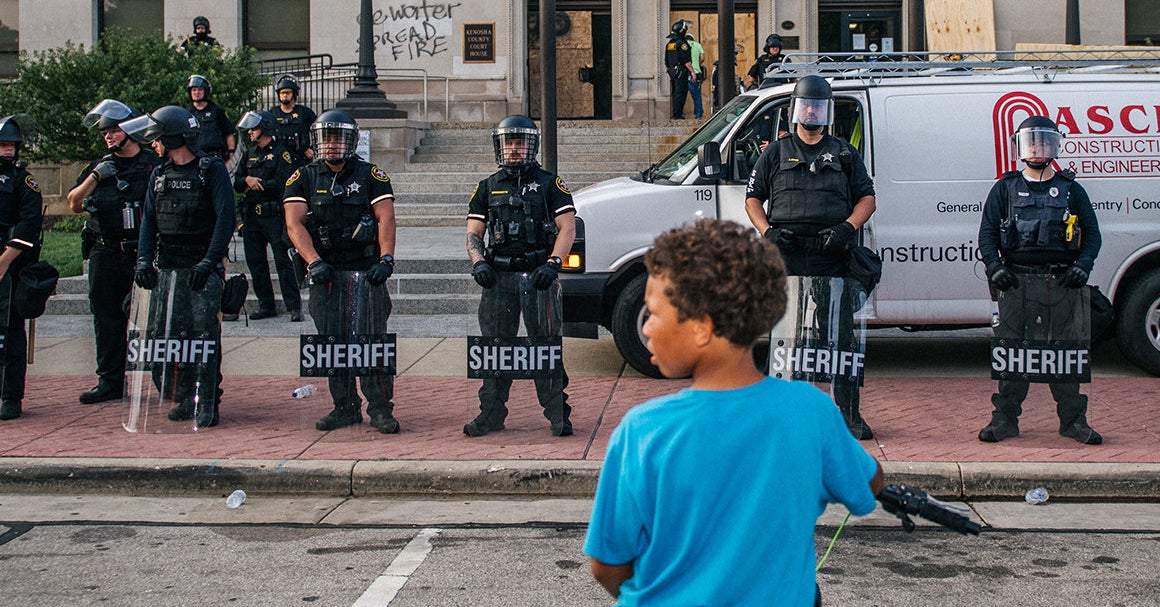 As President Donald Trump’s supporters stormed the Capitol on Wednesday, sparking chaos that ensued for hours and resulting in the death of at least one woman, many Black residents of Washington, DC, were left asking how, in one of the most policed cities in the country, had a group of mostly white insurrectionists been able to run free and bring American democracy to its knees.

“I’ve watched police pepper-spray children; I’ve watched [them] pepper-spray Karon Hylton‘s mom after she had just seen footage of them murdering her damn son,” said Toni Sanders, a DC resident who had spent much of this summer protesting at DC’s Black Lives Matter Plaza. “And you mean to tell me they can’t do anything, with all of the hundreds of thousands of dollars they spend on tear gas, to stop these terrorists from tearing up our city and terrorizing the Black and brown citizens of the city? This is crazy.”

This past summer saw violent clashes between police and Black Lives Matter activists in DC and in cities across the country in the wake of the police killings of George Floyd and Breonna Taylor. Videos of police tackling protesters and using chemical irritants like tear gas became commonplace. Most memorably, federal police used tear gas to clear peaceful protesters out of Lafayette Square outside the White House so the president could walk to St. John’s Church for a photo op with a Bible in hand.

“Right now, I’m just sitting here and I’m angry. I am legit furious,” Sanders said. “I am enraged by the light treatment that these terrorists are getting. They have guns. They have attacked the police. They have attacked innocent people who are just in the area, and yet they have not been beaten and teargassed and had flash-bangs thrown at them the way we had all summer long,” she said. “We didn’t have any weapons. All we had were our voices saying, ‘Black lives matter.'”

For many Black Lives Matter activists who have spent the last few years trying to shine a light on police misconduct, each image streaming out of the Capitol seemed to further confirm their suspicions that the mostly white Trump supporters were getting special treatment from the police. As looters ransacked the building, and congressional staffers and reporters hid, videos showed officers taking selfies with the insurrectionists and helping them down the Capitol stairs.

“I am deeply troubled by the double standard we saw in the federal response to this attack,” said Janeese Lewis George, a DC Council member, in a statement to BuzzFeed News. “We saw several federal law enforcement agencies crack down on nonviolent Black Lives Matter protesters with tear gas, flash bangs, and rubber bullets at Lafayette Square. Meanwhile, the violent extremists who rushed the Capitol today met little resistance.”

She added, “It is a disturbing contrast that we must reckon with once this crisis is over.”

During an afternoon press conference, Robert Contee, acting chief of DC’s Metropolitan Police Department, reported that his officers had made 13 arrests and recovered five weapons as of 5 p.m. local time, which was hours into the standoff. Capitol Police, which has over 2,000 officers and jurisdiction over the Capitol grounds itself, did not respond to BuzzFeed News’ request for comment about how many arrests, if any, its officers had made on Wednesday.

While DC has a number of police departments, each acting autonomously from one another, Sanders said that, in her experience, these jurisdictional concerns usually do not stop local officers from getting involved.

“This summer, they had Park Police, Capitol Police, Secret Service — every police in this district had attacked me at one point in time this summer. And now that these terrorists are here, you mean to tell me we don’t have anyone who can stop them?” Sanders said.

For weeks leading up to the coup attempt, Trump and his supporters had hyped up Jan. 6 — when Congress was set to count the votes from the Electoral College and certify President-elect Joe Biden’s victory — as the day of their last stand.

Anticipating trouble, Black Lives Matter DC put out a statement on Dec. 30, demanding that city officials step up measures to protect the capital city and its residents — demands they say went unheeded.

“We tried to warn the mayor and other elected officials, hotels and other businesses, and we demanded that our city and sacred Black spaces be protected,” a Black Lives Matter DC spokesperson said in a statement to BuzzFeed News. “Though we remain unsurprised, it should have never have gotten to this point.”

The spokesperson added, “White supremacists were emboldened and made to feel comfortable, confident and secure to come to our city and reign terror.”

Today, Sanders is angry with everyone who had sworn to protect DC residents, from Trump to Congress to Mayor Muriel Bowser to the police chief.

“I got my Black ass beat all summer long on Black Lives Matter Plaza by the police in the city that was the first to paint ‘Black Lives Matter’ on the streets, the first to name a street after it,” Sanders said, “and these white people are basically being welcomed with a red carpet for all of their terrorist actions.