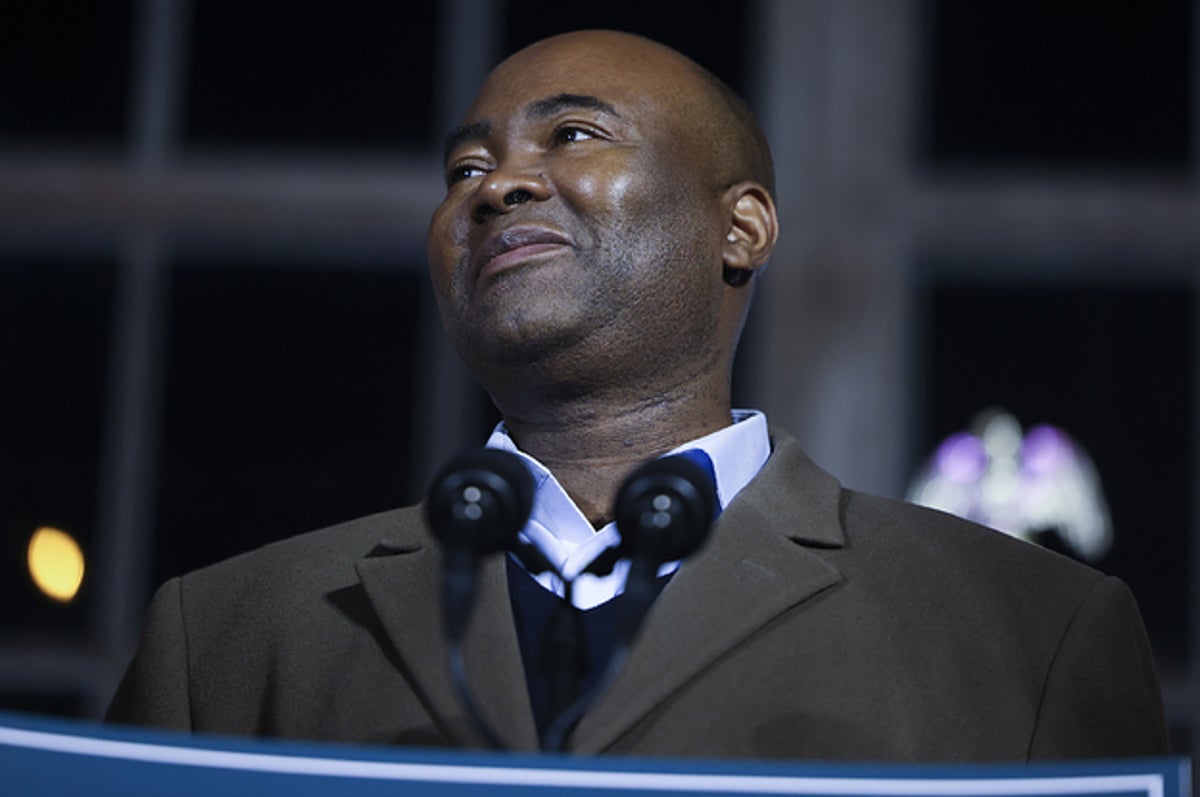 
Joe Biden has chosen Jaime Harrison to serve as the next chair of the Democratic Party, making the South Carolina Democrat the second Black man to assume the role following his 2020 bid for US Senate, a campaign that blew past fundraising records and became a national cause among liberals.

Harrison, 44, received and accepted the offer from Biden’s team on Thursday, according to three people informed of the decision. Biden’s choice is technically only a recommendation, along with a slate of other senior party officers, though it makes Harrison an almost certain lock for the role, pending a vote by members of the Democratic National Committee, scheduled to end on Jan. 21, the day after the inauguration.

Harrison will step into the role after the four-year tenure of Tom Perez, who beat Harrison and an array of other candidates, including Pete Buttigieg, for the top party job in 2017. Perez inherited the DNC at perhaps its lowest point in recent history: the staff’s morale was abysmal, the money was gone, and the party’s data and cybersecurity infrastructure was in disarray. “I mean, it was bankrupt,” Hillary Clinton said of the state of the party during her 2016 general election campaign against Donald Trump. “It was on the verge of insolvency. Its data was mediocre to poor, nonexistent, wrong. I had to inject money into it.”

Perez, the 59-year-old former labor secretary under President Barack Obama, went to work on building his vision of “The New DNC,” launching a public rebranding effort and an internal push to improve the culture inside the organization. The job of party chair can be a thankless one. Perez began his tenure with a weeklong “unity tour” alongside Bernie Sanders, remembered mostly for the way the crowds booed. Perez seemed to understand this as part of the gig. “You’re never gonna please everyone. And I’ve learned that very fast,” he said in an interview during the introductory tour. “I want to hear directly the frustrations of people who feel the party hasn’t met their expectations.”

But the job is also largely political, built around raising money and maintaining a complex web of relationships among divergent stakeholders, each with different aims, incentives, and expectations. His relationships with leaders of the Congressional Black Caucus and high-profile Black women in the Democratic Party were strained, with conflicts spilling into public view. Perez, who faced the additional challenge of navigating the unknown landscape of Trump’s presidency, had less political experience than most party chairs when he took the helm, and in the eyes of Democrats across the party, it showed.

Harrison, the former chair of the South Carolina Democratic Party who ran against Sen. Lindsey Graham last fall in a race that became the party’s most high-profile Senate campaign, brings a different network of relationships, including with Black party leaders. Harrison served as a top aide and the director of floor operations for House Majority Whip James Clyburn, another South Carolina Democrat who already holds power with Biden and the incoming administration.

“There were tensions between the state chairs and Chairman Perez,” said Jane Kleeb, the chair of the Nebraska Democratic Party. “That relationship got better over time. But it will start out as a good, positive relationship already now, because Jaime has been in our shoes and he understands that state chairs are the backbone of the party.”

Unlike Perez, Harrison will also run the party at a time of Democratic control, giving top White House officials a large share of control of the DNC, including giving Biden his choice of party leader. (The last time a Democratic president was entering his first term in this position, Barack Obama’s chose Virginia Sen. Tim Kaine in early 2009.) DNC members will still hold a vote to elect Harrison their chair on Jan. 21, and to fill vacancies for other officer positions, such as vice chair.

Two senior Democratic operatives with knowledge of Biden’s choice attributed the decision to Clyburn’s influence. The longtime congressman’s endorsement, delivered at a crucial time in the Democratic primary last year, helped Biden secure the vote in South Carolina and effectively initiated a process by which other candidates, including Buttigieg and Sen. Amy Klobuchar, dropped out of the race in quick succession, backing the former vice president against Bernie Sanders. Next to Harrison, few other names were ever in real contention, according to one of the senior Democrats, saying that when Clyburn speaks, “Biden listens.”

Over the last four years, Harrison has also been a loyal ally to Perez. Late in the DNC chair’s race in 2017, he made a deal with Perez, ending his campaign and encouraging his supporters to vote for the former labor secretary in exchange for a role as a senior counselor on how to best transform the DNC, as one person familiar with the alliance recalled the deal.

In the world of the DNC — an opinionated group of about 450 people where some squabble, complaint, or “open letter” is always making its way to the press — Harrison is a well-liked and uncontroversial figure. During his 2017 campaign for DNC chair, his record as a corporate lobbyist, including for clients such as the coal industry and Walmart, opened him up to light scrutiny among members on the left. But Harrison, who served as DNC associate chair and senior general counsel, has made allies across the party. In late December, dozens of DNC members circulated and signed a “draft letter” urging Biden to choose Harrison.

“During the campaign Jaime articulated an inspiring message; he demonstrated an exceptional fundraising ability; and as a DNC officer, he has a strategic knowledge of DNC internal operations,” DNC members wrote in the letter, adding that “obviously” they would support “whomever the Biden/Harris Administration recommends.”

The letter was signed largely by a more moderate wing of DNC members. Nina Turner, a top Sanders adviser who advocated for the interests of the left on the DNC’s “Unity Reform Commission” after the 2016 election, said she and other more progressive party leaders also have a good relationship with Harrison. “I truly hope he will use his experiences in running for the Senate and other leadership roles to bring the party together and seek understanding from the progressive wing — and not just a false unity, but to get at real unity.”

Harrison was born in Orangeburg, South Carolina, a small, rural town of 13,000 people and the site of civil rights violence in the ’60s. He grew up “dirt poor,” he’s said, raised largely by his grandparents after his mother moved to Atlanta to support the family. In his book, Climbing the Hill, Harris traces his entry into politics to Jesse Jackson’s 1988 convention speech. He stayed up late to watch — “inspiring stuff to a poor Black kid,” he writes in the book — and later joined the Young Democrats of South Carolina, volunteering for Bill Clinton’s 1992 presidential bid.

Some senior Democrats hope that Harrison would maneuver a politically complicated change in the order of the presidential primary calendar, replacing Iowa and New Hampshire, two predominantly white states that traditionally vote first and hold outsize sway in the nominating process. The third and fourth states in line, Nevada and Harrison’s home state of South Carolina, are far more diverse and were key to Biden’s eventual victory.

Despite the crucial role Black voters and activists play in Democratic politics, only two Black people have chaired the party before: Ron Brown and Donna Brazile, the latter of whom served twice in an acting capacity, once in 2011 and again in 2016, after Russian hacking of DNC emails revealed an internal bias against Sanders before the conclusion of that year’s presidential primary.

Harrison will take over the party apparatus at a turbulent time in the country, and in Washington. On Wednesday, DNC and Republican National Committee headquarters were evacuated after pipe bombs were placed there during the mob riot that overtook the US Capitol.

Last Friday, the RNC moved to reelect Ronna McDaniel as their chair, a position she held throughout Trump’s presidency.

The vote to elect Harrison and other DNC officers will conclude on Jan. 21, ahead of a virtual meeting of the DNC that afternoon.

On Monday night, DNC members received a copy of the rules of procedure for the vote. Candidates for national chair, including Harrison and any possible challengers, are required to file their candidacy by Thursday evening at 9 p.m. EST. To qualify for the ballot, they have until the following Monday morning to collect 40 signatures from DNC members, a newly increased threshold compared to the chair’s race in 2017.

Harrison will run as part of a slate of candidates selected by the Biden team, including for office-level positions such as vice chair, which are expected to be announced ahead of the filing deadline on Thursday night.

Biden transition officials have steered the selection process for DNC chair without much outreach to rank-and-file party members, according to interviews with Democrats over the last week, when there was a widely shared sense of confusion among DNC members, including incumbent officers who are hoping to serve another term, about Biden’s process.