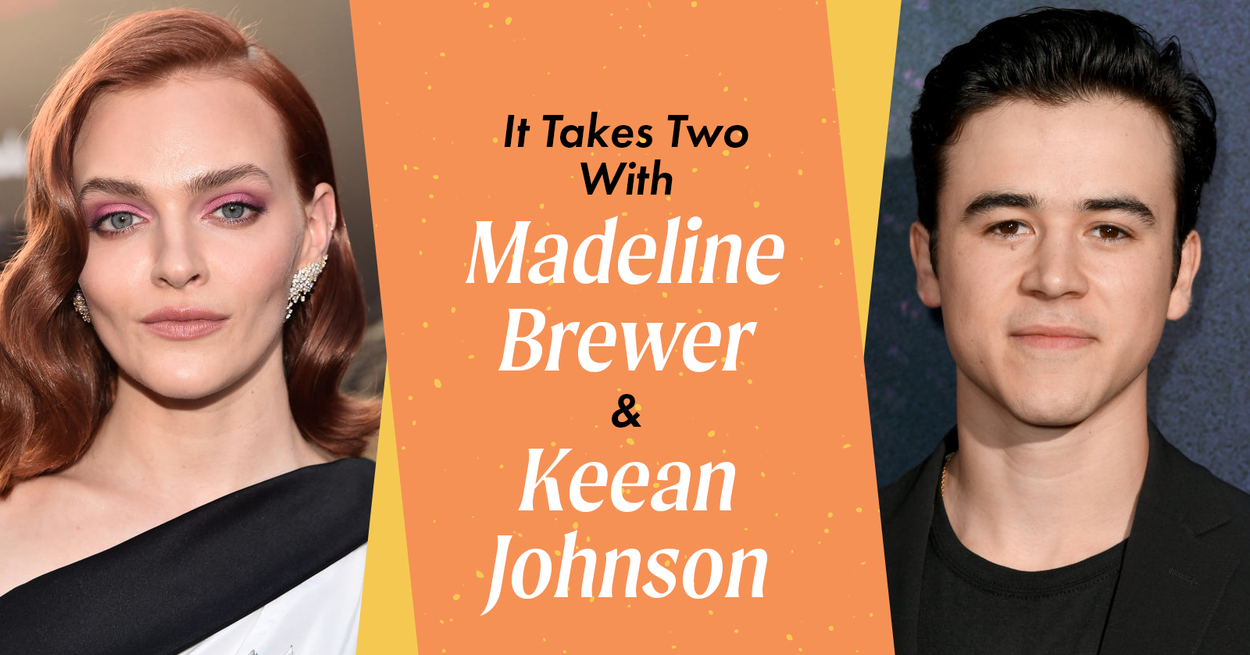 
Last week, we sat down the the stars of Hulu’s upcoming teen drama The Ultimate Playlist of Noise Keean Johnson and Madeline Brewer. In a ~fun twist~ of events, we had Keean and Maddie answer questions about EACH OTHER — like their first impression of one another, their favorite scenes to shoot with one another, and the ultimate playlist title they’d pick for one another. Here’s everything else we learned:

BEFORE we hop in, lemme give you a little synopsis of the film: Marcus (Keean Johnson) is an audiophile high school teen who finds out he has to undergo brain surgery that will permanently take away his hearing. So, before that happens, he embarks on a journey to record ~The Ultimate Playlist of Noise~ to document all of his favorite sounds while he can still listen. On his journey, he crosses paths with the mysterious Wendy (Madeline Brewer) who’s on her way to New York for a life-changing opportunity. Little do either of them know, this road trip is more than that — it’s a journey of self-discovery, sacrifice, heartbreak, and most importantly, acceptance.

1. What was your first impression of each other?

Maddie’s reaction when first asked about her initial impression of Keean:

Maddie: [Laughs] My first impression of Keean was that he looks younger than he his.
Keean: All my friends, when they found out I was doing this movie with [Maddie], were like, “Oh, shit! That’s that girl with the eyepatch from The Handmaid’s Tale! That’s so cool.” So, my first impression was that I was nervous ’cause I hadn’t seen the show yet and I felt REALLY bad. But, I was also intimidated, because, DAMN, she’s the one on Handmaid’s Tale.

2. What song would you choose to describe one another?

Maddie: Something by DMX or Childish Gambino. I can’t specifically pinpoint why that is…But it FEELS apropos.
Keean: All the song names I listen to are just…derogatory. So that’s not good OR fitting. Like, “Broke As Fuck”? “Have Mercy”? “Garbage”? That’s just disrespectful.

3. What was your favorite scene from The Ultimate Playlist of Noise to film with one other?

Maddie: I liked filming the scenes in New York City, that was fun.
Keean: And that wasn’t planned, either. It was supposed to be shot in Syracuse [where the rest of the film was shot], which is a really cute town, but it didn’t have the essence of NYC.
Maddie: It didn’t have ~Time Square energy~.
Keean: Exactly. So we all were just down to go down one day and do a hand-held day and it felt so guerrilla. But another fun scene was the escalator scene and the logistics behind it.
Maddie: Oh yeah! You were going down the up escalator and I was going up the down escalator.
Keean: Yeah, Maddie had the hard job. She was doing the stair-master.

4. What’s a fun or silly behind-the-scenes memory from shooting The Ultimate Playlist of Noise?

Maddie: I have this funny video on my phone of Keean eating street meat in NYC. It was like, he was about to take a bite of it and said, “Street meat!” It just always makes me laugh.
Keean: We were shooting the sprinkler scene in the roller rink and there was this very sweet extra, bless his heart, but when the rain started coming down, their direction was for everyone to run off, but this poor guy kept falling in the water and, for about 30 seconds, attempted to stand up. Lemme tell you, watching a man in skates trying to stand up in water and just failing miserably…[Laughs] people ended up having to drag him off the set.

5. If you had to create a playlist to describe one another, what you you call it?

6. What was your favorite sound you recorded in The Ultimate Playlist of Noise?

Maddie: I liked the butter getting spread on toast. That’s my favorite sound.
Keean: There was nothing cuter than the little kid I was recording playing with the velcro on his shoes. He was a little young, so he couldn’t quite understand if he was in a movie or not and was confused about the whole thing, but I loved that sound.

7. What surprising thing did you learn about your co-star that audiences would be surprised to learn too?

Maddie: Keean is a really great artist — like a painter. OH, also producing and sound-mixing. He’s a Renaissance man!
Keean: I can’t think of one that’d do you justice, Maddie. Don’t get me wrong, Maddie is a fascinating human being, but there are just way too many to choose from.
Writer’s note: Maddie TOO is a talented musician — she sings an original song in the film which you can listen to here!

8. Last, but not least, if you could only listen to one album for the rest of your life, which would you choose?

Maddie: I’m going to list two, because that’s just who I am. Ctrl by SZA and Alopecia by WHY?
Keean: Erik Satie’s entire discography.

Thanks so much for chatting with us, Maddie and Keean! Be sure to catch these two humans in The Ultimate Playlist of Noise, streaming exclusively on Hulu January 15.