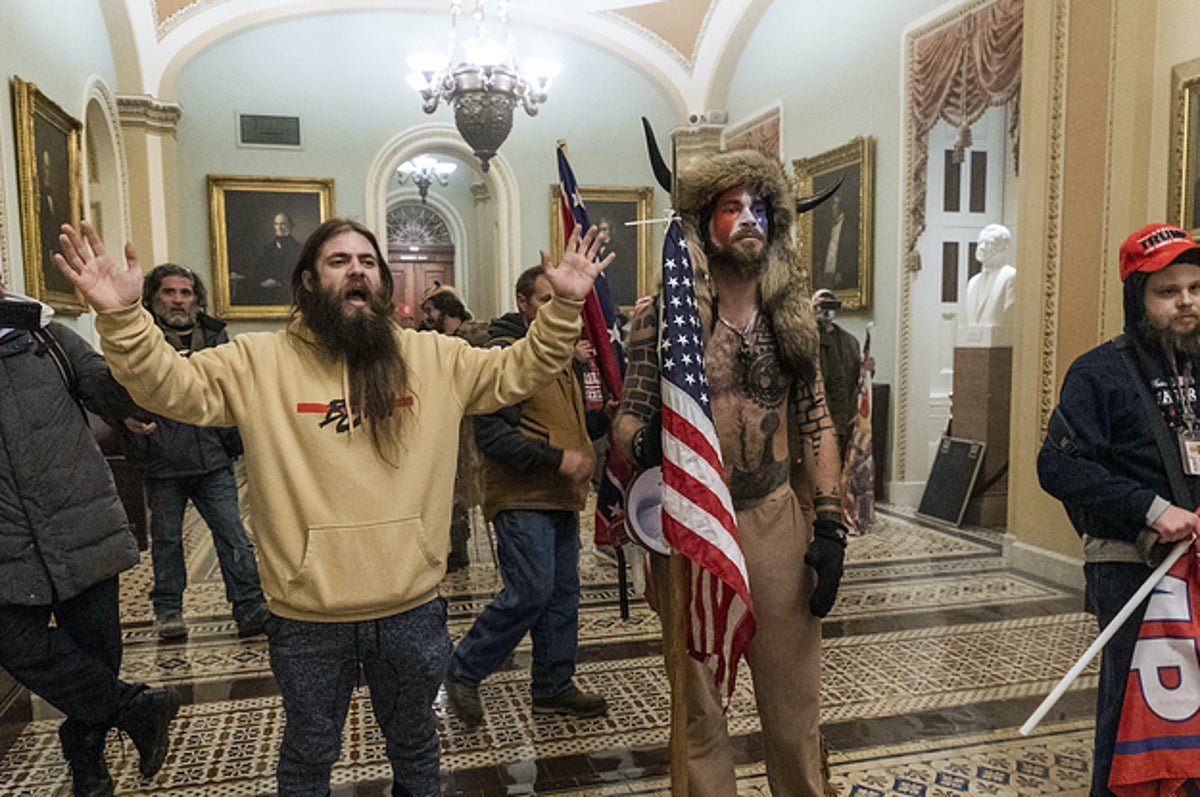 
WASHINGTON — Federal prosecutors shared new allegations of disturbing motivations for some of the pro-Trump insurrectionists who stormed the US Capitol last week, writing in a court filing that their plan was to “capture and assassinate elected officials.”

The government shared its latest assessment of the danger of the Jan. 6 attack in arguing to keep Jacob Chansley, the shirtless man seen wearing horns as he broke into the Senate chamber, in custody while his case is pending. The Arizona man is a believer of the QAnon mass delusion and is well known in those circles as the “QAnon shaman.” Prosecutors wrote that Chansley was “an active participant in — and has made himself the most prominent symbol of — a violent insurrection that attempted to overthrow the United States Government.”

According to the government’s memo, after Chansley and others breached the Capitol building and the Senate chamber, Chansley — who was carrying what prosecutors described as a spear with an American flag tied below the blade — left a note on the Senate dais that stated, “it’s only a matter of time, justice is coming.” Vice President Mike Pence had been standing at that dais shortly before the attack, presiding over Congress’s final certification of the election results and President-elect Joe Biden’s win over President Donald Trump. Chansley allegedly told investigators that the note wasn’t meant as a threat, but prosecutors told the court that they “strongly” disagreed.

“Chansley acted on conspiracy theories he has repeatedly espoused in becoming one of the highest-profile members of a group that attacked a Congressional proceeding, and nothing suggests he has learned from that experience so as to avoid it if on pre-trial release. The nature and circumstances of his offense are grave, and cannot be mitigated by conditions of release,” prosecutors wrote.

The government also said that Chansley had expressed interest in going back to Washington for Biden’s inauguration on Jan. 20. Prosecutors argued that Chansley was a flight risk, in part because he’d become so “strongly associated” with his costume that he was “virtually unidentifiable” when he didn’t wear it.

Chansley, also known as Jake Angeli, was taken into custody on Jan. 9. He’s charged with knowingly entering or remaining in any restricted building or grounds without lawful authority, and with violent entry and disorderly conduct on Capitol grounds. A federal magistrate judge is scheduled to hear arguments on whether to keep Chansley behind bars on Friday afternoon.

Chansley is one of more than 40 people whose arrests on federal charges in connection with the Capitol insurrection are public to date; the US attorney’s office in Washington, DC, which is leading the federal prosecution effort, is expected to announce many more cases in the coming days.

Some judges have agreed to release defendants charged in connection with last week’s violence while their cases are pending, but others have not. On Thursday, a federal magistrate judge in Texas agreed to release a retired Air Force officer who was photographed carrying zip-tie handcuffs into the Capitol; prosecutors had argued to keep him in custody, saying there was evidence he planned to “kidnap, restrain, perhaps try, perhaps execute members of the U.S. government,” according to an Associated Press report.

Other defendants granted temporary release so far include a man photographed carrying Pelosi’s lectern (her office said it never left the building), a newly elected member of the West Virginia House of Delegates who was recorded on video as he entered the Capitol shouting “We’re in, we’re in!”, and a man who allegedly repeatedly punched a US Capitol Police officer. Judges are imposing travel restrictions on people they’ve allowed to go free for now.

In DC, meanwhile, a federal magistrate judge yesterday sided with the government in denying release to a man charged with threatening to kill House Speaker Nancy Pelosi in text messages and bringing multiple firearms and ammunition to Washington; the man had planned to participate in the Capitol assault but arrived too late because of trouble with his truck, according to prosecutors.