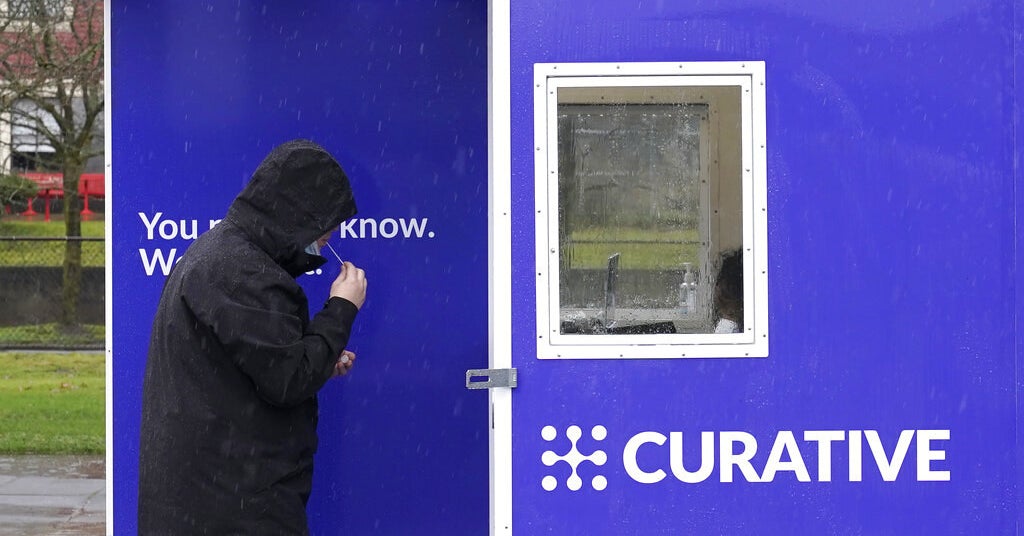 
In less than a year, the startup Curative has gone from barely existing to being one of the biggest coronavirus testing providers in the United States.

The Southern California company claims to have processed more than 13 million tests, or 10% of all tests nationwide. It rose to prominence by promising “fast, simple, painless” spit tests that are self-administered.

But last week, the FDA warned that Curative’s tests run “the risk of false results, particularly false negative results.” It cautioned that its tests should only be administered to people with COVID-19 symptoms and under the supervision of healthcare workers.

The FDA alert set off panic and confusion, prompting some of Curative’s clients to reconsider using the test. Los Angeles County, where a surging caseload is crushing hospitals, broke ties with the company. On Capitol Hill, where members of Congress and staffers regularly take Curative tests, federal health officials are exploring alternatives. In the Bay Area, San Francisco’s school district and Sonoma County are walking away from pilot programs.

But other major municipalities told BuzzFeed News that they will keep using or directing people to Curative sites, and are still doing so without requiring that people have symptoms. The US Air Force, which has a $42 million deal with Curative, said that it was “carefully considering” the FDA notice but said that the test has helped prevent outbreaks. Still other regions are inking new deals with the company.

Testing experts told BuzzFeed News that the FDA notice — and Curative’s response — raised more questions than answers about a widely used testing service, at a time when a more contagious version of the virus is increasing the urgent need for fast, accurate diagnoses.

The FDA’s alert didn’t reveal any information about the tests that wasn’t already publicly available, nor did it explain what prompted the warning. Meanwhile, Curative’s CEO, Fred Turner, has said he remains “confident” in the accuracy of the tests, but the company has issued vague and misleading statements in its defense, outside experts say.

“I can’t judge how serious a problem this is because they’re not giving any specifics,” said Susan Butler-Wu, an associate professor of clinical pathology at the University of Southern California’s Keck School of Medicine, of the FDA’s safety communication.

Here’s what’s known about Curative’s test, and the potential problems, so far:

For Curative, the pandemic has meant booming business.

Curative is the latest in a string of enterprises founded by the 25-year-old Turner, who dropped out of a biochemistry program at Oxford University in 2016, moved to California, and joined Y Combinator, the famed Silicon Valley startup incubator.

The premise of his first venture, TL Biolabs, was to sell genomic data about cows to their farmers. When demand failed to materialize, he launched Shield Bio, a lab-testing business with a focus on infectious diseases. That didn’t pan out, either. In January 2020, he cofounded Curative to test for sepsis, a dangerous blood infection.

By March, it was becoming clear that the coronavirus was a problem and that the US was woefully unprepared to detect it. So in April, Curative secured an emergency use authorization from the FDA to do SARS-CoV-2 testing, an expedited form of approval from the agency that requires less data.

Its three labs, in San Dimas, California, Washington, DC, and outside Austin, Texas, now process about 1 million tests a week from what the company says are 10,000-plus testing sites. Curative, which is headquartered in San Dimas, now has more than 4,000 employees. “The scale is just crazy at this point,” Turner told the Los Angeles Business Journal this month.

As of Friday, Curative had partnerships with at least six states, four cities, one county, a hotel chain, and the Department of Defense, according to the company.

“They came along and were able to provide the service — kudos to them for doing so,” she said. “Because who else was going to fill that gap?”

The FDA only authorized Curative’s spit test for a specific group: symptomatic people under medical supervision.

Curative performs PCR tests, or molecular tests that detect the genetic material of the virus, which are generally much more accurate than rapid antigen tests. The company is authorized to test a few kinds of samples, including from the nasopharynx — the infamous deep nose swabs — and the front of the nose.

But Curative’s main test uses saliva samples. At its drive-through and walk-on testing sites, people are instructed to cough and swish spit around their mouths, run a swab around their cheeks, gums, and tongue, and return it in a baggie. Healthcare workers are on hand to supervise the testing, the company has said.

Nasopharyngeal tests are generally considered to be the gold standard in accuracy. Some studies, though, suggest that front-of-nose and saliva swabs can still be sufficiently accurate, and they also have the advantage of being much easier to collect.

“Nasopharyngeal is number one and others are number two until proven otherwise,” said Ramy Arnaout, a pathologist at Beth Israel Deaconess Medical Center.

On its website, Curative claims that its saliva test is 90% accurate at identifying positive cases — meaning 10% will falsely be identified as negative — and 100% accurate at spotting negative ones.

According to more detailed data it submitted to the FDA, the tests performed very well, but only under specific circumstances. In 52 symptomatic people who collected their saliva sample under a healthcare worker’s supervision, the test correctly detected all the positive and negative cases, a finding backed up by a second study.

But in situations with more room for error, the data was less reassuring. In 20 people who were symptomatic but administered the test unsupervised, the saliva test correctly detected only 75% of the positive cases.

The test fared even worse overall in asymptomatic people who were unsupervised: It accurately detected 82% of 17 negative cases, and caught none of the 3 positive cases. “That’s bad,” said Geoffrey Baird, a pathologist at the University of Washington School of Medicine.

In its safety communication last week, the FDA restated the terms under which the test was authorized: Nasal and saliva tests should be limited to people with symptoms, and all self-administered tests should be given under medical supervision.

Negative results from the spit tests in particular, the agency added, should be double-checked by testing a different kind of sample.

Curative has administered more than 13 million saliva tests, according to the company.

But Curative is testing people without symptoms, which could be producing false negative results nationwide.

Some municipalities, like San Mateo County in Silicon Valley, specify that the spit tests should be reserved for people with symptoms, while others — including Seattle, Houston, and the city of Los Angeles — direct people to sign up for tests on Curative’s site even if they do not have symptoms. Once on the company’s website, people can report having no symptoms and still register for a test in multiple cities.

In the city of Los Angeles, Mayor Eric Garcetti has explicitly acknowledged that tens of thousands of asymptomatic residents are getting tested by Curative.

“Ninety-two thousand people — a full third of all the positives we have gotten — have been from asymptomatic people,” he said at a briefing last week.

Used incorrectly, Garcetti admitted, the tests “may sometimes not catch all the positives.” “But that’s not unique to this test. … In terms of controlling this, I’d rather have more information than eliminate it altogether,” he said.

Asked how it ensures accurate results for asymptomatic people who self-administer the spit tests, a Curative spokesperson said, “When Curative’s oral fluid PCR test is used according to instructions and as directed by a health care worker, patients will receive high quality results.”

In the absence of a more definitive warning from the FDA, many cities are sticking with Curative for now. Kamaria Hightower, a spokesperson for the mayor of Seattle, observed that no test is perfect.

“A test not done at all has a zero percent chance of finding the COVID-19 virus,” Hightower said by email.

Curative claims the FDA’s warning was prompted by new data that the company submitted.

Curative is now trying to submit new data that makes the case that its test can work in the scenarios where it performed relatively poorly earlier. Jeffrey Klausner, its acting medical director, said in an interview that the company recently studied how the tests performed in asymptomatic people with no known exposure and people who collected their samples unsupervised. The company submitted the 1,300-person study, which examined “a variety of different specimen tests” to the FDA a couple of weeks ago, Klausner said.

The FDA notice “has nothing to do with the current test,” Klausner said, acknowledging that it “has clearly caused some confusion.” “It’s been authorized, it’s been performing extremely well.”

The day after the FDA’s notice, a Curative executive sent a letter to its clients informing them of the study’s existence, saying the alert was “due to FDA questions about the study design for these additional data.”

Both parties declined to release the new data, but some signs suggest it was unsatisfactory.

Los Angeles County initially allowed Curative to be used at pop-up testing sites that launched in mid-December, based on a review of its publicly available data. But its health services department said that over the last week, “after receiving the FDA alert and reviewing the data that prompted the alert,” it would discontinue the tests, according to a statement sent to BuzzFeed News. That stance diverges from that of the city of Los Angeles, which is still offering Curative tests.

Nathan Cortez, an FDA legal expert at Southern Methodist University in Texas, said that companies frequently study products for “off-label” uses with the goal of seeking permission to make more expansive marketing claims. “It strikes me as the responsible thing to do to run clinical trials to see if Curative’s test is safe and effective in asymptomatic people,” he wrote.

But it would cross a line, he added, if it promoted its test as effective in circumstances that it didn’t have the data to back up.

Given the confusion whipped up by the FDA notice, Baird called on Curative to release its new data and set the record straight.

“If Curative stands to be part of our back to work, back to school, back to whatever,” he said, “we should understand how the test works.”

Curative is pushing back against the FDA’s warning, but scientists say that at least one of its defenses is misleading.

Curative has asserted that nothing about its test’s accuracy or performance has changed. It’s also pushed back against the suggestion that its test produces more false negatives.

“Testing sensitivity and accuracy on behalf of our patients is at the heart of our work,” Turner said in a statement.

On Jan. 8, Turner tweeted a graph comparing two sets of average percentages of positive results: one found by Curative’s tests, the other reported for all tests in California.

A Curative spokesperson said that the graph showed that “Curative’s positivity rate largely agrees with other labs,” and Klausner said in a message that it would “suggest there is no problem whatsoever with the current Curative test.”

But outside experts said the graph was misleading. The people tested by Curative are not necessarily representative of all Californians getting tested, so comparing the portion of infections in the two groups doesn’t prove anything about the rate of false negatives from Curative’s test, they said.

“Without telling you who these people are, I think this plot is entirely meaningless in and of itself,” Baird said.

“I don’t know what you can infer from it,” Butler-Wu said.

In response, a Curative spokesperson said that the company tests “a fairly representative sample” of Californians.

This story has been updated to clarify how accurate Curative claims its saliva test is at identifying positive and negative cases.