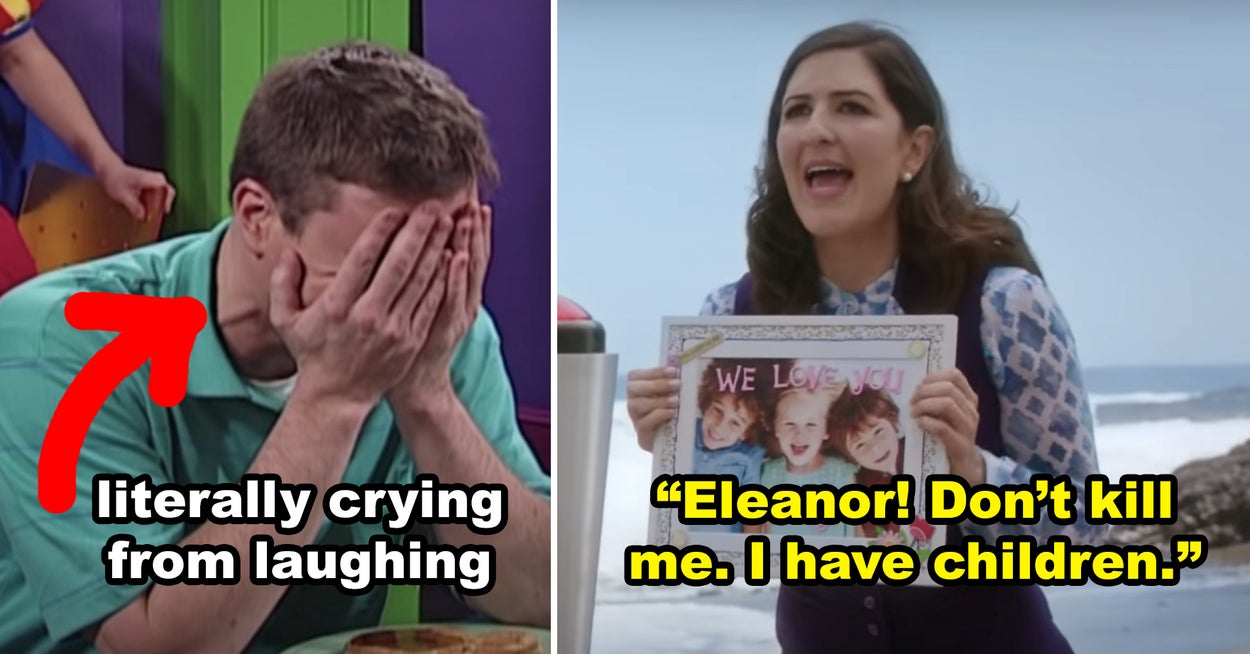 We asked members of the BuzzFeed Community to tell us which TV scenes never fail to make them laugh. Here are the hilarious results.

On The Good Place, when Chidi and Eleanor tried to murder Janet, but she was programmed to beg for her life whenever someone tried to reboot her.

On Roseanne, when Jackie had to call her elderly aunt to let her know about a death in the family, but her aunt couldn’t hear a word she was saying.

On Brooklyn Nine-Nine, when Jake forgot he was looking for a murderer and made all of the suspects sing “I Want It That Way” by the Backstreet Boys.

On Living Single, when Max wanted to get a giant panther tattoo, but Regine tried to talk her out of it.

On I Love Lucy, when Lucy and Ethel had to wrap candy in the chocolate factory, but the conveyor belt was simply too fast.

On The Cosby Show, when Sondra said she was dropping out of law school to help Elvin open a wilderness store, but Clair wasn’t having any of it.

On Parks and Recreation, when Leslie had to give a speech at the hockey rink, but everyone kept slipping on the ice on their way to the podium.

On Schitt’s Creek, when Moira thought she killed someone, so she talked to David about it and accidentally made him an accomplice.

On Unbreakable Kimmy Schmidt, when Titus thought his boyfriend was cheating on him, so he walked through the street like he was Beyoncé in her “Hold Up” music video.

On Veep, when everyone had to testify in front of Congress, and they read every insult Selina’s team made about Jonah in their “Jonad Files.”

On Bob’s Burgers, when Bob let Tina practice driving in the empty parking lot, and she somehow crashed into the only other car that was there.

On 30 Rock, when Liz tried to get out of jury duty by dressing up as Princess Leia and using a fake voice, but the bailiff wasn’t having any of it.

On The Golden Girls, when Rose told everyone about the Great Herring War, but no one could keep it together.

On Community, when Annie chloroformed the janitor in order to help Troy and Abed escape, but evvvvverything backfired.

On Friends, when Ross, Chandler, and Rachel tried to carry a new couch up the stairs, but they kept getting stuck.

On New Girl, when everyone helped Winston realize that he’s colorblind, and his whole life finally started to make sense.

On Seinfeld, when George pretended to be a marine biologist and removed a golf ball from a whale’s blowhole, which was accidentally shot in there by Kramer.

On Psych, when Gus tried to extract the note from his boss’s dead body without leaving any evidence behind, but he failed miserably.

On The Big Bang Theory, when Sheldon tried to hide from Leonard in the ball pit.

On The Office, when everyone had to go through CPR training, but it somehow turned into a dance party.

On The IT Crowd, when Douglas made the most awkward and unbelievable entrance at his father’s funeral.

On The Mary Tyler Moore Show, when Mary couldn’t stop laughing during the funeral for Chuckles the Clown.

On Fleabag, when Claire’s coworker walked into the elevator right after Fleabag farted, and she commented on the scent.

On Martin, when Martin tried to find out who stole his CD player and used a stuffed animal to intimidate the suspects.

On Frasier, when Niles tried to iron his pants but kept fainting at the sight of blood, and the whole apartment caught on fire.

On The Carol Burnett Show, when Tim Conway played a dentist and kept accidentally injecting himself with novocaine, making his limbs go numb.

On Will & Grace, when Jack got extreme paralysis after putting too much numbing cream on his hands and face, and Will tricked him into thinking the only solution was to eat a banana.

On WKRP in Cincinnati, when Les reported live on the streets as turkeys were thrown from a helicopter to promote a Thanksgiving Day sale.

On It’s Always Sunny in Philadelphia, when Dennis and Mac tried to help Charlie make a dating profile, but there was absolutely nothing redeeming about him to highlight.

On The West Wing, when Josh and C.J. learned that the illustration of the world map was factually incorrect, and they had no idea how to process that info.

On The Fresh Prince, when Will accidentally walked in on his mom and Lisa’s dad in bed together.

And on Saturday Night Live, when everyone laughed so hard that they started crying during the iconic “Debbie Downer at Disney World” sketch.

Did your favorite scene not make the list? Use the comments below to tell us which TV moment you think is the funniest of all time!