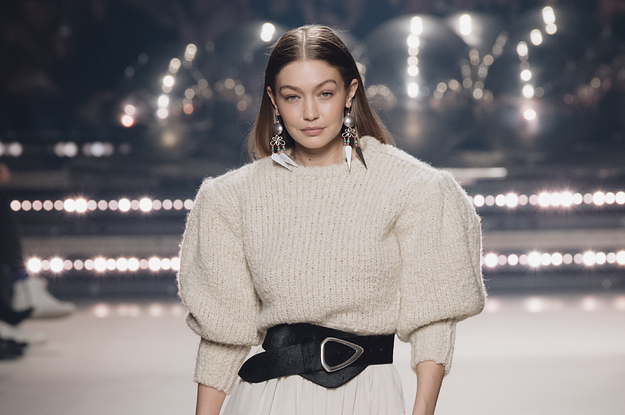 In September of last year, Gigi Hadid and Zayn Malik welcomed their first child into the world.

Up to this point, we haven’t learned much about their child — not even her name.

But Hadid recently responded to a Twitter user to give details on when she first found out she was pregnant, after posting a picture of herself walking the Jaquemus runway during Paris Fashion Week last year with the caption “My baby girl 🥜 was in there 🥺✨.”

“Yes, I found out the day before the Tom Ford show,” she replied, revealing that she already knew she was pregnant when she was walking the runway during Paris Fashion Week last year.

“I was so nauseous backstage,” she continued, “but I learned I could kinda control it if I continuously ate, so my mom would pack me snacks before each show.”

What was on the menu? Hadid specified that her cravings came in waves, and included everything from bagels and brownies to ribs and fries.

Hadid also noted that she had to improvise abroad when it came to bagel cravings — although the alternative certainly sounds like it was delicious, too.

Although Hadid remained fairly private when it came to details throughout most of her pregnancy, she’s recently been opening up more about the experience pre-and-post birth.

Last month, she shared photos of her daughter’s nursery while revealing that decorating the space “really helped me feel prepared when I would get too in my head.”

Hadid also recently shared a photo of her baby’s “first snow” — and who knows what milestones she’ll share with us in the future, too.