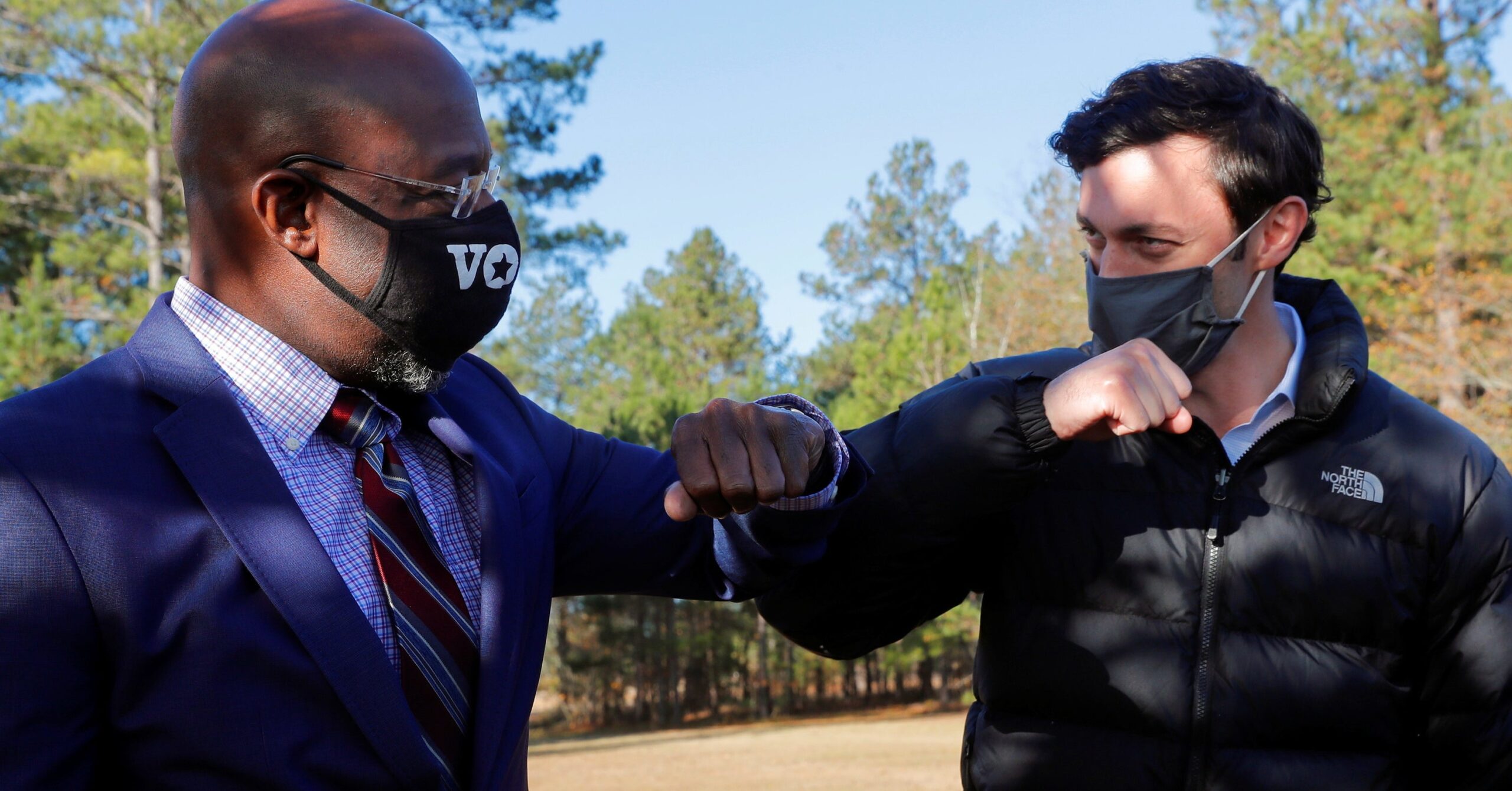 WASHINGTON — Three new Democratic senators were sworn in following the inauguration of President Joe Biden Wednesday, taking control of the Senate away from Mitch McConnell after six years.

The election of Sens. Jon Ossoff and Raphael Warnock of Georgia and the appointment of Sen. Alex Padilla of California — who will serve out the remaining two years of Vice President Kamala Harris’s Senate term — give Democrats 50 seats. As vice president, Harris is now the president of the Senate and has the ability to cast a tiebreaking vote in the chamber, giving Democrats control. She swore in the new lawmakers a few hours after taking her own oath of office Wednesday. Harris laughed as she read her own name in announcing that Padilla would be taking her seat.

Democratic Sen. Chuck Schumer will now take over the Senate as majority leader.

“America is turning over a new leaf. We are turning the page on the last four years and to reunite the country, defeat COVID-19, rush economic relief to the people,” Ossoff told Capitol Hill reporters Wednesday morning while attending the inauguration. “That’s what they sent us here to do. And, you know, Georgia has sent a young Jewish man and a Black pastor to represent our state in the US Senate. It’s a sign of generational and epochal change for our state.”

Harris also swore in Sen. Pat Leahy of Vermont as the Senate president pro tempore, a position that is third in the line of succession to the presidency and is historically given to the longest-serving member of the majority party. Leahy takes the position from Republican Sen. Chuck Grassley

Now, he’s lost his job. With Democrats in control of the chamber, McConnell will be the minority leader, and now Schumer will lead the majority and take control of what legislation makes it to the Senate floor.

While he didn’t call-out McConnell by name, Schumer said that in his first speech as the head of the chamber that the Senate will now “do business differently. The Senate will address the challenges our country faces head-on and without delay, not with timid solutions, but with boldness and with courage.”

Schumer said the Democratic Senate would work to address the coronavirus pandemic, racial and economic justice, and “the greatest threat to this country and this planet, climate change.”

Schumer has said previously his first priority as leader will be $1,400 coronavirus stimulus checks. “It’s one of the first things we want to do once our new senators are seated. They campaigned on it,” he said at a press conference earlier this month. (Both Ossoff and Warnock campaigned on giving Americans a second round of $2,000 stimulus checks; with the $600 checks Congress passed at the end of December, Democrats want to quickly pass another $1,400).

Schumer has also said he plans to prioritize vaccine development.

“We have an opportunity to work with our House colleagues and a new administration to defeat the virus, provide the relief the American people need, and reunite the country,” he said in a recent statement.

Despite Democrats having tiebreaking power, however, Republicans will still retain some measure of power in the Senate, due in large part to the filibuster rule, which allows any single member to block a vote unless 60 senators vote to close the debate. Some Democrats have expressed support for eliminating the filibuster, but the entire party would need to vote together to do so and Sen. Joe Manchin of West Virginia has said repeatedly he does not support undoing the filibuster. During negotiations with Schumer about how to handle the evenly split Senate, McConnell has dug in to defend the rule.

“McConnell expressed his long-held view that the crucial, longstanding, and bipartisan Senate rules concerning the legislative filibuster remain intact, specifically during the power share for the next two years,” McConnell’s spokesperson Doug Andres said in a statement after the two party leaders met earlier this week. “Discussions on all aspects of the power-sharing agreement will continue over the next several days.”

In addition to filling Biden’s Cabinet and addressing the issues Democrats hope to tackle, the Senate will also have to conduct an impeachment trial in the early days of the new administration, following Trump’s second impeachment just one week ago.

Ten House Republicans joined with Democrats to vote to impeach the former president, charging Trump with inciting insurrection following the mob riot at the Capitol two weeks ago. It was the most bipartisan impeachment in history, Trump — who was just the third president ever to be impeached — became the first president to be impeached twice.

During the first impeachment, and almost relentlessly throughout his presidency, McConnell defended Trump at every turn. But, now that Trump is no longer in power, his tune seems to have begun to change, as the New York Times reported earlier this month that he has privately said Trump committed impeachable offenses.

In an interview with the New York Times this week, Padilla listed “increasing access to health care, combating climate change, a comprehensive immigration reform, [and] closing the education gap” as among the big issues Democrats will have to combat as the 117th Congress gets underway.

“Here’s what breaks my heart,” Padilla told the paper. “You know you catch the morning news and hear about record Dow Jones. But if you go to the COVID testing sites or the food banks, you see longer and longer lines. That contrast is heartbreaking.”