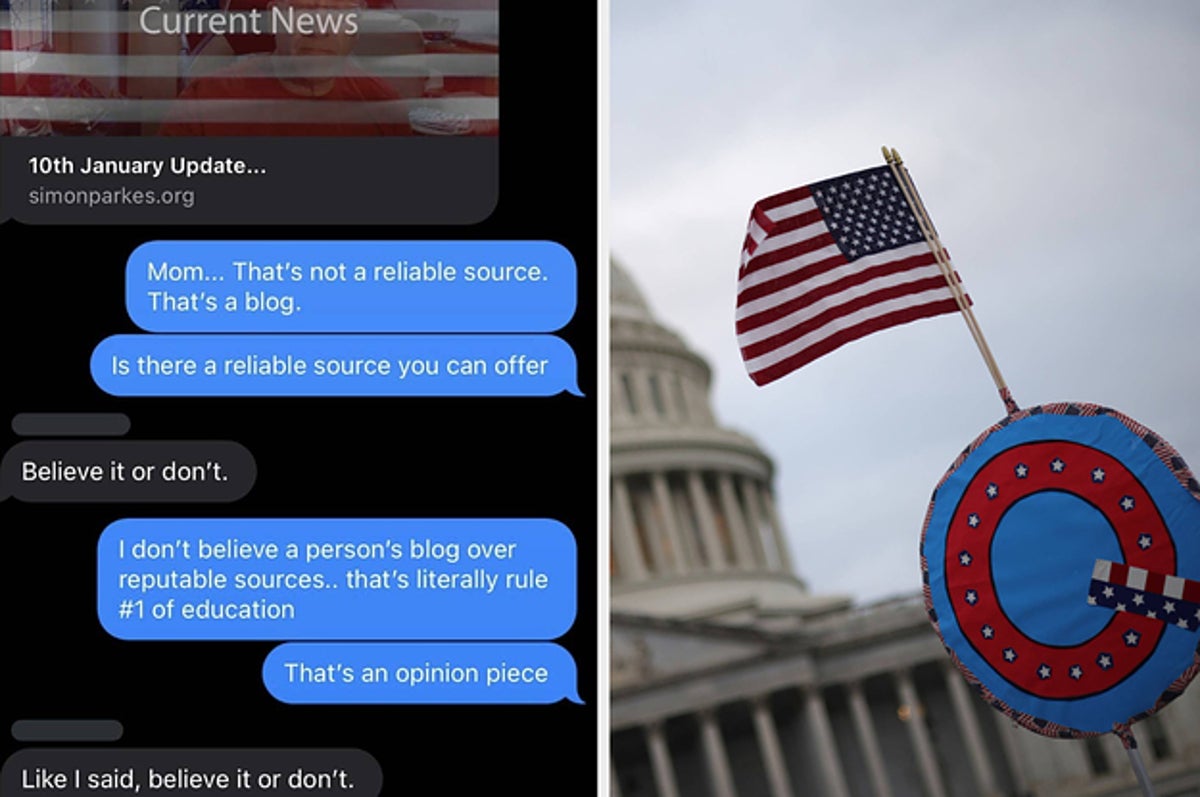 Lauren couldn’t help but feel relieved as she scrolled through frantic text messages posted on Twitter last week showing paranoid family members pleading with their loved ones to stock up on food and gas and take money out of the bank.

“I was like, I’m so glad that it’s not just me,” the 27-year-old told BuzzFeed News Tuesday. “To see that there’s so many other people whose parents are falling for the same trap … was comforting, but more than that it was deeply disturbing and disconcerting.”

In a now viral thread, dozens of people have shared screenshots of exchanges with their parents and other family members pushing mass delusions spread by QAnon accounts and other lies about the 2020 election, the coronavirus, and the Jan. 6 attack on the US Capitol, saying they find solace in the fact that they’re not alone in watching their loved ones spiral.

“Hi is this the support groups for people whose parents have lost their minds?” joked user @mbilik_.

Three people who spoke to BuzzFeed News about the texts they shared said they weren’t sure whether their loved ones embrace QAnon, the collective delusion based on the lie that President Donald Trump is fighting a Satanic deep state cabal led by prominent Democrats, or are just susceptible to online disinformation.

Still, seeing their parents and so many others believe wholeheartedly in the ridiculous ideas promoted by supporters of the mass delusion is worrisome enough, with QAnon supporters engaging in violence and other crimes. Several prominent followers were among the mob that stormed the Capitol earlier this month.

“It would be funny if it wasn’t so scary and it wasn’t so concerning that so many people actually believe that the world is this way,” said Lauren, who shared messages she recently received from a relative who believes the government has been interfering with their internet service. She asked to only be identified by her first name and not specify her relationship to protect it.

In a recent exchange, Alissa’s mom warned her and her brother about a widespread blackout coming, a conspiracy theory that QAnon accounts have long foreboded as a harbinger of mass arrests of government officials, according to NBC News.

“Something might be going down,” her mom said in a text. “Make sure your cars are gassed up, have plenty of food and drinking water. You can always fill up the bathtub for flushing the toilet. Also have cash on hand. We may not be able to communicate if there is a blackout.”

“Top government people might be arrested soon,” she continued. “If it happens the power and or communication might go down.”

The warnings of a government-initiated blackout appeared in many of the text exchanges added to the Twitter thread, baffling their recipients.

“Why would there be no power,” one person asked in messages shared by user @laceface9.

“Martial law is coming. There is no stopping it,” their mother responded.

“Oh i thought you meant there might be bad weather lol,” they said.

After Alissa prodded her mom for more information and a source for the warning, she sent her a link to a video posted to a blog that perpetuates conspiracy theories.

“Believe it or don’t” her mom responded.

It’s a refrain often used by Lauren’s relative, too.

She tries to challenge them, but they don’t listen.

“[They] for sure think that I’m mistaken and I’m a victim of government brain washing,” she added.

Alissa, who asked that her last name not be published to protect her family’s privacy, said she doesn’t think her mom is a conspiracy theorist, rather she’s just been overexposed to information that she never learned how to fact check.

“It’s almost like a cancer for that generation,” Alissa said. “There’s this plethora of information that they have at their fingertips, but they weren’t trained necessarily like millennials and Gen Z’ers where to filter and eliminate sources that aren’t reliable.”

For many families, the false information has strained relationships with loved ones.

Jo, who asked to go by her middle name, told BuzzFeed News her mom used to tell her “do not believe everything you read on the internet” and made sure she got her flu vaccines growing up. Now, her mom is the one falling for online disinformation and telling her daughter not to get vaccinated against COVID-19.

“So everyone’s parents became major conspiracy theorist this year,” she tweeted with a screenshot of her exchange with her mother.

Jo said her mom started hanging out with new people who were “all about” a wide range of conspiracy theories from the COVID-19 vaccine being “chipped so the government can track us to the world was supposed to end like three weeks ago.”

Now, she rarely responds to her mom’s messages. And at some point last year Jo had to tell her mother she couldn’t visit her and her baby anymore because she refused to wear a mask.

“I can’t believe how much she’s changed,” Jo said.

For Lauren, it’s gotten to a point where she’s had to ignore the part of her family member who believes in the conspiracies and delusions in order to keep their interactions civil.

“I’m deeply disturbed by some of the stuff that [they’ve] sent, that [they’ve] posted, that [they’ve] believed in,” Lauren said, adding that her family member was recently put in “Facebook jail” for “saying some horrible shit about Nancy Pelosi.”

She continues to talk to them ,but no longer follows them on the social media platform.

“I’d rather not know, honestly, at this point,” she said. “It’s put a huge space in between us.”

Still, Lauren holds out hope that someday she can shake them out of it.