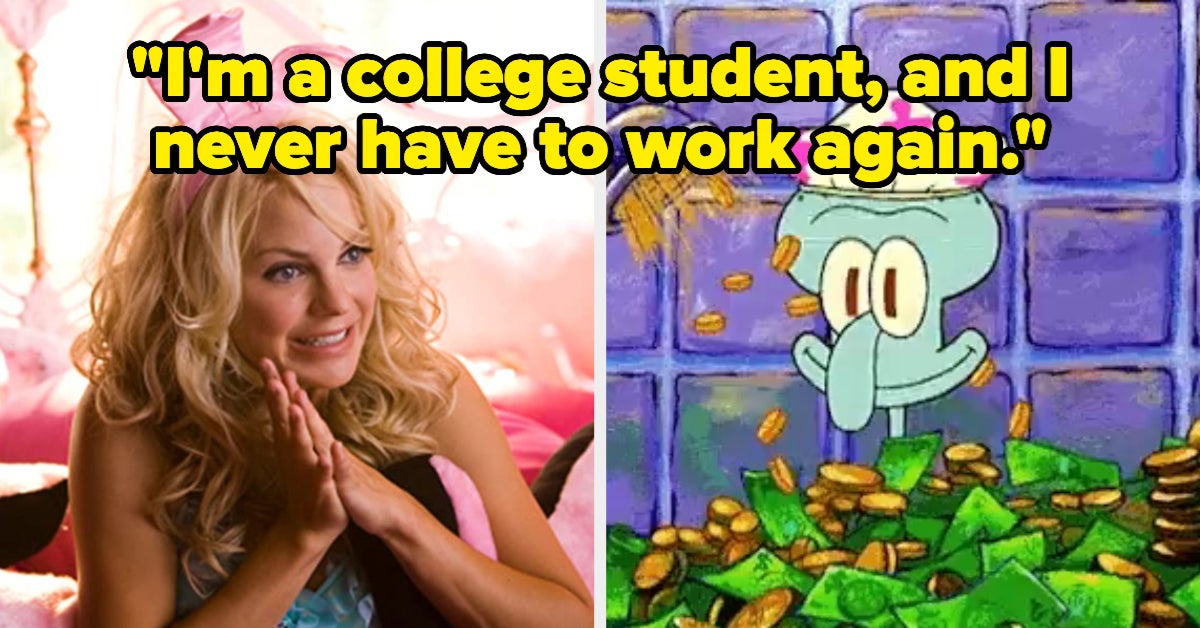 We’ve thankfully entered a period where professions that were previously viewed as shameful — such as sex work — are now openly discussed, and even perceived as empowering. For example, I’ve seen a lot of honest dialogue on TikTok about what it’s like to be a sugar baby, which is when someone is pampered or financially compensated by an older (and typically wealthier) person for the companionship and/or sexual favors they provide.

We recently asked the sugar babies of the BuzzFeed Community to share stories about the inner workings of their profession. Here are their candid responses:

“I dabbled in it during the financial crisis around 2009 and had a ball. Designer bags, trips away, dinner at the Ritz, and I never slept with anyone…”

“I was a plus-size sugar baby and knew a lot of straight-size sugar babies. The treatment of plus-size girls is VASTLY different. Sugar daddies would expect more from me despite me clearly laying out boundaries that they agreed to because they felt as though I owed them more since they were ‘settling for less than what they deserved…'”

“…Others would try to pay you less than they would a straight-size sugar baby because ‘you’re worth less.’ If you’re anything other than thin and young, it’ll destroy your self-esteem because some sugar daddies can be so abusive and hurtful.”

“I’m 19, and I’ve been a sugar baby for about a year and a half. Honestly, I really enjoy it. I get around £300–£400 per meetup and I’ve found, in my experience, that the sex and the conversations are way better with an older guy…”

“…I’m always up front with them that I’m looking for long term with no emotional attachment though. I’m not looking to fall in love 😬.”

“…My experience has been amazing. I use the site SeekingArrangement. I have only been doing this for three months, but everyone I’ve met is so kind, respectful and polite. They really care about if you’re enjoying yourself. I have never had a guy my age treat me like this. It isn’t just about the money when you really become someone’s sugar baby. You spend time with them, they take you on vacations and shower you with presents. I am a college student and I never need to work again. This is the best opportunity I have come across in my life.”

“As a man, my experiences were pleasant. I got to travel the world, become a certified public accountant, and build my own house…”

“I’ve been doing it for five years now … I was introduced to it by a friend’s older sister. Initially, it was weird because all the guys are old and some aren’t very attractive, but you get over it. The men will test you — an arm around the shoulder first, then waist, then who knows what next. I’ve found that most of the men respect boundaries…”

“…My main daddy right now is married, but he pays for my rental house, which is not too far from where he and his family live. Everyone always asks about sex, but it’s not like that. Yes, sex can happen, but only if you want it to. … One daddy ended up paying for me and my girlfriends to party in Vegas. He was with us the whole time (weird), BUT he paid for everything for all of us — food, cabanas, clubs, shopping! He was very adamant that I stay with him in his suite all weekend. It all depends on the girl. I do not work full-time, I actually make my living by reselling the designer gifts I receive. I have no need for multiple Birkin bags, but the money I get from them is going to buy me a house. I’m more than halfway there!”

“Long-term sugar baby here. I now have savings, an investment portfolio, bonds, priceless designer pieces (that I also see as investments) and a relatively stress-free life. I’m on my third long-term arrangement in six years, living in central London. He’s currently teaching me how to buy and trade Bitcoin and crypto…”

“…He’s incredibly sweet, loving, noninvasive in my day-to-day life, an emotional support system, and has a very high-up respectful job (but has no time for marriage or a typical girlfriend). He’s helped me get my drivers license, a car, and sends me weekly books and ‘intelligence homework’ to help me broaden my knowledge and keep up with him. I’m currently registered under his company and he acts as my guarantor and reference if I ever decide to work. However, with the help he’s given me and the money, I probably won’t have to. He drew up a 10-page agreement with all the things we wanted and expected from our arrangement, and I’m in the best position I’ve ever been in in my life.”

“I was briefly a sugar baby in college when I was 25. Honestly, it wasn’t a bad experience. I just was in a bad situation with no other options: I was at the end of my first year of college and my parents could no longer afford the tuition to the private university I was attending…”

“…I eventually went on a couple of dates and decided to go with a sugar daddy in his sixties because he agreed to two dates a month, monthly tuition payments, and a monthly cash allowance. When my parents asked where I got the money for school, I said that I found a job as an assistant and could now cover tuition. … I found that maintaining that lifestyle was really stressful and I really just wanted to enjoy college.”

“I had a sugar daddy when I was around 20. We started off as friends and he kept offering me stuff, even if I wasn’t asking for it. He let me know that he liked me and that I didn’t have to reciprocate. He was just so nice and kind that I gave in…”

“…I knew it couldn’t lead to a serious relationship since I wanted a family and he was done having kids. Seven years later, I met a man I was willing to settle down with and we ended our setup, but remained friends.”

“I truly believe you need to be aware of what your role is. True, it’s not (only) about sex, BUT it’s not just about receiving things either. This is a job: you mind the way you look, the things you say, etc. You need to be more or less available for them and you need to give as much as you take. For me, specifically with one daddy, it was all about being cheerful and positive because that’s what he enjoyed…”

“I had one. It was more of a casual sexual relationship than a sugar daddy/baby relationship. He was 20 years older than me and when he came to my city for work, we would hang out. He mainly wanted company while he was in town. That consisted of him taking me to nice dinners or bars and then us going back to his room for the night…”

“…We both knew what kind of relationship we had and knew this wouldn’t be a forever thing. I will say it was freeing to be with him. I could talk to him about stuff regarding friends and family without fear of them finding out because he didn’t know any of them. I also didn’t feel the pressure to commit. … He was a true gentleman and I can honestly say I enjoyed his company. The extra money he’d leave me for shopping or bills didn’t hurt either.”

“I was ‘taken care of’ by a very wealthy older man while I was at university. We were both single, we both enjoyed one another’s company, and we both despised chardonnay. It was advantageous for him to tell his middle-aged buddies he had a 21-year-old girlfriend, I suppose…”

“…I just received some amazing gifts, some phenomenal travel experiences, and ultimately a good friend for a lot of years after we stopped hooking up. I think this is another ‘cultural phenomenon’ that gets blown wildly out of proportion. If you think it’s salacious, you just maaaaaay be a little puritanical. I dunno. You do you.”

“Hi! Long-term sugar baby here. I really enjoy what I do. I have a full-time job and use the money just as extra so I’m not as worried about paying things like rent. I am normally attracted to older men, so it makes it a lot easier for me than it is for some other women…”

“As long as you’re careful in every aspect, it’s a great way to earn some extra money! I have one long-term ‘sugar daddy’ that I meet up with every once in a while. I usually get $400 a time with him, or things like rent paid for.“

“I was a sugar baby for a while. Mostly got cash and shopping sprees — usually $200–300 a meet-up — whether we just went to dinner or otherwise. We would meet up at hotels, mostly. I didn’t do it for long because I decided to go back to work for more stability, but it was definitely worth it while it lasted!”

“I had a number of sugar daddies from ages 18-21. I moved to a different state for college and couldn’t fit in a job with a busy academic schedule, so I was in need of cash…”

“…I met the guys through SeekingArrangement and they’d usually take me out to a nice restaurant or bar and if there was mutual attraction and consent, sex would be involved but that was not the case for all. They’d give me cash and I even had one guy that used cannabis (like me) and gave me some in addition to cash.

And, “I’m a full-time college student and went to meet a guy on Tinder for a hookup. We started seeing each other a few times and after the third time he told me he wanted to be my sugar daddy…”

“…He gives me money for groceries, buys me clothes, and if I go out with friends he gives me money to spend. He has gifts delivered to my house like flowers. He’s only four years older than me and he just wants to spend his money on me. He says it makes him happy to do so, so I can’t complain. I have my own job and go to school, but it’s really nice getting all these things I usually wouldn’t for myself.“

Do you have a story about being a sugar baby? Let us know in the comments below for a chance to be featured in a BuzzFeed Community post or video.

Some submissions have been edited for length and/or clarity.