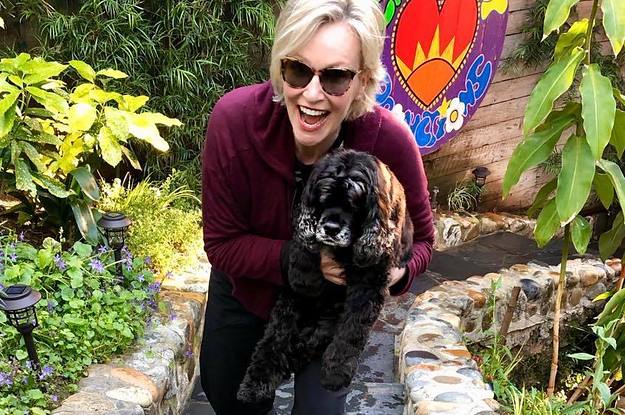 Jane Lynch loves her pets like they’re human beings. That’s why when she had to come up with a name for them, she chose something that made them feel like her own children.

“Well, the first dog I had in college was named Kevin,” she laughed on The Tonight Show Starring Jimmy Fallon. “We’ve had many dogs — cause we adopt seniors and we only get to keep them for a few years — so we have many human names because I knew I wasn’t going to have kids.”

Currently, Lynch has three dogs named Mildred, Benjamin and Olivia. Whenever she decides to get a new pet, she chooses to adopt one than spend tons of money on a certain pooch because Lynch knows there’s “no real reason” to buy a dog.

“There are so many dogs on the streets right now and so many dogs in shelters,” she said. “We have so many of these little beings that are already on the planet that there’s no real reason to go to a breeder unless you’re a professional dog person and you want them to win those dog shows.”

“There’s no reason to go to a puppy mill where they’re making one after the other like cookies — and they’re treating them with about that much care,” the Glee alum added.

Lynch noted that it would be “really great to see puppy mills go away,” and that can possibly happen if people took away the demand for one.

When she’s at home, Lynch also adores spending time with her pets because they’ve given her so much “happiness” and “gratitude.”

“You think, ‘Look how happy they are in this wonderful home with these two parents who just adore them and they adore each other,’” Lynch gushed. How cute!