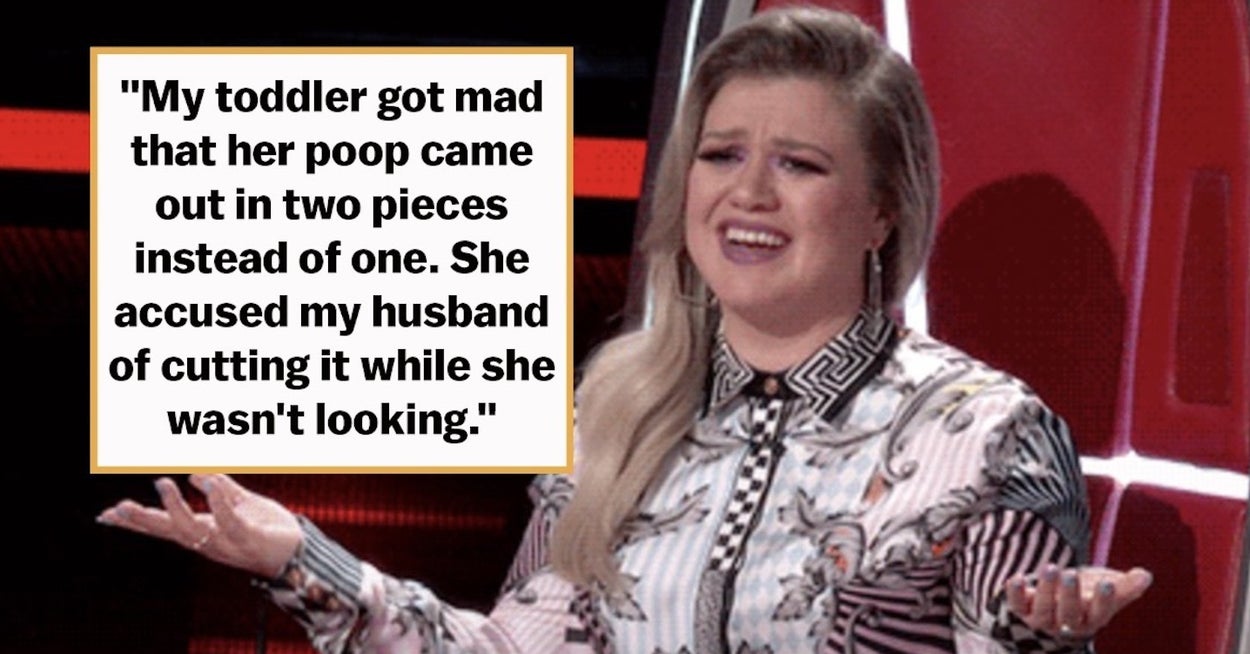 Anyone who has kids will tell you that in the toddler stage, they are hilariously — and sometimes frustratingly — irrational:

Well, Reddit user u/turnturnburn recently asked parents to share the best toddler complaint they’ve ever gotten, and I haven’t laughed this hard in a lonnnnng time:

“My toddler got mad that her poop came out in two pieces instead of one. She accused my husband of cutting it while she wasn’t looking.”

“My toddler demanded to know how to say ‘Hola’ in Spanish, but wouldn’t accept that it was already in Spanish. Cried for hours.”

“My daughter had a complete existential breakdown one day when she found out that she was going to have to pee every day of her life.”

“I watched a friend’s kid have a total breakdown because he wanted to have eaten ice cream. He had ice cream in a bowl in front of him, and he could eat it — but apparently having to go through the mechanical motions of actually eating to get to a later point in time in which he had eaten ice cream was too much for him to bear.”

“My 3-year-old found a mitten on the ground and put it on. He then asked me where the other one was, and I told him I didn’t know. He looked down and said, ‘But I have TWO hands!'”

“When my little sister was a toddler, she once screamed she couldn’t go to sleep because her pajamas were ‘too spicy.'”

“When my son was 3, he had a tummy bug and came to me crying that his ‘butt threw up.'”

“When my nephew was about 3, I found a cookie he had stashed in a couch cushion. It was dry and gross, and it had obviously been there for a while. So I immediately tossed it in the trash. Well, my nephew saw this and immediately burst into full-on snotting, hysterical tears! Through his sobs, he managed to choke out the words, ‘You don’t throw away cookies.'”

“My nephew had a breakdown when his boot wouldn’t fit on his head like a hat.”

“My son once cried when he stuffed his sandwich in the VHS player and a movie about sandwiches didn’t play.”

“When my youngest was 3, he asked for a ‘cheeseburger with no cheese.’ So I gave him a hamburger. Cue the meltdown, in which he sat staring at his food, sobbing.”

“My toddler asked if she could have one piece of candy, and I said, ‘Yes.’ Well, she then asked, ‘Can we compromise?’ and I replied that we didn’t need to compromise because she was already getting exactly what she wanted. But she proceeded to throw a tantrum until I finally agreed that we could compromise, then she left happily.”

“I once yawned with my mouth really wide and my little sister told my mother that I was trying to eat her.”

“Now that I’ve been working at home, whenever I give my 3-year-old grief, he tells me to go back to work.”

“I once overheard a mom at the grocery store let her little boy pick out some ice cream. He chose a chocolate banana popsicle, and his mom said, ‘No.’ Well, the kid started crying, until his mom said, ‘I thought you didn’t like bananas.’ That’s when he immediately stopped crying, said, ‘Oh yeah!’ and picked something else.”

“When I was a toddler, apparently I got upset, saying, ‘My legs are sparkling!’ They had fallen asleep.”

“When I was 5, my parents gave me ice cream with chocolate sauce, and I broke down crying. It took them a while to figure out I was upset at the psycho sick bastard who’d put gravy on my ice cream.”

“My 4-year-old brother once complained, ‘My water is too soupy.’ I still haven’t quite figured it out.”

“When my daughter was 3, I told her to stop trying to draw on the dog with crayons. She threw the crayon on the floor, looked me dead in the eye and yelled, ‘Daddy, you’re ruining my life!'”

“My toddler and I were on a three-hour trip, and she begged to have her window down. I said ‘No,’ because we’d be going 70 miles per hour, and she began to wail! She cried, and cried, and cried, so I turned the music on and tuned her out — and after about 45 minutes, she slowed down, gulped, and asked in a tremulous voice, ‘Mommy, why am I crying?'”

“I laughed so hard! If you don’t remember, I’m not telling you, kid.”

And finally, a story that’s more of a sick, sick burn than anything:

What about you? Has your toddler ever gotten upset over something hilariously irrational? If so, tell us about it in the comments section, and you could be featured in an upcoming BuzzFeed Community post!