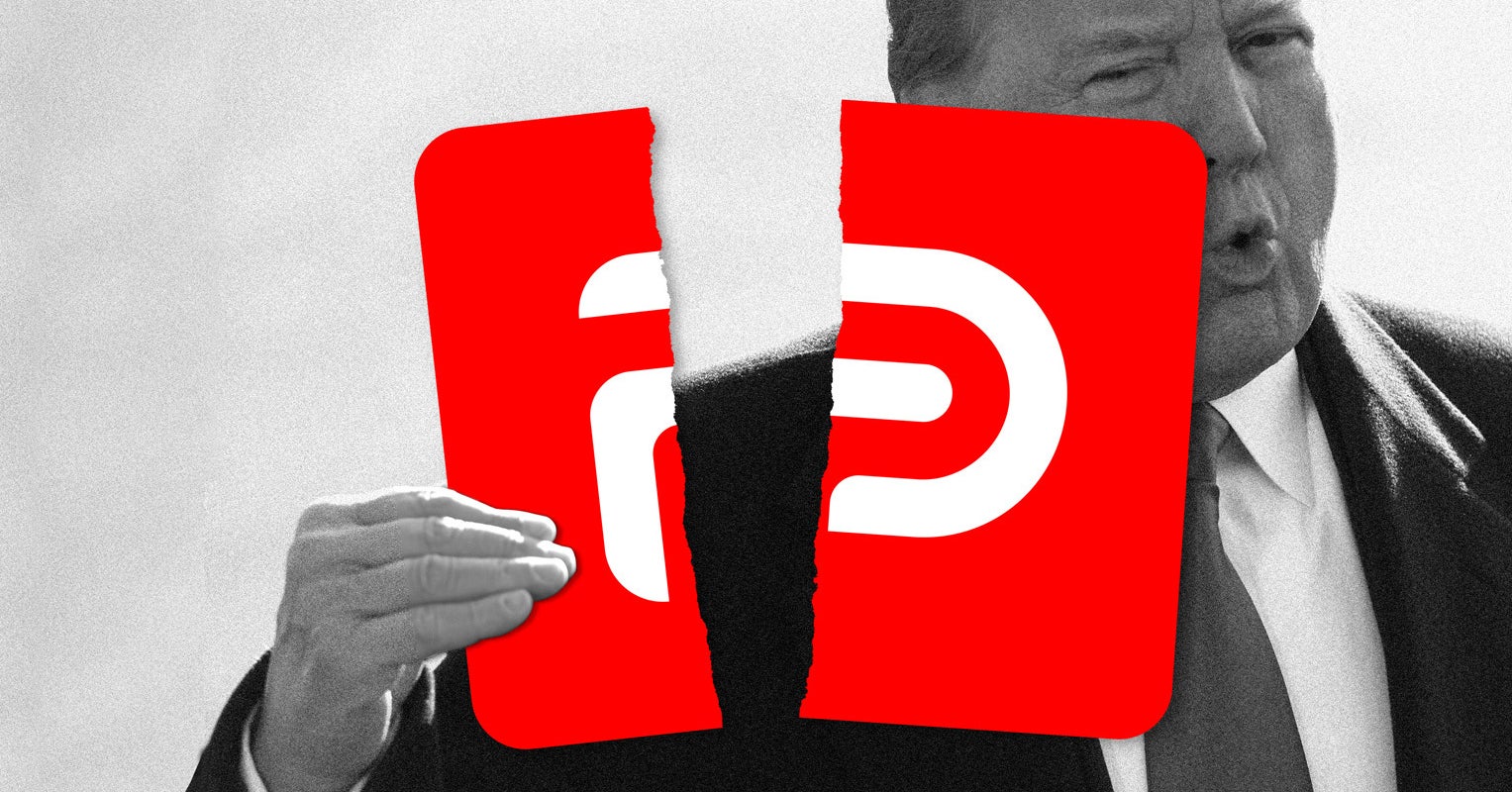 
The Trump Organization negotiated on behalf of then-president Donald Trump to make Parler his primary social network, but it had a condition: an ownership stake in return for joining, according to documents and four people familiar with the conversations. The deal was never finalized, but legal experts said the discussions alone, which occurred while Trump was still in office, raise legal concerns with regards to anti-bribery laws.

Talks between members of Trump’s campaign and Parler about Trump’s potential involvement began last summer, and were revisited in November by the Trump Organization after Trump lost the 2020 election to the Democratic nominee and current president, Joe Biden. Documents seen by BuzzFeed News show that Parler offered the Trump Organization a 40% stake in the company. It is unclear as to what extent the former president was involved with the discussions.

The never-before-reported talks between Trump’s business organization and Parler, a social media network that promises less moderation than mainstream sites and is embraced by the far right, provide more insight into the frantic last weeks of Trump’s presidency. Until the Jan. 6 insurrection, after which Facebook and Twitter suspended or banned him for continuing to sow discord about the election, Trump used those internet platforms to peddle baseless conspiracy theories. While doing so, his representatives actively negotiated to bring him to Parler, which sought to make the president a business partner who would help it compete with Twitter and Facebook by getting him to post his content on its platform first.

Former Trump campaign manager Brad Parscale raised the idea to Trump of taking an ownership stake in Parler during a meeting last year at the White House, according to a source familiar with the negotiations. Parscale had taken an early interest in Parler, and reportedly considered creating an account for Trump on the site in 2019 as a bulwark against Twitter and Facebook.

Four sources told BuzzFeed News that Parscale and Trump campaign lawyer Alex Cannon met with Parler CEO John Matze and shareholders Dan Bongino and Jeffrey Wernick at Trump’s Florida club Mar-a-Lago in June 2020 to discuss the idea. But the White House counsel’s office soon put a stop to the talks, one person with knowledge of the discussions said, ruling that such a deal while Trump was president would violate ethics rules.

“The president was never part of the discussions,” Parscale told BuzzFeed News. “The discussions were never that substantive. And this was just one of many things the campaign was looking into to deal with the cancel culture of Silicon Valley.”

Parscale was replaced as the Trump campaign manager in July.

Discussions were revived in the weeks following the election, according to two people involved, but the deal fell apart after the Capitol invasion. Following that event, Apple and Google removed Parler from their app stores, and Amazon kicked the company off its cloud hosting service, forcing the site offline. The tech giants determined that Parler had not done enough to moderate hate speech and calls for violence on its platform before, during, and after the Jan. 6 insurrection.

When reached by phone on Friday, Wernick, who called himself an adviser to the company, said that there had been discussions with the Trump Organization about bringing Trump onto the platform, but that the former president had not been involved in those conversations. He also said there were inaccuracies in what BuzzFeed News was reporting, but did not provide specifics on what, if anything, was inaccurate.

“We have spoken to several people about potential stakes in the company for producing certain things,” Wernick said. He declined to get into the specifics of negotiations citing nondisclosure agreements he said were in place between Parler and the Trump Organization.

Cannon and Matze declined to comment. Bongino and a Parler spokesperson did not respond to emailed requests for comment.

A Trump Organization spokesperson did not respond to a request for comment.

Founded in 2018 by former college roommates John Matze and Jared Thomson, and Rebekah Mercer, the right-wing political donor and daughter of hedge fund magnate Robert Mercer, Parler focused on building a social network that would serve as an alternative to Facebook and Twitter by taking a more lax approach to content moderation. It billed itself as a site that allowed “free expression.”

While it struggled to gain traction in its early months, it soon became a home for conservative and far-right personalities who had been suspended or banned from mainstream social media. By late 2020, it had become a go-to online gathering place for hate groups, conspiracy theorists, and believers in the QAnon mass delusion, as well as prominent Republican lawmakers, including Sen. Ted Cruz and Rep. Devin Nunes.

On Wednesday, Matze told the Wall Street Journal that the site had 15 million users, including the former president’s sons, Eric Trump and Donald Trump Jr., as well as various current and former members of Trump’s staff.

Donald Trump, however, never maintained a verified account on that platform, and preferred to keep his daily missives to Twitter and Facebook, where his audience was much larger. He had 88 million followers on Twitter and more than 35 million followers on Facebook before his Twitter ban and indefinite Facebook suspension last month. Trump’s son-in-law, Jared Kushner, intervened to keep him off Parler during his last days in office, according to Bloomberg News.

However, in negotiations with the Trump Organization, Parler offered a 40% stake in the company, according to a December document seen by BuzzFeed News and two people with direct knowledge of the proposed deal. Upon completion of that deal, half of that stake would have been given immediately to the Trump Organization, while the other half would have been doled out in tranches over the 24-month period of the agreement.

The Trump Organization, which oversees Trump’s brand and real estate interests, is a collection of hundreds of businesses that are owned or controlled by Donald Trump.

As part of the agreement, Parler wanted Trump to make it his primary social network. According to the documents, Trump would have had to post all his social content — including daily posts, video, and livestreaming — on Parler for at least four hours before putting it on any other platform.

As part of the deal, Parler also asked that Trump link back to Parler when posting to other social media sites or emailing his supporters, and to allow the company to use his email lists to promote its platform. In addition, Parler wanted Trump to make introductions to any potential investors or advertisers.

People familiar with the discussions said they were unclear if Trump was involved with negotiations, which were led from Parler’s side by two shareholders, Wernick and Bongino, a popular right-wing personality with close ties to Trump.

Kathleen Clark, a law professor at the Washington University in St. Louis, said that, had the deal gone through while Trump was still in office, both Parler and the president could have been in violation of anti-bribery laws. Because the former president often used his Twitter and Facebook accounts to make official communications — for example, announcing the firings of government officials — seeking to gain something in exchange for making posts exclusive to another platform could be illegal.

“I think it would have actually violated the bribery statute in that he would have been offered something of value — a stake in this company — in exchange for influencing an official act — the act of where to publish his official comments,” Clark said.

Scott Amey, general counsel at the Project on Government Oversight, a nonpartisan watchdog group, said the news warranted “an immediate criminal investigation.” A company’s mere act of offering a stake for the president’s participation looks unethical and deserves further scrutiny, he noted.

“While then-president Trump bragged that ethics rules didn’t apply to him, bribery laws do apply, and courts have held that Trump’s social media posts constituted official business while he was in office,” Amey said. “His posts were a preferred method for the White House to communicate with the public. If the offer included anything of value, and Trump planned to post on a social media platform while he was still in office, that would almost certainly be illegal, and he should be held accountable.”

Discussions to bring Trump onto Parler were ultimately derailed by the events of Jan. 6. After months of casting doubt on election results and calling for violence on social media platforms, the president’s supporters stormed the US Capitol. Some posted pictures or video of their exploits to Parler, which had become a breeding ground for organizing hate and threats ahead of the riot.

The blowback for the company came fast, culminating in Parler’s removal from Apple and Google’s app stores and Amazon Web Services.

Matze, who said he was fired as Parler CEO last week by Mercer, told the Journal that before he was fired he had tried to implement more content moderation so that Apple and Google would allow the app back into their app stores. He said his suggestion to ban groups based on affiliations with designated domestic terrorism organizations was ultimately resisted by the board.

In a press statement on Thursday, Amy Peikoff, Parler’s chief policy officer, called Matze’s characterization of his termination “misleading” but did not say what exactly was inaccurate.

“The owners and managers of the company worked tirelessly to build a resilient, non-partisan platform dedicated to freedom of expression, civil discourse, and user privacy,” she said in the statement.

With Parler’s management in flux, it’s unclear when the app will come back online. With Matze gone, Mercer — who maintains majority control — has reportedly designated responsibilities to Matthew Richardson, a British lawyer, and Mark Meckler, a former Tea Party activist, according to a source.

Mercer, Richardson, and Meckler did not respond to requests for comment.

Vance did not provide a comment for this story.

With no major social media outlet, Trump, who was impeached for his role in inciting the insurrection and will face a Senate trial next week, has been communicating with the public largely through the email list for his post-presidency office. Parler remains dormant, with a note that reads, “We will resolve any challenge before us and plan to welcome all of you back soon.”

On Friday, Wernick said he believes Parler will be up by next week and that the company has an executive team in place that has “stepped up.”

For now, the most recent post on the site is a Jan. 26 meme from Matze. It features a photo of a masked and gloved Bernie Sanders from Biden’s inauguration with superimposed text that says, “I wish that John guy would hurry up already.” ●