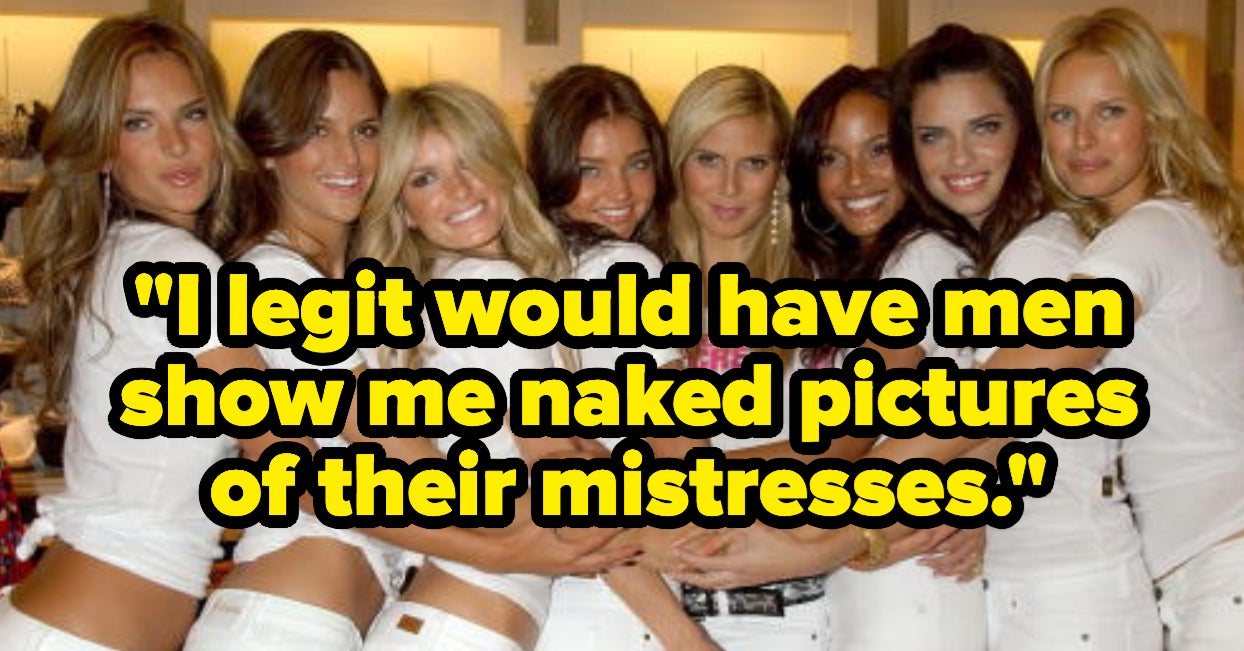 We asked former Victoria’s Secret employees in the BuzzFeed Community to share what it was like working there, and they did not hold back! Here are the most jaw-dropping secrets they revealed:

“The amount of men who would come in buying for separate women blew my mind. One time, a guy came in and bought for his wife, his girlfriend, and his mistress and wanted us to keep track of which stuff was which so he wouldn’t give it to the wrong woman.”

“We had a bathroom literally five steps from the changing room, yet the amount of times we had to call to get literal shit cleaned up was way too many. Another time, I guess someone had started their period while trying things on, and decided to use the panty liners to clean up a huge mess she made but wiped it all over the walls.”

“I worked at VS about 10 years ago. When I worked in the beauty department, I was told it was a requirement to wear at least five different VS Beauty items.”

“One of the wildest things that I saw was when customers would come in shopping from out of the country. They’d fill bags and bags of stuff because they didn’t have any VS stores where they lived. We would ring them up and they’d spend $1,000 at a time without batting an eye.”

“The number of men who would try the, ‘My gf/wife is exactly your size…maybe you could try this on so I can get an idea of what it might look like on her?’ was disgusting.”

“The amount of times you’d find used panties in the panty bar — some with period blood — was way too high. One time we found one that was soaked (in what, we don’t know).”

“Whenever someone returned a bra that had a slight defect, we were trained to cut it up so when the trash got taken out people couldn’t trash pick it. You know, instead of donating to a women’s shelter or something. I worked there almost a decade ago, and I hope to god they changed this policy. It always infuriated me.”

“I often had older women strip down to their bra and undies in the store, then walk around with me and have me help them pick things out. I often reminded people, ‘Please take these back to the dressing room to try on!'”

“Most of it was great, but men are disgusting. One time I answered a phone call and asked how I could help. They had some story of how they had an item they wanted to return. I said, ‘Sure, bring it in with the receipt. We’ll be happy to do it for you.’ He asked me to stay on the phone while he found the receipt. ‘Oh wait, just another minute…’ Then I start hearing a weird noise on the line. ‘Do you hear that noise? Oh, just hold on one more minute.’ I realized he was jerking off.”

“I worked at Victoria’s Secret in 2016 and all new staff had to get their bra sizes fitted on their first day to make sure we didn’t use our staff discount on people other than ourselves.”

“The best part of the job was getting a free bra every time a new style came out, and the worst part was having to deal with creepy male customers. We had one guy that always came in and said he was looking for something for his girlfriend, but never actually bought anything. We nicknamed him ‘The Panty Toucher’ because he just walked around and felt the underwear and would leer at all the employees.”

“We had to CONSTANTLY push the Angels card and were told we had to get three ‘no’s’ out of each customer before we could stop talking about it.”

“The best part was getting a woman in a bra that fit perfectly. I remember a few women who cried in the fitting rooms when they put their shirt on over a new bra and saw how good they looked. I’m glad I was able to help them be more confident.”

“I legit would have men show me naked pictures of their mistresses and say, ‘What bra size do you think she is?'”

“I worked at the PINK store in Union Square, San Francisco, about eight years ago. The best thing was around the holidays, when we’d get tons of uncomfortable-looking dads coming in to buy gifts for their teenage daughters. We’d upsell them a ton because they’d buy whatever just to get out of the store.”

“My coworkers and I would ‘save’ our favorite sale items in a shopping bag, hide it somewhere in the back, then buy the items on the last day of the Semi-Annual Sale when sale prices were cheapest.”

“We’d get all sorts of customers, but my favorites were the old ladies with immaculate silver hair buying the sexiest (and yet tasteful) loungewear we had in stock. One memorable customer had a purple streak in her hair and paid for a black silk robe and matching lace panties with $50 bills.”

“They were desperate for sales associates, but wouldn’t hire any girls who weren’t ‘pretty’ to work on the floor. I was hired for the stock room — after applying for sales associate — and was told that if I had any pretty friends, I should encourage them to apply for sales.”

“I worked for Victoria’s Secret and PINK in the early 2000s, and you would not believe the stuff that went on during my shifts. I used to clean up at night and find the most disgusting things. I found used pads and tampons tucked behind chairs, the sanitary lining stickers from the panties stuck to the mirrors, and some girls would steal underwear and leave their old ones behind. Absolutely abhorrent.”

“If someone returned a beauty product — perfume, lotion, etc. — we would have to ‘damage it out,’ meaning completely empty it into the trash can and return it to corporate.”

“The panty bar was the WORST! Folding hundreds upon hundreds of panties and making sure they’re all in ROYGBIV (rainbow) order was hell.”

“I worked in a test market, and VS considered mass-producing bras with nipples because they thought visible nips were a ‘thing.'”

Submissions have been edited for length/clarity.

Do you have any secrets or stories from your days working at Victoria’s Secret? Share them in the comments!