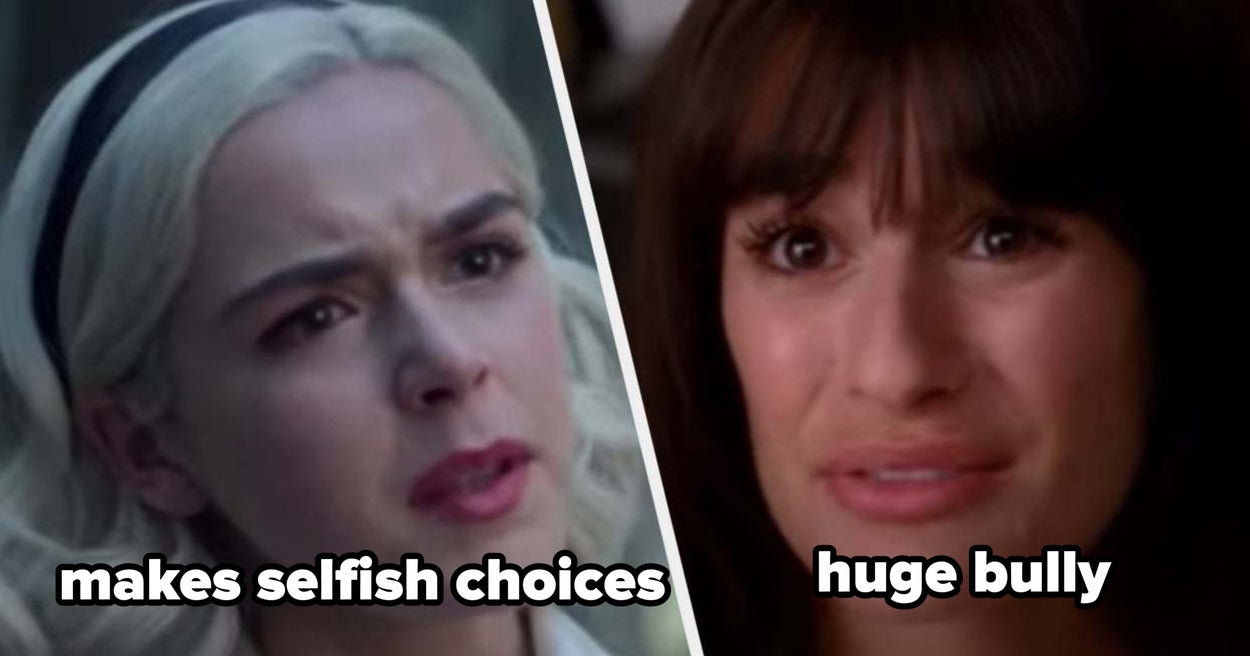 Recently, we asked the BuzzFeed Community what “good” characters are actually the villains of their own stories. Here are some of the best responses:

“In the MCU, Tony Stark basically only cares about things when they affect him.”

“In Brooklyn Nine-Nine, Gina Linetti’s total personality is EXACTLY like every high-school bully everyone had in their childhood.”

“Luther Hargreeves in The Umbrella Academy tried to kill Vanya before she even did anything bad. “

“Not only did Ariel from The Little Mermaid fall in love with a guy she didn’t even know, she also refused to listen to any of her friends or family who all told her not to listen to Ursula.”

“Daniel from Cobra Kai had everything in life, and he couldn’t pull his head out of his ass to see that Johnny wanted to change and actually do some good.”

“On Glee, Rachel Berry sends someone she literally just met to a crackhouse and is always going on about how amazing she is.”

“In The Kissing Booth, Elle literally did the only thing her lifetime best friend asked her to not do.”

“In The Wizard of Oz, Glenda the Good Witch uses Dorothy to commit heinous tasks for her, like murdering her rivals.”

“Dean Winchester from Supernatural lies and tells everyone they’re family until they get in the way of what he wants, and then his only family is Sam.”

“Prince Florian from Snow White falls in love with a 14-YEAR-OLD GIRL AND MARRIES HER.”

“Carrie from Sex and the City is self-obsessed and a shit friend.”

“Annoying, selfish, ungrateful, undeserving — these are all words that could be used to describe Eric Forman from That ’70s Show.”

“Listen, Louise Belcher is literally my favorite character on Bob’s Burgers, and I am even thinking about getting a Louise-themed tattoo, but she causes a lot of problems for the family and never seems to get into any trouble.”

“In Hercules, all Hades wanted was to join the gods in Olympus and have a purpose like them, but Zeus just gave him the role of Lord of the Underworld and ditched him.”

“In Gilmore Girls, Rory Gilmore was very self-centered and treated her boyfriends awfully.”

“The majority of bad things that happened in Chilling Adventures of Sabrina were due to Sabrina’s selfish choices.”

“In The Vampire Diaries, Stefan Salvatore pursued Elena despite knowing that their relationship wouldn’t last.”

“After Maya dies on The 100, Jasper essentially becomes a challenge that gets in the way of dealing with the real problem, and then he tries to convince a bunch of people to kill themselves with him.”

“I [wasn’t upset when] Kate from Lost blew up her mom’s boyfriend (and, as it turns out, her biological father) because he was a creepy, abusive asshole, but then she gets her best friend Tom killed, drugs and leaves the guy she marries, convinces a dude to rob a bank, and almost gets the old man in Australia killed.”

“Bella Swan from Twilight couldn’t give less of a shit about anyone who isn’t a gorgeous immortal vampire, including her parents.”

“Ezra in Pretty Little Liars fully inserted himself into the group for his own goals and convinced a child that it was okay that a grown man was in a relationship with them.”

“Annie from Bridesmaids was so helpless and let her jealousy get the best of her. “

“In Love Actually, they portray Marc’s story line as romantic and set him up as a lovable underdog, but he literally is obsessed with his best friend’s new wife.”

“Gabriella from High School Musical is possessive over Troy.”

Note: some submissions have been edited for length and/or clarity.