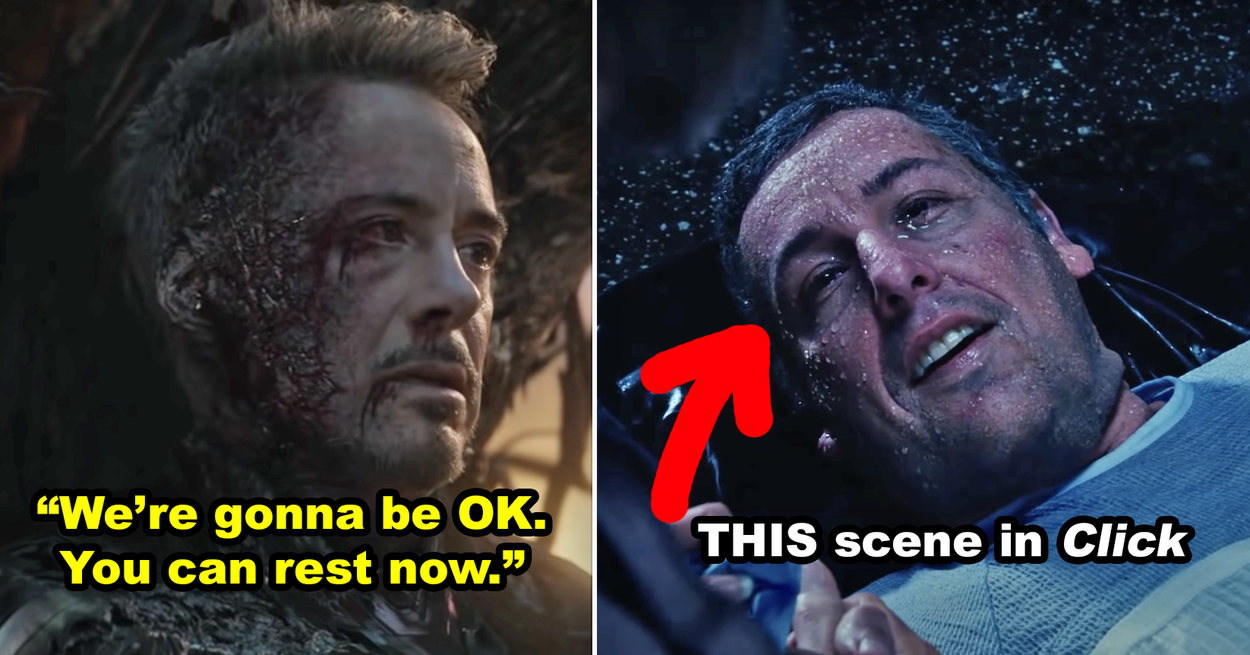 We asked the BuzzFeed Community to tell us which sad movie moments completely caught them off guard. Here are the emotional results.

In Avengers: Endgame, when Tony sacrificed himself to save everyone and bring back the people who were lost in The Blip, and Peter and Pepper said their tearful goodbyes.

In A Star Is Born, when Ally sang Jackson’s unfinished song as a tribute to him after his death, and then the camera abruptly cut to the first time he played it for her.

In Remember Me, when the love story was finally coming together, but then the camera zoomed out to randomly reveal that Robert Pattinson’s character was in one of the Twin Towers on 9/11, and he died.

In Coco, when Miguel returned back to his family and sang “Remember Me” to Coco, and she started singing along because she remembered who her father was.

In Jojo Rabbit, when Jojo was playing in the town square and suddenly discovered his mother’s shoes, realizing she’d been hanged, and he tried to tie her shoes but couldn’t.

In Last Christmas, when Kate learned that Tom was actually dead the whole time, and his heart was the one that saved her during her transplant.

In The Sixth Sense, when Cole finally told his mom about his special abilities, and then he revealed what happened when he spoke to his dead grandmother.

In I Am Legend, when Will Smith’s character had to kill his dog — his only living friend in the entire world — after it got infected.

In Love Actually, when Karen opened her Christmas gift and realized that her husband gave the necklace to another woman, so she excused herself, cried for two minutes, and then had to pull herself together for her kids.

In What to Expect When You’re Expecting, when everything was super happy and cheery, but then it cut to Rosie having a miscarriage in the middle of the night.

In Knives Out, when Marta found out that Harlan’s death was avoidable, and he would have survived if he simply listened to her about calling 9-1-1.

In Inside Out, when Bing Bong sacrificed himself so Joy could save Riley, and he faded away forever.

In La La Land, when the final montage showed Mia and Sebastian living happily ever after, but then it cut back to reality, and it was revealed that Mia actually ended up with a different guy.

In One Day, when Emma was casually riding her bike and randomly got hit by a truck, which instantly killed her.

In The Best Man Holiday, when Lance had to say goodbye to his wife, Mia, and he fell to the ground in tears.

In Parasite, when everything got flipped upside down, and Ki-Jung was attacked and murdered
in front of her family at the birthday party.

In Kingsman: The Golden Circle, when Merlin sacrificed himself and stepped on the land mine so Eggsy and Harry could save the world.

In Atonement, when Briony revealed that she completely made up what happened, so in reality Robbie and Cecilia died and never got to live happily ever after.

And in Click, when Michael realized that he abandoned his entire family for decades, and then he collapsed in the rain and said his final goodbyes to everyone before dying.

Did your favorite not make the list? In the comments below, tell us which unexpectedly sad movie moment completely ruined you.