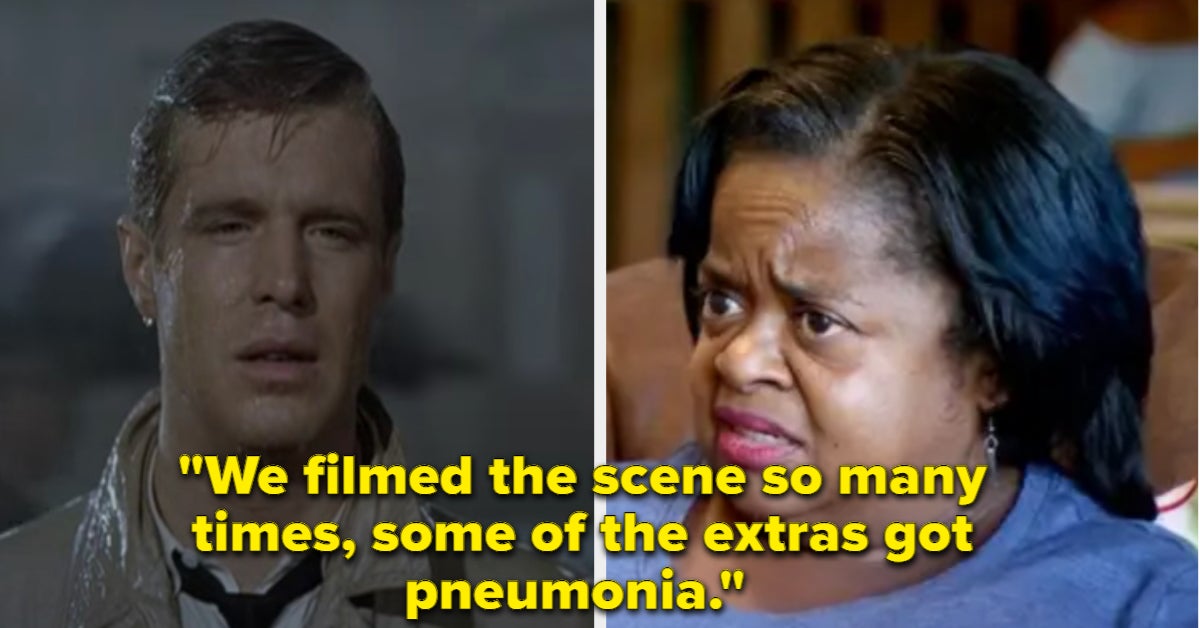 We recently asked the members of the BuzzFeed Community to tell us what it was like when they were an extra in a film. Here are their most interesting responses:

“Sometimes you’re just dancing in silence. They add in the music afterwards. So you could be at a party dancing to nothing. Or at a ‘concert’ with no music.”

“If there is music, you can’t sing along unless they want that specific shot. Otherwise you could ruin a shot if you are singing and they choose to put that with a different part of the song.”

“Once I was an intern on a movie set and one of the scenes involved a concert where people were outside in the rain waiting to get tickets. Because we filmed the scene so many times, some of the extras got pneumonia and us interns had to fill in.”

“We saw Will Ferrell get into a car that just took him to the other side of the parking lot so he didn’t have to walk.”

“There’s LOTS of ‘hurry up and wait.’ I worked on the 2019 Little Women film and as soon as we arrived, we were rushed into our costumes and through hair and makeup. Then it could be up to seven hours before we even went to set, let alone started filming.”

“You get extra pay for weather circumstances. Like if it’s raining in a scene, it’s a bump on your check.”

“A lot of times they want you in muted colors so you don’t stand out in the crowd.”

“If the main actors are in the scene with you and let’s say they are wearing green, they won’t have the extras in the same color. It’s interesting to catch these things in movies now.”

“Unless it’s a period piece, you will most likely supply your own clothes, hair, and makeup. They tell you to bring three outfits usually. And they will give you suggestions to follow.”

“I was an extra for The Kissing Booth 2. We were dressed in summer clothes for a scene we shot from 6 p.m. to 7 a.m. in the middle of winter. One of the main actors spat coffee out for it being too hot and then told us to stop complaining about the cold because they were much colder than us.”

“This person was wearing a two-piece suit and a puffer jacket. I was in a mini skirt and a crop top with a thin jersey and a tiny blanket shared between three people in 5-degree Celsius (41 degrees Fahrenheit) weather but yeah, they were more cold.”

“I once was an extra for a movie shot in central Oklahoma. It was supposed to be a busy New York City scene in like the 1920s. The camera was only shooting from the knee down, so since there was only four or five of us, we had to walk back and forth randomly changing our speeds and patterns so that it looked like a packed NYC sidewalk.”

“We were filming for John Wick 3 in the summer, and yet they had us all in winter clothes, so there was a lot of sweat all around. I made the mistake of wearing heeled boots and — when I tried to sneakily change to sneakers — I got called out by a wardrobe supervisor.”

“They were looooong-ass damn days. They film the same two-minute scene for three hours.”

“If you’re really lucky, a production team member will pity you and give you the good food!”

“The famous people don’t give two shits about you and most come across very rude and full of themselves and it’s mainly the ones who don’t have a ‘name’ yet.”

“There are always a few extras who will do all they can to get noticed, like jumping through the shot to make themselves look taller or to catch someone’s eye.”

“I was an extra for the movie P.S. I Love You, and it was awful! Two days of work, waiting around for hours with no food. When the actors even pointed out the extras were exhausted, production said, ‘So what? They’re only extras.'”

“I was an extra in Step Brothers as an audience member for the talent show scene. I was in high school at the time and since I was a minor, I had to go to ‘set school’ and basically just do homework until we were ready to go.”

“For Step Brothers, we did a bunch of alternates for a heckling chant that got more and more inappropriate. Some of the adult extras couldn’t handle the dirty words coming out of a bunch of teens’ mouths and warned our parents, ‘Do you know what your kids are saying?!?!'”

“All of the extras are actually choreographed into the scene. Most of the time, an extra will be standing with someone from the show off to the side and they’ll tell them where to go and when to go, so it’s not as ‘natural’ as you think, but that’s the beauty of film and TV.”

“Scenes where they are in a restaurant with people in the background are edited to add sound in after. I knew sound mixing was involved, but what I didn’t know was how SILENT it has to be.”

“The people in the background are dead silent, making movements with their mouths and hands, but other than that they are making no noise as the main characters are speaking.”

“I worked as an extra for the first Jurassic World and it was horrible. We were in the direct heat the entire time and had to do a lot of running and such. They did not take care of us. Occasionally, waters and Powerades were handed out, but we were still in the direct sun!”

“You don’t get paid hardly enough, you have to be bossed around and treated like a prop, and it’s not like you are allowed to even look at the actors.”

And finally, “I was an extra in 22 Jump Street. I sat right behind Jonah Hill in an auditorium and heard him hitting on the girl in front of me. He got her number!”

NOTE: These stories are unverified and have been submitted by our BuzzFeed Community.

What stories and secrets do you have from being a movie extra? Let us know in the comments!