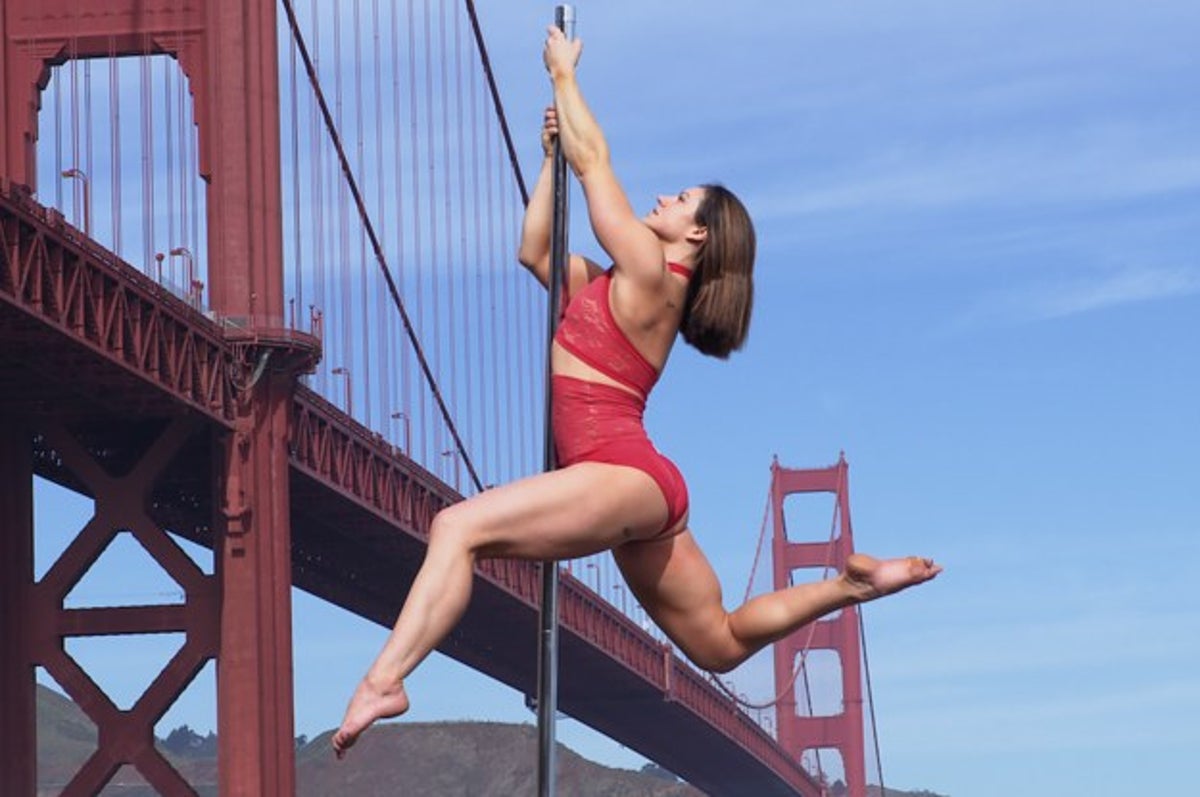 
A new, emotional documentary on Netflix delves into the world of pole dancing, but some women who dance as a profession rather than a hobby or sport are taking issue with it.

Strip Down, Rise Up follows both newbies and diehards who pull tricks on poles, sometimes for fitness, sometimes for competition, or in the case of the main group of students, as a raw journey of healing from trauma. But current and former strippers, including one who can be seen in the film, told BuzzFeed News they felt their profession was erased from the Netflix documentary.

In response to the criticism, director Michèle Ohayon said the film was meant to show how some women use pole dancing for empowerment and transformation, rather than examine the industry at large.

“This in no way minimizes or excludes the experiences of strippers. It is simply a different focus on the pole community,” she said.

The documentary speaks to several women who engage with pole dance for different reasons but centers on a group who signed up for S Factor. Created by Sheila Kelley, S Factor is a studio class where women are encouraged to use erotic movement to connect with their feminity and empower themselves. Those who sign up learn to do pole tricks and are encouraged to wear outfits that make them feel sexy, as well as the platform heels typically worn by strippers. This is all done without mirrors and without the presence of the male gaze, so participants can find eroticism on their own terms.

That sounded interesting to Alyssa Aparicio, 31, a former stripper who now works as a pussy empowerment coach, helping women to embrace their bodies and sexuality. She signed up to be part of the S Factor class for the documentary in 2018 but ended up discontinuing classes halfway through filming because she was frustrated with the lack of stripper representation (although she did not discuss this in class). She is seen in the background of the documentary but is not featured as a speaker.

“We started talking about pole as a tool for empowerment, but there is not really, like, context around it. That was the thing that felt off for me,” Aparicio told BuzzFeed News of her experience in the class.

Early in the film, the S Factor participants open up about their own traumas they want to find healing from. Their stories are heartbreaking and compelling, including a survivor of abuse from Larry Nassar, the former USA Gymnastics doctor convicted of sexually abusing dozens of young athletes. The intimacy of the interviews and the newfound empowerment in the women have been lauded in reviews.

Aparicio said the class’s lack of discussion about where pole work came from also bothered her. During the course, stripping and sex work were not addressed at all, she said, although the participants were taught pole tricks and go to a store in LA where strippers shop to purchase Pleasers.

“I think it being an empowerment class, it doesn’t necessarily have to speak directly to sex work. But I think, having brought pole into it, that they had a responsibility to address that,” she said.

She was also unhappy with how little screentime actual stripping gets in the film. Largely, the profession of stripping goes unmentioned, but there is a nod to Pantera, a stripper and pole performer who inspired Jenyne Butterfly, a pole competitor interviewed in the film. But there are also scenes that some strippers feel seem to juxtapose “empowered” pole work with stripping.

“I believe that taking the pole and reframing it allows for personal reclamation of the feminine body,” Kelley, the S Factor founder, says in a voiceover during the film’s introduction.

A moment later, there’s grainy footage of strippers working in a club while a woman says, “We like to talk about how forward-thinking we are, but the truth of the matter is, the second you say ‘pole dancing,’ they immediately think where men go smoke cigars, drink, and women do lap dances for money.”

“As a stripper and just as a woman watching that movie, I definitely felt that there was a juxtaposition of bad and good. And it seemed like bad was always in the context of real-life, sex work. And good was always in the context of being as separate as we can from that history,” said Aparicio. She believes the film could have benefitted from featuring more voices of former or current strippers to add to that context.

Not including the history of stripping is a problem said April Haze, a 24-year-old stripper in California. Particularly, she felt the voices featured in the film framed strippers as complicit in the oppression of women. Kelley, for example, speaks of how she started S Factor, and how she “knew I had to separate [pole] from this male gaze” to create a space for empowerment.

“To think that we’re just complicit, it’s kind of really disrespectful to us and just takes away our autonomy, which a lot of people want to do all the time,” said Haze.

Neither S Factor nor Kelley replied to BuzzFeed News’ request for comment by publication time.

Haze said that to engage in hallmarks of stripping, like the tricks and the shoes, without acknowledging its roots is just appropriation.

“Myself and a lot of other strippers think that if you want to take the time to get on the pole, wear heels, dance sexy, and reclaim your femininity and sexuality, you should be able to do that while respecting and supporting sex workers and strippers,” she added.

The documentary, released on Feb. 5, comes at a fraught time for strippers, Haze said. COVID-19 has forced the closure of clubs across the country, and concurrently sex workers are facing expulsion from social media platforms. Haze said strippers and sex workers are also often targeted by law enforcement, adding to the stigma and danger of this work.

“So to see women who don’t really have anything to risk by pole dancing, like, joking around and then distancing themselves from strippers, it just feels really disrespectful,” she said.

Filmmaker Ohayon told BuzzFeed News in a statement that she has “enormous respect and love for the entire pole community, including strippers and sex workers, without whom this form of pole dancing would not exist.”

“My film tells a very specific, character-driven story about how sensual dance and pole can be a tool for women to find their own pleasure and expression, away from the male gaze,” she said.

In addition to Butterfly, who says in the film she was inspired by a stripper to get into pole competition, Ohayon notes the film also features Amy Bond. Bond, a former sex worker and pole instructor and competitor, says in the film that pole is an industry built by women and people want to learn a craft that originated with strippers.

“My intention in making this film was to shine a light on female empowerment through sensual dance, to show survivors of abuse who reclaim their power, and to illustrate how some women use sensual movement as a form of healing and transformation,” said Ohayon.

“My intent was not to make a film about the history of pole, per se, but rather to focus on a small segment of a much larger community. And my hope is that it starts a broader conversation and the beginning of a mainstream recognition of how powerful pole dancing and sensual movement can be, inclusive of all voices.”

Bond, the CEO of San Francisco Pole and Dance, told BuzzFeed News that she doesn’t think strippers were intentionally left out of the film, just that it had a different focus. But she added that there’s a larger issue of stripper erasure in society.

“This is largely a result of society stigmatizing stripping and sex work. As a former sex worker, I can attest that it is a heavy burden to carry,” she said.

Bond added that education is key for pole enthusiasts who want to honor the art’s roots. Those looking to learn more about the history of stripping can check out books by Antonia Crane and Lily Burana, who have both worked as strippers. There are also stripper-led labor movements, such as Soldiers of Pole.

“Beyond that, we should support politicians who support sex workers. As we’ve seen in recent elections, voting matters,” she said. “Communicating with our elected representatives about why sex workers’ work matters is also important.”

The tension between the world of pole as a hobby and stripping is a long-simmering that predates Strip Down, Rise Up. According to Vice, pole enthusiasts previously used the hashtag #notastripper to separate themselves from strippers. Strippers then fired back with their own hashtag, #yesastripper.

There are ways to engage in pole as a hobby respectfully, one New York–based stripper who goes by Corinne told BuzzFeed News. She’s taken pole classes that were taught by strippers or that had strippers come in to do exhibitions.

“I don’t think it’s inherently problematic. However, it’s like it’s the overarching culture that is problematic,” she said.

She understands why pole enthusiasts try to distance themselves from the stigma of stripping, but said it’s not doing anyone any favors.

“It will affect everyone, at the end of the day. Especially as a woman, it’s like, Oh, I’m not a stripper, so people will respect me. But you know what, they won’t. Because people that hate strippers just hate women,” she said. “You think you’re gonna separate yourself to better yourself, but, like, good luck. We’re all in the same boat.”

And some in the pole industry are working to end this divide. Carolina Are is a pole instructor based in London who wrote a blog post about why strippers are critiquing Strip Down, Rise Up. She has not worked as a stripper herself but said it’s important to include strippers in the pole community. She said she’s heard of strippers feeling unwelcome in classes, or even being kicked out.

“I always try to make sure that if I do have a platform, I try to include sex workers as much as possible,” she said.

Heel clacks, for example, are a move that she learned through Kitty Velour, a UK pole dancer, that come directly from strippers who work in clubs.

“I know that a history of the move comes from stripping. I will say that in a class. Or I also recommend: If some of you like the stripper style of dancing, please follow this and this instructor, who is also a stripper.”

She also says it’s important to push back on any anti-stripper rhetoric from students and to make sure students can find resources to learn more about supporting sex workers and strippers.

“Give the credit when it’s due.”